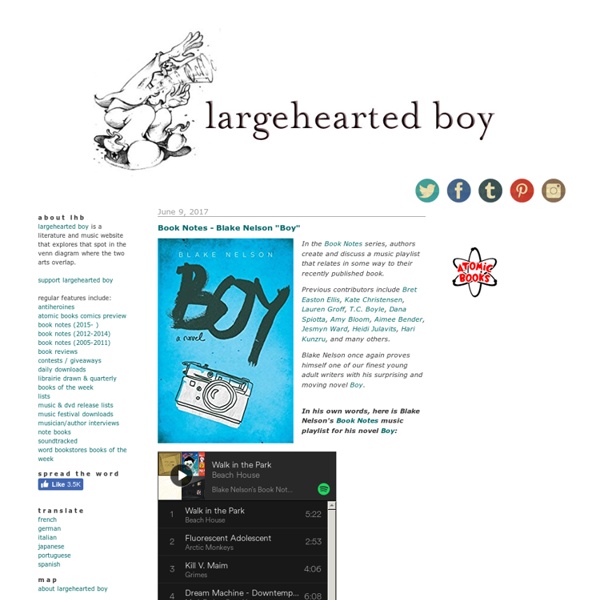 April 27, 2014 Largehearted Boy Weekly Wrap-Up - April 27, 2014 A list of the past week's Largehearted Boy features: Book Notes: (authors create and discuss a music playlist that relates to their book) Adrianne Harun for her novel A Man Came Out of the Door in the MountainBen Peek for his short story collection Dead AmericansElizabeth McCracken for her short story collection ThunderstruckHolly George-Warren for her book A Man Called Destruction: The Life and Music of Alex Chilton, From Box Tops to Big Star to Backdoor ManJoseph Riipi for his novel BecauseJuliet Escoria for her short story collection Black CloudMimi Pond for her graphic novel Over EasySimon Wroe for his novel Chop Chop Weekly New Book Recommendations:

15 Most Popular First Dance Wedding Songs - Summer 2016 When it comes to planning their big day, millennial couples are straying from tradition and making their own rules. New wedding trends like honeymoon funds and mismatched bridesmaids dresses are all the rage, but there's one one wedding tradition that will never go out of style: the first dance. And even though there's a seemingly endless amount of love songs to choose from, there are certain tunes that perennially capture the hearts of couples across the country. Music-streaming service Spotify recently released its list of Top 50 First Dance Songs and, not surprisingly, tracks from Ed Sheeran, Lonestar, and Elvis Presley ranked high.

Music For Kids Who Can't Read Good: Denny's is for winners An Album and a Song is a series where I pick a favorite album and song from a year (working up from 1960) for your listening pleasure. One rule: The year’s album and song can not both come from the same artist. Strangely enough, the Abbey Road got mixed reviews on it’s initial release, but retrospectively it’s rightfully considered The Beatles' last and perhaps greatest masterpiece. The album contains some of the finest songwriting of the band's careers whether it was Lennon's “Come Together”, Harrison’s “Something" (his greatest Beatles contribution), or McCartney’s masterful Side 2 medley, which sees the most legendary band of all time going out in the most grand fashion possible. Michael Jackson obviously had an incredible, groundbreaking solo career but if singing lead on the Jackson 5's "I Want You Back" was his only achievement, he’d still be a legend in my book.

Guardian Music London rapper Little Simz flew halfway across the world to Cape Town, for this Jeremy Cole-directed video for single Gratitude. It features footage shot during this year’s #FeesMustFall movement, which saw a South African university students protest the raising of tuition fees at sit-ins and rallies that often involved violent clashes with armed police. Simz raps her verses over a melancholy, thudding beat and an indie-indebted guitar line while London-based band the Hics take over singing duties in the chorus. For context, the Guardian recently ran a long-form story looking at #FeesMustFall and the origins of educational disparity in a country still divided by the racist policies entrenched by the former apartheid government. Simz’ debut album, A Curious Tale of Trials and Persons, is out now on AGE 101.

I Like __ A Lot I write small. When I set out to write something, I play a game. I think: what could make this simple thing complex? And so I give the writing a limit. Wine & Bowties Cover to Cover How unsung Oakland design duo Phunky Phat Graph-X quietly shaped the aesthetic of '90s rap Tumblr, and I guess the Internet in general, has a tendency to play out trends to death. One of the most prevalent of these in the last few years (which I want to say, like many Internet trends, started with the BasedGod) has been the resurgence of Pen & Pixel-style album artwork. Known for their gaudy, and often straight up ridiculous imagery and fonts, The Houston-based design firm rose to prominence in the late ’90s and early ’00s for its work with Rap-A-Lot, No Limit, and Cash Money. Now, alongside pictures of Actavis pints and naked women, the Pen & Pixel aesthetic has become a Tumblr staple.

Yair Yona: Remember Acoustic guitarist from Tel Aviv makes a statement Yair Yona is an Israeli guitar player whose album Remember is a collection of instrumental guitar tunes that showcase his impressive skills. “Remember” kicks off the album with a gently swaying slide guitar riff, while “Are You Smarter than a 35 Year Old TV Host?” 47 Sites Every Recording Musician Should Visit In a recent “Open Mic” we asked you, “Which music-related sites do you visit regularly?” This article is a summary of the great suggestions given in the comments to that article. You can make the list even longer by commenting on this article.

Artist Profile: Michael Manning Animated GIF via dump.fm LH: For as long as I've been familiar with your work—starting on dump.fm in 2010—you've been incredibly prolific. Back then, you were creating and sharing abstract animated GIFs. I remember you would post hundreds of variations on a single shape. I see that kind of preoccupation, or obsession, come up again and again in your work, with the Phone Arts series, the Microsoft Store Paintings, and most recently, the Sheryl Crow Pandora Paintings.