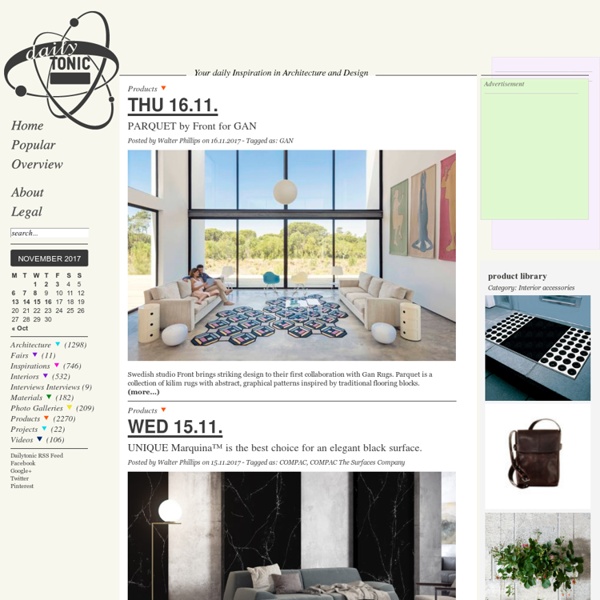 ‘Flamingo’ console by Marco Guazzini, photo: Beppe Brancato The curved neck of the flamingo is referenced in the s-shaped silhouette of Marco Guazzini’s ‘Flamingo’ console table when its sliding drawers are placed at opposite ends. (more…) Lavagna (blackboard) has been created with the idea of evocating positive images, that belong to all of us, like the first day of school, the drawings on the school desk, the colored pencils. Bright rays and contrasts of matter: A line of lamps that brings back to memories, feelings, art works. Handcraft manufacture, Italian taste, fine materials.

The Sexperience 1000 Welcome to The Sexperience 1000, an interactive journey through the sexual experiences and preferences of one thousand British individuals. What’s the favourite sexual position of iPhone users in the North? Do country music lovers over 55 prefer to do it in the dark? Explore the 20 questions of our survey and discover what the great British public get up to between the sheets… Filter Photographing Buildings [Composition Tips] A Guest Post by Michael Toye I am a firm believer, at least with photography, that what you get back is directly related to the effort you put in. As with all activities, it’s certainly not linear and I am the first to admit that you can tip the scale in your favor to achieve some great architectural images armed with only a few basic techniques.

Photo Inspiration Who doesn’t love baby photography, One of the most challenging and time consuming type of photography. It is easily one of the hardest kinds just because of the sheer amount of unexpected drama with the kids. It is also one of the most popular kind of photography too. You see baby photography all around. This gives you an idea... Architectural Photography: Just Like Playing Tetris…Right? “Shooting architecture or home décor is just like playing Tetris,” says Lincoln Barbour, a professional commercial advertising and architectural interior photographer based in Portland, Oregon. “You have to get everything to fit together just right.” Lincoln has his background in web design, so it’s no surprise that Lincoln’s talents lay in creating perfectly composed photos. After he gave up his web design job (post dot-com bubble), Lincoln went to work as studio manager for an architectural photographer.

How to be a stylish designer.  You don’t know how to dress. Fashion has no meaning to you, other than buying a pair of jeans every two years or so. You don’t get the point of wearing anything otther than black. And there you are, a designer. The Flight From Conversation At home, families sit together, texting and reading e-mail. At work executives text during board meetings. We text (and shop and go on Facebook) during classes and when we’re on dates. My students tell me about an important new skill: it involves maintaining eye contact with someone while you text someone else; it’s hard, but it can be done. Over the past 15 years, I’ve studied technologies of mobile connection and talked to hundreds of people of all ages and circumstances about their plugged-in lives.

Smart, dumb, candybar, flip, and brick: a visual history of mobile phones For most of their history, mobile phones have been shrinking. Small meant portable; it even, in the not too distant past, was a sort of status symbol. Remember Motorola’s runaway hit, the ultra-thin Razr? But something funny happened on the smartphone’s way to success.

Pretentious Is Not A Sexual Orientation ‘Sapiosexual’ has to be one of the stupidest sexual ‘identities’ to come along in years. New words with the suffix “-sexual” are like catnip for trendy straight people. In the late ’90s and early aughts, we collectively endured the “metrosexual,” a completely unnecessary term for a man who shaves and dares to have a few pastels in his wardrobe. And in the past year, we have watched the rise and fall of the “lumbersexual,” a completely unnecessary term for a man who doesn’t shave and wears flannel.

The Theory Generation If you studied the liberal arts in an American college anytime after 1980, you were likely exposed to what is universally called Theory. Perhaps you still possess some recognizable talismans: that copy of The Foucault Reader, with the master’s bald head and piercing eyes emblematic of pure intellection; A Thousand Plateaus with its Escher-lite line-drawing promising the thrills of disorientation; the stark, sickly-gray spine of Adorno’s Negative Dialectics; a stack of little Semiotext(e) volumes bought over time from the now-defunct video rental place. Maybe they still carry a faint whiff of rebellion or awakening, or (at least) late-adolescent disaffection. Maybe they evoke shame (for having lost touch with them, or having never really read them); maybe they evoke disdain (for their preciousness, or their inability to solve tedious adult dilemmas); maybe they’re mute. But chances are that, of those studies, they are what remain.