Scientists Are Beginning To Figure Out Why Conservatives Are…Conservative 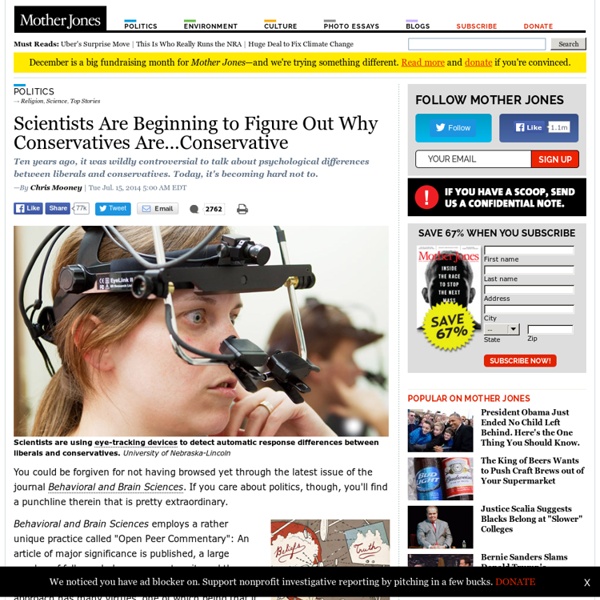 Scientists are using eye-tracking devices to detect automatic response differences between liberals and conservatives.University of Nebraska-Lincoln You could be forgiven for not having browsed yet through the latest issue of the journal Behavioral and Brain Sciences. If you care about politics, though, you'll find a punchline therein that is pretty extraordinary. Click here to read more from Mooney on the science of why people don't believe in science. Behavioral and Brain Sciences employs a rather unique practice called "Open Peer Commentary": An article of major significance is published, a large number of fellow scholars comment on it, and then the original author responds to all of them. The approach has many virtues, one of which being that it lets you see where a community of scholars and thinkers stand with respect to a controversial or provocative scientific idea. That's a big deal. The authors go on to speculate that this ultimately reflects an evolutionary imperative.

Wheeler's delayed choice experiment Wheeler's delayed choice experiment is actually several thought experiments in quantum physics, proposed by John Archibald Wheeler, with the most prominent among them appearing in 1978 and 1984.[1] These experiments are attempts to decide whether light somehow "senses" the experimental apparatus in the double-slit experiment it will travel through and adjusts its behavior to fit by assuming the appropriate determinate state for it, or whether light remains in an indeterminate state, neither wave nor particle, and responds to the "questions" asked of it by responding in either a wave-consistent manner or a particle-consistent manner depending on the experimental arrangements that ask these "questions."[2] This line of experimentation proved very difficult to carry out when it was first conceived. Nevertheless, it has proven very valuable over the years since it has led researchers to provide "increasingly sophisticated demonstrations of the wave–particle duality of single quanta

'The goal is to automate us': welcome to the age of surveillance capitalism We’re living through the most profound transformation in our information environment since Johannes Gutenberg’s invention of printing in circa 1439. And the problem with living through a revolution is that it’s impossible to take the long view of what’s happening. Hindsight is the only exact science in this business, and in that long run we’re all dead. You Don’t Want Hygge. You Want Social Democracy. It’s the holidays, and you long to be cozy. You want to curl up in a plush armchair next to a crackling fire. You want the softest of blankets and wooliest of sweaters. You want to devour grandma’s pecan fudge, get tipsy on eggnog with your cousins, and watch Miracle on 34th Street — mom’s favorite — for the thirty-fourth time. Or maybe neither Christmas nor family gatherings are your thing, but you like the idea of sipping hot toddies and playing board games with a few close friends while outside the snow falls and the lights twinkle. But you can’t have it, because you couldn’t spring for a plane ticket.

10 More Common Faults in Human Thought Humans This list is a follow up to Top 10 Common Faults in Human Thought. Thanks for everyone’s comments and feedback; you have inspired this second list! It is amazing that with all these biases, people are able to actually have a rational thought every now and then. There is no end to the mistakes we make when we process information, so here are 10 more common errors to be aware of. Neoliberalism must be pronounced dead and buried. Where next? What kind of economic system is most conducive to human wellbeing? That question has come to define the current era, because, after 40 years of neoliberalism in the United States and other advanced economies, we know what doesn’t work. The neoliberal experiment – lower taxes on the rich, deregulation of labour and product markets, financialisation, and globalisation – has been a spectacular failure. Growth is lower than it was in the quarter-century after the second world war, and most of it has accrued to the very top of the income scale. After decades of stagnant or even falling incomes for those below them, neoliberalism must be pronounced dead and buried.

What Jeff Bezos can buy with his climate war chest In Cixin Liu's epic science fiction novel The Dark Forest, human civilisation is given 400 years to prepare for the arrival of hostile aliens who hope to conquer us. A new world government bans "escapism" – the notion of leaving Earth behind to find a new home elsewhere – so as to ensure humanity's total commitment to the coming "doomsday battle". Just so, the People's Global Committee for the Salvation of the Earth will surely be pleased that Jeff Bezos, chief executive of Amazon and world's richest human, has decided to devote his resources to saving the planet where he actually lives. In 2018, he said that colonising space was the "only way that [he could] see" to spend his $130bn (£100bn) net worth; now he has pledged $10bn to fight climate change.

Sullivan: Why the Reactionary Right Must Be Taken Seriously Look around you. Donald Trump is now president of the United States, having won on a campaign that trashed liberal democracy itself, and is now presiding over an administration staffed, in part, with adherents of a political philosophy largely alien to mainstream American politics. In Russia, Vladimir Putin has driven his country from postcommunist capitalism to a new and popular czardom, empowered by nationalism and blessed by a resurgent Orthodox Church. 'Alberta has been cheated': Wexit supporters on what drives them On election night in 2019, Saskatchewan, Alberta and interior British Columbia were swept by a sea of blue, with voters overwhelmingly eager for a change in command that would see the ousting of Justin Trudeau as prime minister, and his replacement by Conservative leader Andrew Scheer. Enough was enough, Conservative voters said, of a Liberal government in Ottawa that seemed oblivious to the concerns and real economic hardships of westerners. But a strong showing for the Liberals in Atlantic Canada and the Greater Toronto Area, coupled with a resurgence of the Bloc in Quebec, meant that, for many western Canadians, the election was once again decided before the count reached the Ontario-Manitoba border.