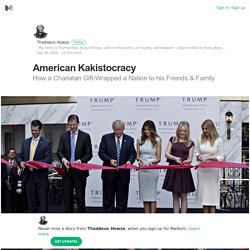 A rarely seen word you should familiarize yourself with. Likely to become the word used to describe this particular presidency in the future. Sullivan: Why the Reactionary Right Must Be Taken Seriously. Look around you. 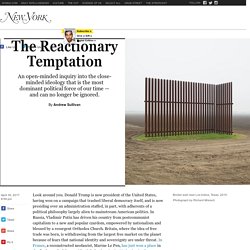 Donald Trump is now president of the United States, having won on a campaign that trashed liberal democracy itself, and is now presiding over an administration staffed, in part, with adherents of a political philosophy largely alien to mainstream American politics. In Russia, Vladimir Putin has driven his country from postcommunist capitalism to a new and popular czardom, empowered by nationalism and blessed by a resurgent Orthodox Church.

Britain, where the idea of free trade was born, is withdrawing from the largest free market on the planet because of fears that national identity and sovereignty are under threat. In France, a reconstructed neofascist, Marine Le Pen, has just won a place in the final round of the presidential election. Armageddon capitalista. Rebecca Solnit: The Coup Has Already Happened. Neoliberalism must be pronounced dead and buried. Where next? What kind of economic system is most conducive to human wellbeing? 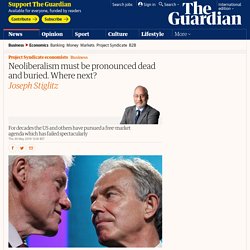 That question has come to define the current era, because, after 40 years of neoliberalism in the United States and other advanced economies, we know what doesn’t work. The neoliberal experiment – lower taxes on the rich, deregulation of labour and product markets, financialisation, and globalisation – has been a spectacular failure. Growth is lower than it was in the quarter-century after the second world war, and most of it has accrued to the very top of the income scale.

Can We Understand Populism Without Calling it Fascist? A Conversation with Nancy Fraser. L'epoca delle piccole narrazioni. View of Authoritarian Neoliberalism: Its Ideological Antecedents and Policy Manifestations from Carl Schmitt’s Political Economy of Governance. Che cosa abbiamo fatto per meritarci Diego Fusaro? Sinthematica - Six Arguments for the Elimination of Capitalism.

10 Potential Alternatives To The Conventional Capitalist System. Politics Some believe our current system of economic organization is starting to fail us, but other than the horrors of Communist collectivism, what alternatives do we really have? 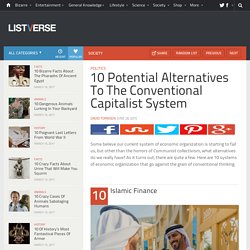 As it turns out, there are quite a few. Here are 10 systems of economic organization that go against the grain of conventional thinking. Salvare il capitalismo o uscire dal suo cadavere? - Alfabeta2 x. Cari esasperati, qualche consiglio per esasperarsi davvero. The World Without Forms – GODS & RADICALS. I said to a friend, we see the darkness, and some go in. 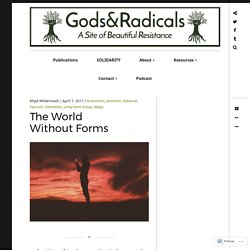 It is the Abyss. We have to find out what is there, to find out if there is meaning. The John Birch Society influencing American politics, 60 years later click2x. The retired candy entrepreneur Robert Welch founded the John Birch Society 60 years ago to push back against what he perceived as a growing American welfare state modeled on communism and the federal government’s push to desegregate America. 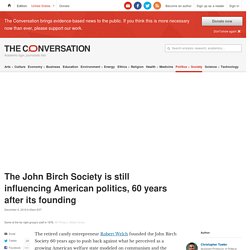 Although Welch’s group has never amassed more than 100,000 dues-paying members, it had garnered an estimated 4 to 6 million sympathizers within four years of its 1958 formation. As a scholar of political history and social movements, I find many parallels between today’s far right and its predecessors. Just as the John Birch Society emerged in the midst of the civil rights movement, today’s far-right movements formed as a reaction to the election of Barack Obama – a milestone for racial equality. The Birchers The original “Birchers,” as John Birch Society supporters are known, were Republicans who believed their party had grown too moderate. Scientists Are Beginning To Figure Out Why Conservatives Are…Conservative. Scientists are using eye-tracking devices to detect automatic response differences between liberals and conservatives.University of Nebraska-Lincoln You could be forgiven for not having browsed yet through the latest issue of the journal Behavioral and Brain Sciences.

If you care about politics, though, you'll find a punchline therein that is pretty extraordinary. Click here to read more from Mooney on the science of why people don't believe in science. Behavioral and Brain Sciences employs a rather unique practice called "Open Peer Commentary": An article of major significance is published, a large number of fellow scholars comment on it, and then the original author responds to all of them. 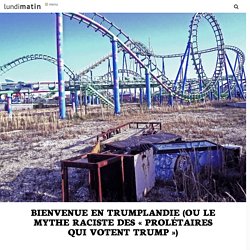 Mes étudiants sont gentils, doux, studieux. Why do capitalist economies have to grow? The Religion of Workism Is Making Americans Miserable. There is nothing wrong with work, when work must be done. And there is no question that an elite obsession with meaningful work will produce a handful of winners who hit the workist lottery: busy, rich, and deeply fulfilled. But a culture that funnels its dreams of self-actualization into salaried jobs is setting itself up for collective anxiety, mass disappointment, and inevitable burnout. In the past century, the American conception of work has shifted from jobs to careers to callings—from necessity to status to meaning. In an agrarian or early-manufacturing economy, where tens of millions of people perform similar routinized tasks, there are no delusions about the higher purpose of, say, planting corn or screwing bolts: It’s just a job. Read: When “love what you do” pushes women to quit The rise of the professional class and corporate bureaucracies in the early 20th century created the modern journey of a career, a narrative arc bending toward a set of precious initials: VP, SVP, CEO.

America once fought a war against poverty – now it wages a war on the poor. In 2013, Callie Greer’s daughter Venus died in her arms after a battle with breast cancer. 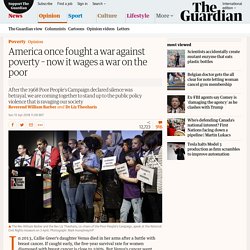 If caught early, the five-year survival rate for women diagnosed with breast cancer is close to 100%. But Venus’s cancer went undiagnosed for months because she couldn’t afford health insurance. 'The goal is to automate us': welcome to the age of surveillance capitalism. We’re living through the most profound transformation in our information environment since Johannes Gutenberg’s invention of printing in circa 1439. 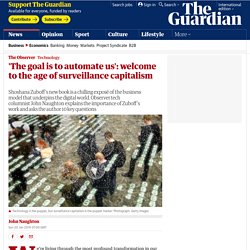 And the problem with living through a revolution is that it’s impossible to take the long view of what’s happening. Hindsight is the only exact science in this business, and in that long run we’re all dead. Printing shaped and transformed societies over the next four centuries, but nobody in Mainz (Gutenberg’s home town) in, say, 1495 could have known that his technology would (among other things): fuel the Reformation and undermine the authority of the mighty Catholic church; enable the rise of what we now recognise as modern science; create unheard-of professions and industries; change the shape of our brains; and even recalibrate our conceptions of childhood.

And yet printing did all this and more. On the Phenomenon of Bullshit Jobs - STRIKE! Ever had the feeling that your job might be made up? That the world would keep on turning if you weren’t doing that thing you do 9-5? Anthropology professor and best selling author David Graeber explored the phenomenon of bullshit jobs for our recent summer issue – everyone who’s employed should read carefully… The Jobs Are Never Coming Back. I just watched former Michigan Governor Jennifer Granholm’s TED Talk.

She provides some nice insight as to what it is really like as a politician trying to grapple with the new realities of the modern world; trying to save jobs in America that just don’t make sense economically any more. Granholm also raises the need to address global climate change as an enigma on equal footing with economic issues. What makes her talk interesting is she sees that a solution to the climate change problem could also be a solution to economic woes, a surprising position given the normal myopia of politicians when it comes to linking environment with economy. While I like the general slant of Granholm’s view, in particular with respect to proposing a feasible means of stimulating the move to green energy through competitive incentivization programs, I have to disagree that even a major shift to green energy in America is somehow going to bring back “good jobs”. The jobs are never coming back. Our Capitalist Society Has Managed to Create “Bullsh*t Jobs”

Abundant, paid work might be an old-world way of measuring prosperity. After all, many manufacturing jobs are being taken over by bots, leaving those without computer science or relevant degrees in the dust, without work. Chris Twomey, policy director of the non-profit organization Western Australian Council of Social Service, argues we shouldn’t be trying to create more jobs; instead, we should be working less. Twomey's essay is one part of a series of essays put out by the Green Institute, all working together to create a larger conversation surrounding a Universal Basic Income (UBI), a plan that gives people unconditional, free money regardless of employment. Your Lifestyle Has Already Been Designed. Well I’m in the working world again. The bad behavior of the richest: what I learned from wealth managers.

Neoliberalism has brought out the worst in us. Complexity Economics Shows Why Laissez-Faire Economics Always Fails. Beware Politicians Bearing Household Analogies. A beginner's guide to the Redpill Right. Debunking Right Libertarianism. The link between capitalism and racism. The end of capitalism has begun. Radical New Economic System Will Emerge From Capitalism's Collapse. The German Economist Calling Time on Capitalism. Slavoj Žižek: Political Correctness is a More Dangerous Form of Totalitarianism. Why do people think economists are charlatans? Worldbuilding Workshop. 3 Means of Waging Personal Financial Revolution Against the Banksters. It’s All Over.

From Post-Growth Society to Sufficiency Politics. Why we should all have a basic income. Lessons From Universal Basic Income Experiments. Antiwork – a Radical Shift in How We View “Jobs” If Not 40 Hours, Then What? Defining the Modern Work Week. Why Work? Breaking the Spell of the Protestant Ethic. A Future Without Jobs? Two Views of the Changing Work Force. Old Economics Based on False ‘Laws of Physics’ L’éternelle nuit des morts vivants – Le blog flegmatique d’Anne Archet.

Related:  Red-Hot   -  el mito de la caverna   -  YH2   -  "Resistance is futile, you will be assimilated." So what?   -  Vidéos inspirantes   -  Research & Epistemology   -  What means neoliberalism   -  Effetto Risorse and collaterals 4   -  Economia   -  Capitalisme   -  Moralia et alia   -  ET 3 - yksilö ja yhteisö   -  COVID   -  Technology scenarios   -  Ideologier   -  YH5 - makrotalous   -  For translation   -  Idee   -  humanities   -  September 2018   -  turok23   -  Scientists Are Beginning To Figure Out Why Conservatives Are…Conservative   -  'The goal is to automate us': welcome to the age of surveillance capitalism   -  On the Phenomenon of Bullshit Jobs - STRIKE!   -  The bad behavior of the richest: what I learned from wealth managers   -  Vivre en troupeau en se pensant libres, par Dany-Robert Dufour (Le Monde diplomatique, janvier 2008)   -  Radical New Economic System Will Emerge From Capitalism's Collapse   -  None of the world’s top industries would be profitable if they paid for the natural capital they use   -  Neoliberalism has brought out the worst in us   -  The end of capitalism has begun   -  Why we should all have a basic income   -  Education   -  Enterprise