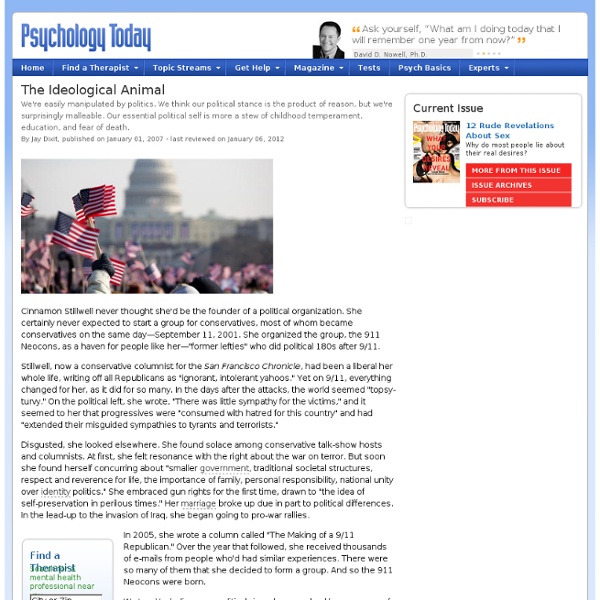 Cinnamon Stillwell never thought she'd be the founder of a political organization. She certainly never expected to start a group for conservatives, most of whom became conservatives on the same day—September 11, 2001. She organized the group, the 911 Neocons, as a haven for people like her—"former lefties" who did political 180s after 9/11. Stillwell, now a conservative columnist for the San Francisco Chronicle , had been a liberal her whole life, writing off all Republicans as "ignorant, intolerant yahoos." Disgusted, she looked elsewhere. In 2005, she wrote a column called "The Making of a 9/11 Republican." We tend to believe our political views have evolved by a process of rational thought, as we consider arguments, weigh evidence, and draw conclusions. Most people are surprised to learn that there are real, stable differences in personality between conservatives and liberals—not just different views or values, but underlying differences in temperament.

Corey Robin - The Politics of Fear Issue #21, Summer 2011 Corey Robin To read the other essays in our symposium on the 9/11 decade, click here . I n my 2004 book Fear: The History of a Political Idea , I argued that “one day, the war on terrorism will come to an end. When I wrote “one day,” I was thinking decades, not years. Yet even before Osama bin Laden was killed and negotiations with the Taliban had begun, it was clear that the war on terror, understood in those terms, had come to an end. When I asked Kerry what it would take for Americans to feel safe again, he displayed a much less apocalyptic worldview. A Kinsley gaffe if ever there was one, Kerry’s comment may have helped seal his fate in that election. Yet, as others in this symposium have noted, the political infrastructure of fear—the bureaucracies and institutions created in the wake of 9/11, the profiling and practices of surveillance, the laws and enforcement agencies—survives. Post a Comment

Mainstream Economics as Ideology: I Rod Hill and Tony Myatt are Professors of Economics at the University of New Brunswick in Saint John and Fredericton (respectively). Their new book, The Economics Anti-Textbook is available from Amazon. They also run a blog at www.economics-antitextbook.com. Interview conducted by Philip Pilkington. Philip Pilkington: Your book seems to me a much needed antidote to the mainstream economics textbooks and can either be read alone or together with them. Tony Myatt: That’s correct. Delightfully for us, Mankiw replied to these students in his New York Times column, saying “I don’t view the study of economics as laden with ideology…It is a method rather than a doctrine….a technique for thinking, which helps the possessor to draw correct conclusions.” Our perspective is that there is an ideology that pervades mainstream economics, especially in the way it is currently practiced and taught. The point is that it is more difficult to argue that there is a bias in neoclassical economics itself.

Edith Macefield Edith Macefield Born Oregon Died June 2008 (aged 86–87) Seattle , Washington, USA Known for Real-estate holdout Edith Macefield's house during construction. (b. 1921 Oregon , d. After her death it was revealed that Macefield willed her house to the new building's construction superintendent, Barry Martin, in gratitude for the friendship he had shown her during the construction. [ 3 ] Martin told the , "Two or three times she was basically going to sell and move, and then I know the last time she ended up falling and breaking some ribs, and that kind of took the gas out of her, and then it was just too much work." [ 7 ] A Ballard tattoo artist has since created a design based on Macefield's house in remembrance of her, and as a commitment to, "holding on to things that are important to you." In July 2009 Barry Martin sold the house to Greg Pinneo for $310,000. [ edit ] See also Nail house ^ Mulady, Kathy (2008-06-16). ^ "Even for $1-million" . ^ Mulady, Kathy (2007-10-03). [ edit ] References

François Burgat Discusses Western and Islamist Roles in Middle Eastern Political Strategy | Tufts Fletcher School Dr. François Burgat is in a good place to critique the Western approach to Middle Eastern politics. French by origin, he has spent the last twenty years as a researcher and diplomat living throughout the Middle East. The Fares Center for Eastern Mediterranean Studies invited Burgat, who is currently the director of the prestigious Institute Français du Proche Orient, to speak about his most recent book, Islamism in the Shadow of Al Qaida. His theory is that the West misunderstands Middle Eastern political tensions by labeling everything Muslim as political Islam and failing to understand its own contribution to the situation. “We over-theologize our understanding of political tensions,” he explained. The history of colonization on the Middle East, Burgat argues, is a significant factor in today’s politics. Al-Qaida gained momentum in the same environment where Islamism and its lexicon pervaded. Arab governments continue to play a role in fueling the radical Islamist discourse.

Mainstream Economics as Ideology: II Rod Hill and Tony Myatt are Professors of Economics at the University of New Brunswick in Saint John and Fredericton (respectively). Their new book, The Economics Anti-Textbook is available from Amazon. They also run a blog at www.economics-antitextbook.com. Interview conducted by Philip Pilkington Philip Pilkington: I think it was Joan Robinson who said something along the lines of “while we may have to teach a limited amount of material, we could at least teach that which is useful”. In your experience do you find that students leave mainstream economics courses equipped to deal with real world issues? This is another way of saying that ‘mainstream economics’ includes a pretty broad range of ideas and that the borders between it and heterodox economics are rather fuzzy. Tony Myatt: We could compare economics to other professions. This raises the question: is economics really a practical science like engineering? Macroeconomics has been in a real mess for quite a while. no text

Pics of World War II: Operation Barbarossa via reddit.com 9/11 and the makers of history - CISAC After 9/11, the administration of US President George W Bush initiated the era of the global war on terror. For many, this was a misguided response to terror attacks. But before the decade was over, US forces invaded two countries and are now fighting shadow wars in Yemen, Somalia, and Pakistan, while an air war continues in Libya. Pentagon commands cover the entire planet, and US military assistance programmes are active in almost every country. Wars reorder politics and values. It is useful to begin by recalling some of what seemed true on September 10, 2001. Today, each of these verities lies broken. Renewed global military commitments have hastened an inevitable US decline. How is it that the received wisdom about the nature of world politics was so badly wrong? The great conceit that blinds us is the idea that the powerful make history just as they please. 'Like cowboys at the rodeo' Epoch-defining dates like 1989 or 9/11 invoke various imagined histories and geographies.

The Sublime Object of Ideology After the success of The Pervert's Guide to Cinema, director Sophie Fiennes and the only philosopher-turned-film-star Slavoj Žižek return with The Pervert's Guide to Ideology. Tonight marks the premiere of the film at the TIFF, with both Žižek and Fiennes in attendance. Bringing his unique style and "penetrating insights" to popular and obscure cinema alike, Žižek is at once captivating and clownish, bringing unique knowledge and interpretation- as well as a deep love of cinema- to a host of films. In this edition, Žižek examines film for a deeper ideological implication, both obvious and undiscovered, and questions these outcomes for our own time. Through skillful editing, Fiennes weaves Žižek into the narrative and histories of films as diverse as Jaws, The Triumph of Will, Brazil and The Sound of Music. Not many films can tackle capitalism, consumerism, left-wing radicalism and philosophy among other things.

Germany: Map of the Occupation Areas via reddit.com Richard A. Clarke: What We’ve Learned From 9/11 His laser-like focus once brought him medals, but on Day 22 of the South African’s murder trial, it was clearly undermining his case—and highlighting his testimony’s inconsistencies. True to state prosecutor Gerrie Nel’s warning to Oscar Pistorius last week, it appears Nel isn’t going away anytime soon. Known in South African legal circles as the Bulldog—or Bull Terrier, or Pitbull, depending on your source—Nel has grilled the accused Paralympian mercilessly for six days now at the Pretoria High Court, to the point where some citizens have approached the South African Human Rights Commission with complaints that Nel’s questioning has bordered on psychological torment. There are whispers that it could be another full week before Nel lets Pistorius out of the witness box, from which the defendant has cried, screamed, cursed, prayed, contradicted, and victimized himself on more than one occasion, sometimes all at once. “I shot out of fear.

The Ideology of Power and the Power of Ideology Few concepts have been so intensively discussed or so widely sponsored as that of “ideology.” Whether read as the expression of social classes or attributed a material independence and efficacy, whether devalued as false and non-scientific or asserted as the necessary element of social practice, “ideology” has become an ineluctable conceptual reference across a range of works dealing with subjects as varied as science and politics, gender and cultural production. In this book, Göran Therborn makes a decisive contribution to the contemporary debate. Beginning with some critical reflections on Louis Althusser’s influential writings in the late sixties, Therborn develops a theory of the formation of human subjects. He then goes on to consider the material matrix of ideologies and the problem of ideological change, the ideological constitution of classes and the characteristics of the discursive order that regulates it.

Incredible pictures of Nazi occupation of Kharkov, Ukraine. Pay attention to anti-Stalin, anti-Jewish and pro-Hitler propaganda posters. via reddit.com War against Islam? Bin Laden’s documents show Obama was right, and Gingrich and Santorum were wrong Photo by CNN/AFP/Getty Images Two years ago, President Obama changed the way the U.S. government talked about its conflict with Osama Bin Laden. The administration announced that we were at war not with “jihadists,” “Islamists,” or even “terror.” Instead, our enemy was al-Qaida, and al-Qaida’s Muslim victims were our friends. Republicans denounced this reframing of the war as a capitulation to radical Islam and political correctness. But now we know, from Bin Laden’s own hand, that the reframing hurt al-Qaida. Will Saletan writes about politics, science, technology, and other stuff for Slate. Follow On May 26, 2010, John Brennan, Obama’s counterterrorism adviser, gave a speech outlining the new language: The next day, the White House released its National Security Strategy. The United States is waging a global campaign against al-Qa’ida and its terrorist affiliates. Usually, this kind of macho windbaggery can’t be falsified. There you have it.

Age of Fracture - Daniel T. Rodgers In the last quarter of the twentieth century, the ideas that most Americans lived by started to fragment. Mid-century concepts of national consensus, managed markets, gender and racial identities, citizen obligation, and historical memory became more fluid. Flexible markets pushed aside Keynesian macroeconomic structures. Racial and gender solidarity divided into multiple identities; community responsibility shrank to smaller circles. Age of Fracture offers a powerful reinterpretation of the ways in which the decades surrounding the 1980s changed America. Cutting across the social and political arenas of late-twentieth-century life and thought, from economic theory and the culture wars to disputes over poverty, color-blindness, and sisterhood, Rodgers reveals how our categories of social reality have been fractured and destabilized.