Answers Call to Bridge the “Digital Divide” 2012 Digital Divide Statistics. Share this post: As we advance further into the 21st century, our use of technology increases at a nearly exponential rate. 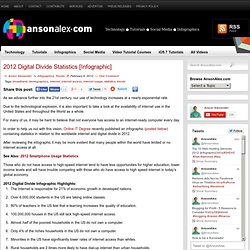 Due to the technological explosion, it is also important to take a look at the availability of internet use in the United States and throughout the World as a whole. For many of us, it may be hard to believe that not everyone has access to an internet-ready computer every day. In order to help us out with this vision, Online IT Degree recently published an infographic (posted below) containing statistics in relation to the worldwide internet and digital divide in 2012. After reviewing the infographic it may be more evident that many people within the world have limited or no internet access at all.

See Also: 2012 Smartphone Usage Statistics. Digital Divide info. According to the Australian Bureau of Statistics, Australia alone had 12,358,000 subscribers not including mobile handsets at the end of June 2013. 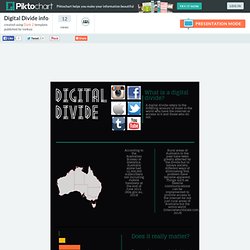 (Abs.gov.au, 2013) Rural areas of Australia in the past have been greatly affected by the divide but in todays society, different ways of eliminating this problem have become apparent. Things such as Satelite communications can be implemented to provide access to the internet for not just rural areas of Australia but the entire world. (internetworldstats.com, 2014) Some people may argue that the internet is purely a luxury item and is not a necessity for all people to be able to use, however other people put forward that the internet is somehow "transforming societies" and helping to improve our mutual understanding. EU Digital Divide Infographic. Www.ascd.org/ASCD/pdf/journals/policypriorities/pp_v17n03_infographic_pdf.pdf. The State of Digital Divides (video & slides) Teachers See Digital Divide among Students. More than half of teachers say students have good access to digital technology at school, but access at home is harder to come by. 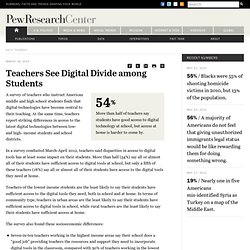 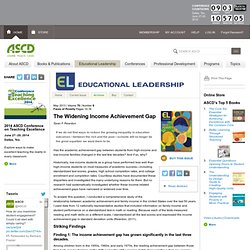 Reardon To answer this question, I conducted a comprehensive study of the relationship between academic achievement and family income in the United States over the last 50 years. I used data from 12 nationally representative studies that included information on family income and student performance on a standardized test in math or reading. Rise of the next digital divide: Women and the web. New global report sheds light on lack of internet access, use by women By Meris Stansbury, Associate Editor Read more by Meris Stansbury January 10th, 2013 Experts believe 600 million new female internet users can be added within the next 3 years. 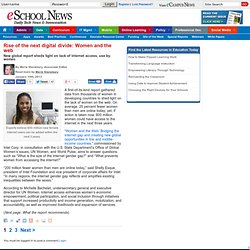 A first-of-its-kind report gathered data from thousands of women in developing countries to shed light on the lack of women on the web. On average, 25 percent fewer women than men are online today; yet, if action is taken now, 600 million women could have access to the internet in the next three years. “Women and the Web: Bridging the internet gap and creating new global opportunities in low and middle-income countries,” commissioned by Intel Corp. in consultation with the U.S. . “200 million fewer women than men are online today,” said Shelly Esque, president of Intel Foundation and vice president of corporate affairs for Intel. 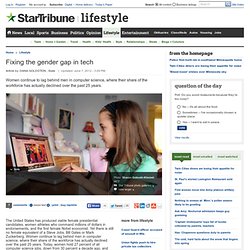 Yet there is still no female equivalent of a Steve Jobs, Bill Gates or Mark Zuckerberg. Women continue to lag behind men in computer science, where their share of the workforce has actually declined over the past 25 years. Today, women hold 27 percent of all computer science jobs, down from 30 percent a decade ago, and account for just 20 percent of undergraduate computer majors, down from 36 percent in 1986.

The tech gap begins at home, where boys get their first computers and video game consoles at a younger age than girls and are more likely to play with toys that build spatial reasoning skills, like Lego. It continues in schools, where female students voice less confidence in math, science and computing, and it persists in the corporate world. Economists expect those trends to continue over the coming decade. Great Digital Divide [Infographic] 183Reactions The Internet has empowered many to find incredible resources and has allowed many to do some wonderful things. 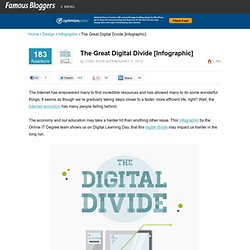 It seems as though we’re gradually taking steps closer to a faster, more efficient life, right? Well, the Internet revolution has many people falling behind. The economy and our education may take a harder hit than anything other issue. This infographic by the Online IT Degree team shows us on Digital Learning Day, that this digital divide may impact us harder in the long run. Created by: Online IT Degree Tony Shin A regular guy, doing regular things. Get our latest articles delivered to your email inbox, plus download our FREE 15 minutes later marketing guide.