Il Calcio the power to unite and divide

The power of the Ultras

Is territorial discrimination racist. AC Milan, Inter Milan, Roma and Torino punished for chants. Il Calcio and National identity. The drug scandal that blackens the name of Juve's team of the Nineties - Europe - World. In 1994 Italy's most successful club, Juventus, had not won the league title for eight years. 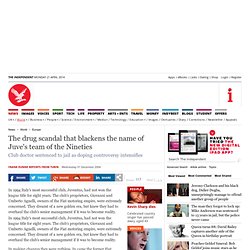 The club's proprietors, Giovanni and Umberto Agnelli, owners of the Fiat motoring empire, were extremely concerned. They dreamt of a new golden era, but knew they had to overhaul the club's senior management if it was to become reality. In making changes they were ruthless. In came the former Fiat executive Antonio Giraudo as managing director; Luciano Moggi, then with Roma, and an acknowledged master of the transfer market, was hired as sporting director; the club's former striker Roberto Bettega was made vice-president. The triumvirate promptly appointed Marcello Lippi, then with Napoli, as the club's new head coach. The changes worked spectacularly. It was a remarkable era, but now the brilliance of that team and their dominance has been seriously questioned, and there are many in Italy who are asking whether it was all too good to be true. Cori Anti Juve. Cori Anti Juve Classici ed Occasionali "Solo rubare, sapete solo rubare" (sull'aria di Guantanamera) "E chi non salta è bianconero, oooh oh oh" (Bella ciao) (all'altra squadra) "Come la Juve, voi siete come la Juve" (Guantanamera) "son contento solo se velo mettiamo nel culo juve juve vaffanculo juve juve vaffanculo" "ciao ciao ciao ciao juve te la vai a pigliar nel culo te la vai a pigliar nel culo" (ciao Mare) 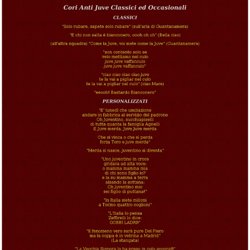 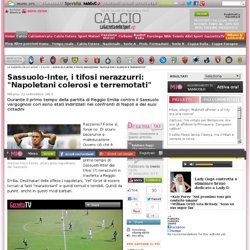 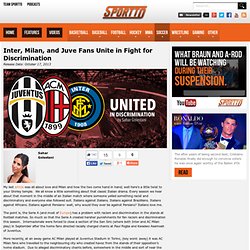 We all know a little something about that classic Italian drama. Every season we hear about that moment in the middle of an Italian match where someone yelled something racist and discriminatory and everyone else followed suit. Italians against Italians. The point is, the Serie A (and most of Europe) has a problem with racism and discrimination in the stands at football matches. More recently, at an away game AC Milan played at Juventus Stadium in Torino, (key word: away) it was AC Milan fans who travelled to the neighbouring city who created havoc from the stands of their opposition’s home stadium.

Is he right? Fans of both Internazionale and AC Milan agree. Allow me to recap. Those are the fans, what do the Presidents of all these clubs think? When The Beautiful Game Turns Ugly. VERONA, Italy -- Right up until he started quoting Hitler and dropping N-bombs, my new friend was a great dude. 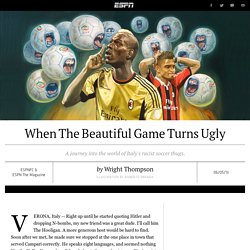 I'll call him The Hooligan. A more generous host would be hard to find. Soon after we met, he made sure we stopped at the one place in town that served Campari correctly. He speaks eight languages, and seemed nothing like the Hellas Verona fans I'd read about, the neo-fascist, neo-Nazi, racist thugs. The Hooligan insisted the Veronese just have a dark sense of humor and refuse to wear the yoke of modern political correctness. Now we are headed toward the terraces of the stadium. The Racialisation of Football in Italy. Oct 29 2013 Ale Barel Di Sant'Albano The conversation in today’s class has spurned me to look into the racialization and politization of football in Italy. 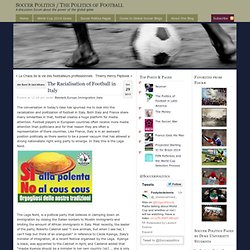 Both Italy and France share many similarities in that, football creates a huge platform for media attention. Football players in European countries often receive more media attention than politicians and for that reason they are often a representation of there countries. Like France, Italy is in an awkward position politically as there seems to be a power vacuum that has allowed a strong nationalistic right wing party to emerge.

The Lega Nord, is a political party that believes in clamping down on immigration by closing the Italian borders to Muslim immigrants and limiting the amount of African immigrants in Italy. The article below demonstrates the recurring problem of racism in Italian football, it illustrates the racial history of Italy, where it began and how it has emerged into such a problem. Must Read: Leave a Reply. Torino-Inter Milan game nearly suspended.