Being Left Handed. One out of every ten people walking down the street is left-handed. 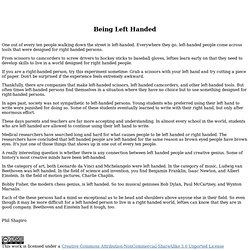 Everywhere they go, left-handed people come across tools that were designed for right handed persons. From scissors to camcorders to screw drivers to hockey sticks to baseball gloves, lefties learn early on that they need to develop skills to live in a world designed for right handed people. If you are a right-handed person, try this experiment sometime: Grab a scissors with your left hand and try cutting a piece of paper. Don't be surprised if the experience feels extremely awkward. Being Left-Handed. Southpaws, lefties, sinistrals. All these terms describe a misunderstood group of people: left-handers. Lefties have been unfairly treated for hundreds of years. Enmity against left-handers is thought to have begun with ancient sun worship. Most of these sun worshippers lived in the Northern Hemisphere and faced south when worshipping the sun. Under these conditions, the sun appears to move from left to right. The Bible contains about 25 unfavorable references to the left hand.

The custom of shaking hands comes from medieval times. This enmity toward lefties can be seen in many languages. Nowadays, most societies, religions, and cultures no longer scorn left-handedness like they used to. It's important to note here that no one is exactly sure how many lefties there are. Disadvantages of lefties in society: Pens and pencils: When a lefty writes with a pen or a pencil, his hand trails over the words he has previously written. Advantages of lefties in society: The Left Handers Blog. Right handed people for the most part probabily think that some crazy left handed person decided that people showed wear a ring on the third finger on the left hand. 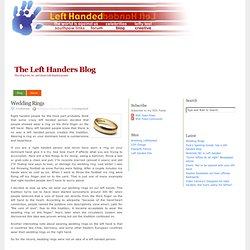 Many left handed people know that there is no way a left handed person created this tradition. Wearing a ring on your dominant hand is cumbersome and hazardous. If you are a right handed person and never have worn a ring on your dominant hand give it a try. See how much if affects what you are trying to accomplish. Here are a few things to try doing: swing a hammer, throw a ball or grab onto a chain and pull. I decided to look up why we wear our wedding rings on our left hands. Another interesting note about wearing wedding rings on the left hand is that in countries like Chile, Germany, and some other Eastern European countries wear their wedding rings on the right hand. So for the record, wedding rings were not an idea of a left handed person. Here are some quotes: If you are a lefty you already know what I”m talking about. The Left-Handed Advantage. It's not easy being a lefty. 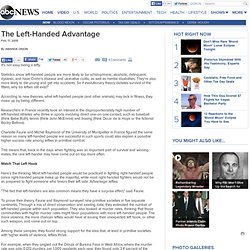 Statistics show left-handed people are more likely to be schizophrenic, alcoholic, delinquent, dyslexic, and have Crohn's disease and ulcerative colitis, as well as mental disabilities. They're also more likely to die young and get into accidents. So if evolutionary theory dictates survival of the fittest, why do lefties still exist? According to new theories, what left-handed people (and other animals) may lack in fitness, they make up by being different.

Researchers in France recently took an interest in the disproportionately high number of left-handed athletes who thrive in sports involving direct one-on-one contact, such as baseball (think Babe Ruth), tennis (think John McEnroe) and boxing (think Oscar de la Hoya or the fictional Rocky Balboa). This means that, back in the days when fighting was an important part of survival and winning mates, the rare left-hander may have come out on top more often. Top Ten Advantages of Being Left-Handed - Associated Content - associatedcontent.com. According to most studies, 7-10% of the adult population is left-handed, with the trait being slightly more common in men. 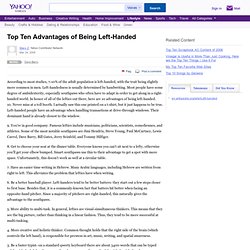 Left-handedness is usually determined by handwriting. Most people have some degree of ambidexterity, especially southpaws who often have to adapt in order to get along in a right-handed world. In honor of all of the lefties out there, here are 10 advantages of being left-handed.