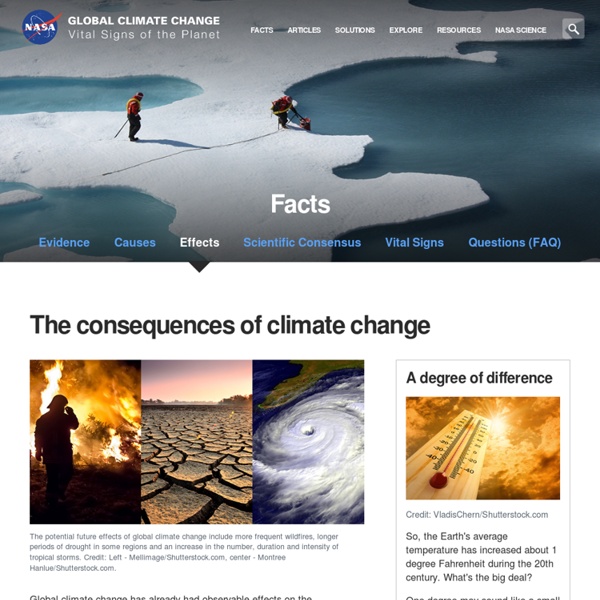 Global climate change has already had observable effects on the environment. Glaciers have shrunk, ice on rivers and lakes is breaking up earlier, plant and animal ranges have shifted and trees are flowering sooner. Effects that scientists had predicted in the past would result from global climate change are now occurring: loss of sea ice, accelerated sea level rise and longer, more intense heat waves. Taken as a whole, the range of published evidence indicates that the net damage costs of climate change are likely to be significant and to increase over time. Scientists have high confidence that global temperatures will continue to rise for decades to come, largely due to greenhouse gases produced by human activities. The Intergovernmental Panel on Climate Change (IPCC), which includes more than 1,300 scientists from the United States and other countries, forecasts a temperature rise of 2.5 to 10 degrees Fahrenheit over the next century. Future effects Temperatures will continue to rise

Higher Temperatures Heat-trapping gases emitted by power plants, automobiles, deforestation and other sources are warming up the planet. In fact, the five hottest years on record have all occurred since 1997 and the 10 hottest since 1990, including the warmest years on record – 2005 and 2010. High temperatures are to blame for an increase in heat-related deaths and illness, rising seas, increased storm intensity, and many of the other dangerous consequences of climate change. During the 20th century, the Earth’s average temperature rose one degree Fahrenheit to its highest level in the past four centuries – believed to be the fastest rise in a thousand years. Scientists project that if emissions of heat-trapping carbon emissions aren’t reduced, average surface temperatures could increase by 3 to 10 degrees Fahrenheit by the end of the century. The planet’s oceans are also warming, which is causing dangerous consequences such as stronger storms, coral bleaching and rising seas.

Global Warming and the American Pika The tiny pika, a cousin of the rabbit that lives on mountain peaks in the western United States, is running out of options. In fact, they have already disappeared from over one-third of their previously known habitat in Oregon and Nevada. Now, the situation is so dire that the U.S. Fish and Wildlife Service is considering the pika for protection under the Endangered Species Act. Because these small mammals have adapted to cold alpine conditions, pikas are intolerant of high temperatures and can die from overheating when exposed for just a few hours. Support National Wildlife Federation's work to protect pikas and other wildlife struggling to survive climate change, habitat loss and other threats >> Adapted to Cold Weather Pikas, which once lived across North America, have been retreating upslope over the past 12,000 years. Why is the Pika in Trouble? Once they move upslope to reach the top and find the temperatures still too warm, the pika has no place else to go. Nowhere to Go

changing landscapes Rising temperatures and changing patterns of rain and snow are forcing trees and plants around the world to move toward polar regions and up mountain slopes. These vegetation shifts will undermine much of the work the conservation community has accomplished to date, with the potential to permanently change the face of Conservancy preserves, local land trusts, and even our national parks. In the tundra, thawing permafrost will allow shrubs and trees to take root. In the Great Plains of the United States, grasslands will likely become forests. As plant communities try to adjust to the changing climate by moving toward cooler areas, the animals that depend on them will be forced to move. Some species and communities such as polar bears and alpine meadows may be left without any remaining viable habitat, putting much of our treasured wildlife at risk.

A Bullet Can't Kill a Dream - Who Was Iqbal? Who Was Iqbal Masih? (click on pictures to see full size jpg) Iqbal Masih was four years old when his father sold him into slavery. There are an estimated 20 million bonded laborers in Pakistan today; at least 7.5 million of these bonded laborers are children. In 1992 Iqbal's life changed dramatically. Iqbal was an articulate, confident, and powerful speaker and an uncompromising critic of child servitude. World of Change: Global Temperatures : Feature Articles The world is getting warmer. Whether the cause is human activity or natural variability—and the preponderance of evidence says it’s humans—thermometer readings all around the world have risen steadily since the beginning of the Industrial Revolution. (Click on dates above to step through the decades.) According to an ongoing temperature analysis conducted by scientists at NASA’s Goddard Institute for Space Studies (GISS) and shown in this series of maps, the average global temperature on Earth has increased by about 0.8°Celsius (1.4°Fahrenheit) since 1880. But why should we care about one degree of warming? The global temperature record represents an average over the entire surface of the planet. A one-degree global change is significant because it takes a vast amount of heat to warm all the oceans, atmosphere, and land by that much. The maps above show temperature anomalies, or changes, not absolute temperature. References Hansen, J., R.

About the Impacts of Climate Change As the Earth heats up, sea levels rise because warmer water takes up more room than colder water, a process known as thermal expansion. Melting glaciers compound the problem by dumping even more fresh water into the oceans. Rising seas threaten to inundate low-lying areas and islands, threaten dense coastal populations, erode shorelines, damage property and destroy ecosystems such as mangroves and wetlands that protect coasts against storms. Sea levels have risen between four and eight inches in the past 100 years. Current projections suggest that sea levels could continue to rise between 4 inches and 36 inches over the next 100 years. A 36-inch increase in sea levels would swamp every city on the East Coast of the United States, from Miami to Boston. Worldwide, approximately 100 million people live within three feet of sea level.

The Reaction To #LikeAGirl Is Exactly Why It's So Important Out of all the controversial ads that aired during the Super Bowl, the one that may have spurred the most vocal backlash was the one that promoted gender equality. The original "Like A Girl" spot, which first aired in June 2014, featured people being asked to throw, run and fight "like a girl." Instead of simply doing these actions, each person weakly reenacted them, by accidentally dropping the ball or slapping instead of punching. But when the same questions were asked of young girls, they threw, ran and fought aggressively -- like anyone would. The implication: To do something "like a girl" is to do it badly, but that negative connotation is something that is only learned over time. Therefore, it's something we can change. The campaign received a lot of positive attention when it originally aired, but it wasn't until Sunday's shortened Super Bowl ad, which approximately 115 million people watched, that the Internet's resident haters really found their voices.

Global Warming : Feature Articles Throughout its long history, Earth has warmed and cooled time and again. Climate has changed when the planet received more or less sunlight due to subtle shifts in its orbit, as the atmosphere or surface changed, or when the Sun’s energy varied. But in the past century, another force has started to influence Earth’s climate: humanity How does this warming compare to previous changes in Earth’s climate? What is Global Warming? Global warming is the unusually rapid increase in Earth’s average surface temperature over the past century primarily due to the greenhouse gases released as people burn fossil fuels. Despite ups and downs from year to year, global average surface temperature is rising. Earth’s natural greenhouse effect Earth’s temperature begins with the Sun. As the rocks, the air, and the seas warm, they radiate “heat” energy (thermal infrared radiation). This absorption and radiation of heat by the atmosphere—the natural greenhouse effect—is beneficial for life on Earth.

Drought, Fire, Floods Climate change is intensifying the circulation of water on, above and below the surface of the Earth — causing drought and floods to be more frequent, severe and widespread. Higher temperatures increase the amount of moisture that evaporates from land and water, leading to drought in many areas. Lands affected by drought are more vulnerable to flooding once rain falls. As temperatures rise globally, droughts will become more frequent and more severe, with potentially devastating consequences for agriculture, water supply and human health. This phenomenon has already been observed in some parts of Asia and Africa, where droughts have become longer and more intense. Hot temperatures and dry conditions also increase the likelihood of forest fires.

Girl, 12, Takes on Sports Catalog for Gender Equality <br/><a href=" News Videos</a> | <a href=" News Videos</a> Copy A 12-year-old girl from Arizona is on a mission to get a major brand to realize that girls like sports, too. A letter McKenna Peterson of Arizona wrote to DICK's Sporting Goods, complaining about how there weren't any girls in a recent basketball catalog, went viral after her father posted it on Twitter this week. "She's the one who goes out and gets the mail and she started looking at it and as I was reading the mail, she said something about how there were no girls in [the catalog]," her dad, Chris Peterson told ABC News today. Courtesy of Chris Peterson PHOTO: McKenna Peterson wrote a letter to Dick’s Sporting Goods to complain about the lack of girls in a catalog. "I looked at it and realized the same thing," said Peterson, a sports photographer in the Phoenix area.

Glossary of climate change acronyms Assigned amount unit (AAU) A Kyoto Protocol unit equal to 1 metric tonne of CO2 equivalent. Each Annex I Party issues AAUs up to the level of its assigned amount, established pursuant to Article 3, paragraphs 7 and 8, of the Kyoto Protocol. Assigned amount units may be exchanged through emissions trading. Abatement Refers to reducing the degree or intensity of greenhouse-gas emissions. Accession An act whereby a State becomes a Party to a treaty already negotiated and signed by other States; has the same legal effect as ratification. Activities implemented jointly (AIJ) Activities carried out under the Convention to mitigate climate change through partnerships between an investor from a developed country and a counterpart in a host country under a pilot phase that ended in the year 2000. Adaptation Adjustment in natural or human systems in response to actual or expected climatic stimuli or their effects, which moderates harm or exploits beneficial opportunities. top CFC Chlorofluorocarbon.