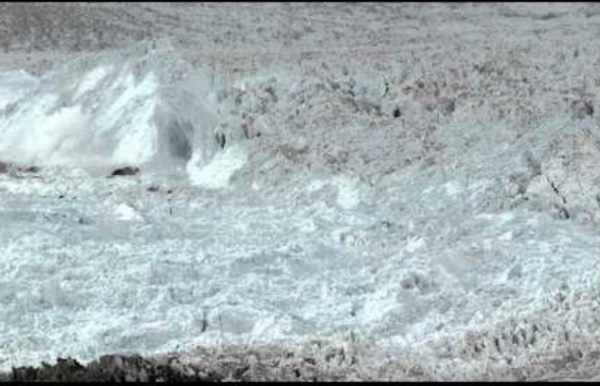 Subglacial bedforms Chris Clark is a professor of Palaeoglaciology at the University of Sheffield. His research interest is glacial geomorphology (the landforms that glaciers and ice sheets produce), which he discusses in this series of videos. You can read more about the presenter here. Ice sheets and their impact on the landscape What happens to the land when a glacier slides over it? Supporting questions

Ed hawkins: Simulated global temperature change This animated spiral portrays the simulated changes in the global averaged monthly air temperature from 1850 through 2100 relative to the 1850 - 1900 average. The temperature data are from Community Climate System (CCSM4) global climate model maintained by the National Center for Atmospheric Research. The simulation is for the IPCC Representative Concentration Pathway 8.5 (RCP8.5) emission scenario. RCP8.5 is the most aggressive scenario in which green house gases continue to rise unchecked through the end of the century, leading to an equivalent of about 1370 ppm CO2, which is roughly four times the concentration at present. The CCSM4 simulation is part of the 5th Climate Model Intercomparison Program (CMIP5) and the data can be downloaded at The 21st century animations are an extension of the graphic ( for the 1850-2010 observed air temperature created by E.

Antarctic ice is melting so fast the whole continent may be at risk by 2100 Antarctic ice is melting so fast that the stability of the whole continent could be at risk by 2100, scientists have warned. Widespread collapse of Antarctic ice shelves – floating extensions of land ice projecting into the sea – could pave the way for dramatic rises in sea level. The new research predicts a doubling of surface melting of the ice shelves by 2050. New Antarctic ice discovery aids future climate predictions A team of British climate scientists comparing today's environment with the warm period before the last ice age has discovered a 65% reduction of Antarctic sea ice around 128,000 years ago. The finding is an important contribution towards the challenge of making robust predictions about the Earth's future climate. Reporting this week in the journal Nature Communications scientists describe how by reconstructing the Earth's climate history through analysis of Antarctic ice cores they can determine what environmental conditions were like during ice ages and past warm periods. This study focussed on sea ice conditions during the most recent warm period - known as the last interglacial - when global temperatures were similar to today.

Why scientists are so worried about the ice shelves of Antarctica The photograph above shows an edge of the Thwaites Ice Shelf. (Jim Yungel/NASA) When it comes to climate change, Antarctica is one of the world’s major places of concern, mostly because of the sheer amount of ice it contains — enough to theoretically cause about 200 feet of sea-level rise if it were all to melt — not that anyone thinks that will happen anytime soon. Still, smaller parts could be destabilized, and understanding how the Antarctic ice sheet will react to future climate change is a big priority for scientists. One important key to building this understanding is studying Antarctic ice shelves, which are large, floating platforms of ice — sometimes spanning hundreds or thousands of square miles — that form where where an ice sheet meets the ocean. [Scientists declare an ‘urgent’ mission – study West Antarctica, and fast]

Carbon emissions 'postpone ice age' Image copyright Ittiz The next ice age may have been delayed by over 50,000 years because of the greenhouse gases put in the atmosphere by humans, scientists in Germany say. They analysed the trigger conditions for a glaciation, like the one that gripped Earth over 12,000 years ago. Melting ice in west Antarctica could raise seas by three metres, warns study A key area of ice in west Antarctica may already be unstable enough to cause global sea levels to rise by three metres of ocean rise, scientists said on Monday. The study follows research published last year, led by Nasa glaciologist Eric Rignot, warning that ice in the Antarctic had gone into a state of irreversible retreat, that the melting was considered “unstoppable” and could raise sea level by 1.2 metres. This time, researchers at Germany’s Potsdam Institute for Climate Impact Research pointed to the long-term impacts of the crucial Amundsen Sea sector of west Antarctica, which they said “has most likely been destabilized”. While previous studies “examined the short-term future evolution of this region, here we take the next step and simulate the long-term evolution of the whole west Antarctic ice sheet,” the authors said in the Proceedings of the National Academy of Sciences. They used computer models to project the effects of 60 more years of melting at the current rate.

Forget the FTSE 500: the Arctic is the real barometer of global risk Humans are naturally risk-averse. We try to avoid disaster zones, and don’t like to fly when there appear to be mechanical problems or heavy fog. However, often information about risk is incomplete, and sometimes we don’t even know the risks we’re taking until after the event. Even for thrill-seekers, identifying and managing risk is a prudent approach. While there isn’t an official “barometer” of global risk, understanding global risk is big business, with companies such as Allianz publishing an annual global business outlook.

Antarctic ice sheet A satellite composite image of Antarctica Antarctic Skin Temperature Trends between 1981 and 2007, based on thermal infrared observations made by a series of NOAA satellite sensors. Skin temperature trends do not necessarily reflect air temperature trends.[1] The Antarctic ice sheet is one of the two polar ice caps of the Earth. It covers about 98% of the Antarctic continent and is the largest single mass of ice on Earth. It covers an area of almost 14 million square km (5.4 million sq. miles) and contains 26.5 million cubic km of ice[2] (6.36 million cubic miles).

Greenland ice sheet The Greenland ice sheet (Greenlandic: Sermersuaq) is a vast body of ice covering 1,710,000 square kilometres (660,000 sq mi), roughly 80% of the surface of Greenland. It is the second largest ice body in the world, after the Antarctic Ice Sheet. The ice sheet is almost 2,400 kilometres (1,500 mi) long in a north-south direction, and its greatest width is 1,100 kilometres (680 mi) at a latitude of 77°N, near its northern margin. Yacht sails through low-ice Arctic sea routes 2016 Image copyright POLAR OCEAN CHALLENGE A project led by adventurer David Hempleman-Adams that aimed to sail the Arctic's North East and North West passages in a single season has completed its quest. The yacht Northabout left Bristol, UK, in June and circled the North Pole in an anticlockwise direction. Its exit from Canada's Lancaster Sound on Monday signalled the successful navigation of both sea routes. Mr Adams initiated the project to highlight Arctic sea-ice decline.