Hull Grammar School. History[edit] The 20th century saw the celebration of the 500th anniversary of the endowment by official founder, Bishop Alcock, and the gradual admission of girls into the formerly boys-only School. 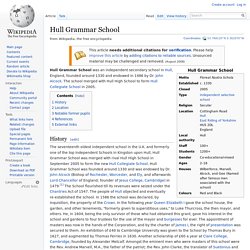 The Education Act of 1944 made the LEA fully responsible for the school. This became just one part of the government's tripartite 'secondary education for all'. In 1969 the school became comprehensive, and remained a state comprehensive until 1988.[2] The local government reorganisation of 1974 saw education transferred from Hull City Council to the newly created Humberside County Council which ran the school until 1988 when, following reorganisation, it was renamed William Gee School for Boys. Andrew Marvell. Early life[edit] Marvell was born in Winestead-in-Holderness, East Riding of Yorkshire, near the city of Kingston upon Hull, the son of a Church of England clergyman also named Andrew Marvell. 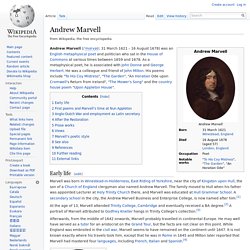 The family moved to Hull when his father was appointed Lecturer at Holy Trinity Church there, and Marvell was educated at Hull Grammar School. A secondary school in the city, the Andrew Marvell Business and Enterprise College, is now named after him.[1] At the age of 13, Marvell attended Trinity College, Cambridge and eventually received a BA degree.[2] A portrait of Marvell attributed to Godfrey Kneller hangs in Trinity College's collection.[3] Afterwards, from the middle of 1642 onwards, Marvell probably travelled in continental Europe. Andrew Marvell (1621–1678) First poems and Marvell's time at Nun Appleton[edit] Circa 1650–52, Marvell served as tutor to the daughter of the Lord General Thomas Fairfax, who had recently relinquished command of the Parliamentary army to Cromwell. Peter Didsbury. Peter Didsbury (born 1946) is an English poet[1] who was born in Fleetwood, Lancashire but lived most of his life in Hull, in the East Riding of Yorkshire. 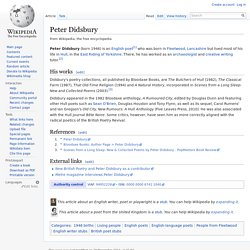 There, he has worked as an archaeologist and creative writing tutor.[2] His works[edit] Didsbury's poetry collections, all published by Bloodaxe Books, are The Butchers of Hull (1982), The Classical Farm (1987), That Old-Time Religion (1994) and A Natural History, incorporated in Scenes from a Long Sleep: New and Collected Poems (2003).[3] Closed cinemas in Kingston upon Hull. The first purpose-built cinema in Kingston upon Hull was the Prince's Hall which was opened in George Street in 1910 (renamed the Curzon 1955). 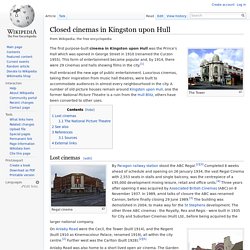 This form of entertainment became popular and, by 1914, there were 29 cinemas and halls showing films in the city.[1] Hull embraced the new age of public entertainment. Luxurious cinemas, taking their inspiration from music hall theatres, were built to accommodate audiences in almost every neighbourhood in the city. A number of old picture houses remain around Kingston upon Hull, one the former National Picture Theatre is a ruin from the Hull Blitz, others have been converted to other uses. Wyke College. Wyke Sixth Form College is a further education Sixth Form College in Hull, England. 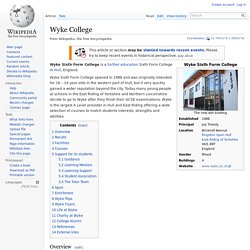 Wyke Sixth Form College opened in 1988 and was originally intended for 16 – 19 year olds in the western part of Hull, but it very quickly gained a wider reputation beyond the city. Today many young people at schools in the East Riding of Yorkshire and Northern Lincolnshire decide to go to Wyke after they finish their GCSE examinations. Wyke is the largest A Level provider in Hull and East Riding offering a wide selection of courses to match students interests, strengths and abilities. Overview[edit] Wyke Sixth Form College opened its doors in 1988 and has grown from strength to strength ever since. Liam Garrigan. 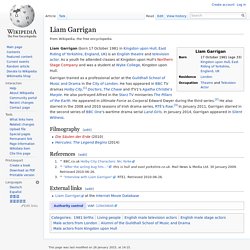 As a youth he attended classes at Kingston upon Hull's Northern Stage Company and was a student at Wyke College, Kingston upon Hull. Filmography[edit] Debra Stephenson. Career[edit] Stephenson was then on TV screens in 1998 in Kay Mellor's comedy drama about women's football, Playing the Field. 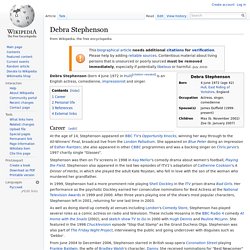 Stephenson also appeared in the last two episodes of ITV1's adaptation of Catherine Cookson's A Dinner of Herbs, in which she played the adult Kate Roystan, who fell in love with the son of the woman who murdered her grandfather. As well as doing stand-up comedy at venues including London's Comedy Store, Stephenson has played several roles as a comic actress on radio and television. These include Hosanna in the BBC Radio 4 comedy At Home with the Snails (2002), and sketch show TV to Go in 2000 with Hugh Dennis and Pauline McLynn. Reece Shearsmith. Early life[edit] Shearsmith studied drama at Bretton Hall College which was merged with the University of Leeds before being sold in 2007. 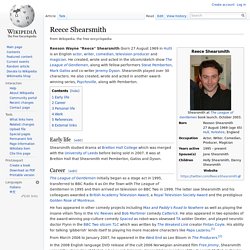 It was at Bretton Hall that Shearsmith met Pemberton, Gatiss and Dyson. Career[edit] The League of Gentlemen initially began as a stage act in 1995, transferred to BBC Radio 4 as On the Town with The League of Gentlemen in 1995 and then arrived on television on BBC Two in 1999. The latter saw Shearsmith and his colleagues awarded a British Academy Television Award, a Royal Television Society Award and the prestigious Golden Rose of Montreux. Maureen Lipman. Ian Carmichael. Ian Gillett Carmichael, OBE (18 June 1920 – 5 February 2010[1]) was an English film, stage, television and radio actor. 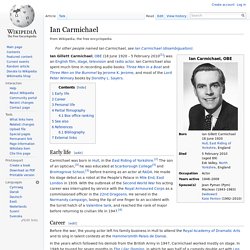 Ian Carmichael also spent much time in recording audio books: Three Men in a Boat and Three Men on the Bummel by Jerome K. Jerome, and most of the Lord Peter Wimsey books by Dorothy L. Sayers. Tom Courtenay. Early life[edit] Courtenay was born in Hull, East Riding of Yorkshire, the son of Annie Eliza (née Quest) and Thomas Henry Courtenay, a boat painter.[1] He attended Kingston High School there. 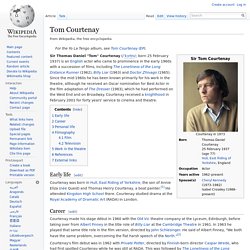 Larkin 25. Philip Larkin. Amy Johnson. This article is about the British aviator. For the American actor, see Amy Jo Johnson. Amy Johnson in Kalgoorlie, Western Australia, July 1930. Amy Johnson and Jason in Jhansi, India in 1932 Amy Johnson at the Kalgoorlie War Memorial, July 1930. Amy Johnson CBE, (1 July 1903 – 5 January 1941) was a pioneering English aviator. John Ward (painter) John Ward (1798–1849)[1] was an English painter from Kingston upon Hull, Yorkshire. He has been described as "the leading marine artist and ship portrait painter in Hull during the first half of the 19th century".[2] John Ward was born on 28 December 1798, the son of a master mariner, Abraham Ward, who also was a painter. John received an education and was apprenticed as a house painter. Spurn Lightship. The Spurn Lightship (LV No 12) is a lightvessel (i.e. a ship used as a lighthouse) currently anchored in Hull Marina in the British city of Kingston upon Hull, England.

The ship was built in 1927 and served for 48 years as a navigation aid in the approaches of the Humber Estuary, were it was stationed 4 1⁄2 miles (7.2 km) east of Spurn Point. The light ship was decommissioned in 1975 and bought/restored by Hull City Council in 1983 before being moved to Hull Marina as a museum in 1987. It is usually open between early April and end September. Access is free but has been at weekends only in the last year or so because of staff shortages. Wheelchair access is not possible. Ferens Art Gallery. Streetlife Museum of Transport. Coordinates: 53°44′38″N 0°19′47″W﻿ / ﻿53.74389°N 0.32972°W﻿ / 53.74389; -0.32972 The Streetlife Museum of Transport is a transport museum located in Kingston upon Hull, England.

The roots of the collection date back to the early 20th century, however the purpose-built museum the collection is housed in was opened in 1989 by the then Hull East MP, John Prescott. Core areas of the collection include Veteran cars, horse-drawn carriages and objects relating to local public transport. Hasholme Logboat. Arctic Corsair. Hull and Barnsley Railway.