'They truly have unbreakable spirits' The little girl in the car seat had a big smile on her face — and a gauze bandage wrapped around her leg. 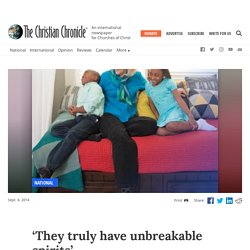 The case manager didn’t know why the bandage was there and hadn’t yet found the nerve to pick her up. Laurie Novak reached down to hold the little girl, Lexi, whom she and her husband, David, had agreed to care for as foster parents. Yale Lets Anyone Take Its Most Popular Class Ever for Free. 7 Things You'll L... When psychology professor Laurie Santos opened enrollment for her happiness course at Yale, a quarter of the student body jumped at the opportunity. 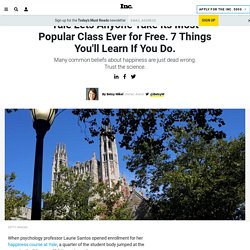 It became Yale's most popular course ever. Yale then adapted the class for the online platform Coursera. If The Worst Came to the Worst... How to Craft A Life You Don’t Need to Escape From. Self-Care: An A To Z Guide. A cabin, Joni Mitchell, and goosebumps. Sometimes I read or listen to something a handful of times and I don’t feel anything. 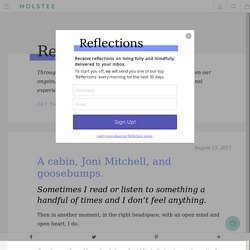 Then in another moment, in the right headspace, with an open mind and open heart, I do. This 32-Minute Morning Routine Is the Best Way to Start Your Day, According t... But fair warning: Sometimes when we think about self-improvement, we emphasize "me" too much at the expense of "we" or others. 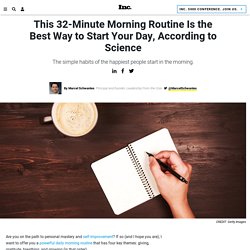 Most of these exercises will benefit you but also the other person. As you make these quick morning rituals habitual and rewire your brain to become more positive, you'll start to see immediate benefits: more inner peace, lasting joy, and, ultimately, greater success, as people will be drawn to you like a magnet. The activities below can be done in as little as a few minutes per day. Recovering From Burnout - Stress Management From MindTools.com. © iStockphoto1Photodiva Open the gate and allow balance back into your life after burnout. 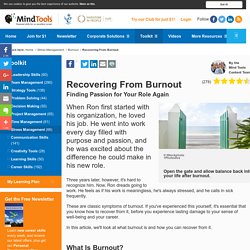 When Ron first started with his organization, he loved his job. He went into work every day filled with purpose and passion, and he was excited about the difference he could make in his new role. Why I'm Retiring from Personal Blogging. Hello, my beautiful friends! 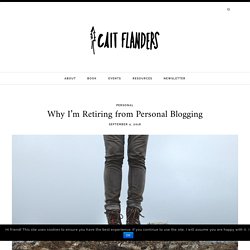 Long time, no talk :) It has been exactly 50 days since my last update; 127 days since I left for my adventure in the UK; 232 days since my first book came out. This year has been so different from what I expected, filled with decisions I didn’t know I would make. Yesterday, I woke up and deleted the 2,522-word post I had written for today. In it, I shared all the details that went into making this decision. Is Giving the Secret to Getting Ahead? The Helpful Guide to Living an Intentional Life. Why Saying You Want Change is Not Enough. What if All I Want is A Mediocre Life? How to Stage Your Home for Living. Best Management Advice - Part 2.

12 Core Books for Your Positive Psychology Reading List. Martin Seligman, Ph.D., defines the positive psychology movement he founded as “the scientific study of the strengths that enable individuals and communities to thrive.” 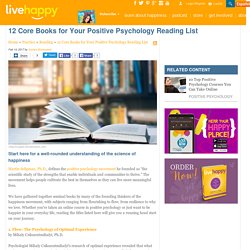 The movement helps people cultivate the best in themselves so they can live more meaningful lives. Warren Buffett’s Best Investment. Our 2017 annual letter is addressed to our dear friend Warren Buffett, who in 2006 donated the bulk of his fortune to our foundation to fight disease and reduce inequity. 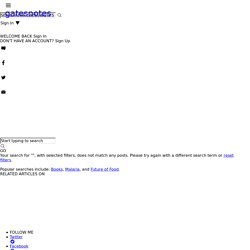 A few months ago, Warren asked us to reflect on what impact his gift has had on the world. Dear Bill and Melinda, Two years ago, I hit the 50-year mark as CEO of Berkshire and used the occasion to write a special report to the company’s owners. 13 Things You Should Give Up If You Want To Be Successful. Unsung - #DenzelWashington takes home the Image Award for... Famous Failures. 10 Insanely Awesome Inspirational Manifestos. There are certain messages that serve to get you “back to one” when you find you’re going off course. 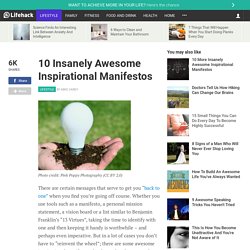 Whether you use tools such as a manifesto, a personal mission statement, a vision board or a list similar to Benjamin Franklin’s “13 Virtues”, taking the time to identify with one and then keeping it handy is worthwhile – and perhaps even imperative. But in a lot of cases you don’t have to “reinvent the wheel”; there are some awesome inspirational manifestos that have already put out there for you to look at and use as a means to set you back on course. Some come in the form of an image, some as a video, and some as nothing more than a blog post. 7 Things Extremely Happy People Do Every Single Day. How do you achieve sustainable happiness? 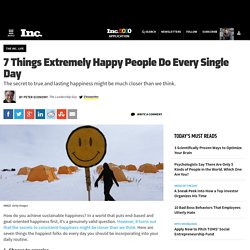 In a world that puts end-based and goal-oriented happiness first, it's a genuinely valid question. However, it turns out that the secrets to consistent happiness might be closer than we think. 16 Goals To Set For Next Year That Are More About Enjoying What You Have Than... Fifteen Things for When the World is Shitty and Terrifying. Laquan MacDonald was seventeen and murdered by a Chicago police officer in cold blood. I watched a video of his murder, along with most of America, right in between reading about how Americans are terrified of letting refugees from war-torn Syria into the country, and reading about how a man with a rifle opened fire at a Planned Parenthood in Colorado yesterday. ThinkParallax: Journey through 2015.

Commencement Speeches. Positive Psychology. Google CFO retires with a candid memo about work/life balance. "After nearly seven years as CFO, I will be retiring from Google to spend more time with my family. " That's how Patrick Pichette, one of Google's highest-ranking executives, led his announcement on Tuesday that he'd be retiring from his role at the company. That line of reasoning has become something of a safe cliché among notable executives leaving their posts. Sheryl Sandberg - Today is the end of sheloshim for my... Two Steps to Designing. Do Nothing for 2 Minutes. 2015 Gates Annual Letter. But we think the next 15 years will see major breakthroughs for most people in poor countries. They will be living longer and in better health.

They will have unprecedented opportunities to get an education, eat nutritious food, and benefit from mobile banking. These breakthroughs will be driven by innovation in technology — ranging from new vaccines and hardier crops to much cheaper smartphones and tablets — and by innovations that help deliver those things to more people.

The rich world will keep getting exciting new advances too, but the improvements in the lives of the poor will be far more fundamental — the basics of a healthy, productive life. Dan Gilbert: The psychology of your future self. Dalai Lama: Meaning of Life. Buffett & Munger: How To Get Smarter. How Olympians Stay Motivated - Olga Khazan. Mindfulness, self-talk, and an obscure chunk of the brain help elite athletes get through the training grind. "Don't wait for perfect." Brandon Stanton HONY. Brandon Stanton has talked with 10,000 strangers and shared their stories with millions of people across the Internet.

Talks to watch when every conceivable bad thing has just happened to you. Dance in a Year. 15 Quotes To Inspire You To Greatness in 2014. Top Five Regrets of the Dying - Death, How to Live Life, Advice. Who are some successful people who failed at their first try? 10 Steps to Achieving Success in Life. Famous Failures. 15 Astonishing Little-Known Destinations Worth Traveling To - The Fairy Pools. Thirty Things I’ve Learned — Nick Crocker. Oprah Winfrey: "Align Your Personality With Your Purpose and No One Can Touch You." Oprah Winfrey was so young when she started working as the late-night anchor on WLAC-TV in Nashville, Tenn., she still had an 11 p.m. curfew at home.

Yet she was so successful at reciting the news on camera at age 19 that she quickly received an offer from a television station in Atlanta that would have quadrupled her salary, bumping it to $40,000. Top 10 Infographics - Fast Co. Photographers have created many iconic images, but Biostatistics professor Roger Peng recently asked “What are the iconic data graphs of the past 10 years?” Infographic Tools - HBR.org. Many technologies and forms of communication experience a painful, necessary moment. 101 Shocking Helpful Quotes for Online Marketing. How to Build a New Habit: This is Your Strategy Guide. According to researchers at Duke University, habits account for about 40 percent of our behaviors on any given day. Understanding how to build new habits (and how your current ones work) is essential for making progress in your health, your happiness, and your life in general.

Related:  for sbm Flip   -  Do Nothing for 2 Minutes   -  Dan Gilbert: The psychology of your future self   -  Talks to watch when every conceivable bad thing has just happened to you   -  Education   -  Enterprise