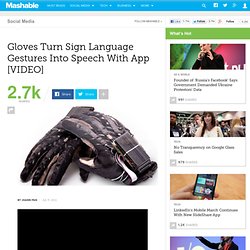 The Enable Talk project won first place at Microsoft's Imagine Cup 2012 this week in Syndey, Australia. Students on the winning Team QuadSquad — Anton Stepanov, Anton Posternikov, and Maxim Osika — beat out 350 students from 75 countries for the gold. Their Enable Talk glove gives deaf and hearing-impaired individuals the ability to communicate with those who don't know sign language. "A while ago, in the supermarket we saw a cashier having difficulties understanding a speech-impaired person and we thought how useful it would be to have a device to overcome this communication barrier," the trio wrote in their Imagine Cup entry. "We were very surprised to find out that no such devices are available on the market. The glove is flexible, easy to use, cheap to produce and battery operated. SEE ALSO: Imagine Cup: Where Students Use Tech to Solve Real-World Problems.

Hearing-aid hackers fine-tuning their own devices. 4 July 2012Last updated at 21:20 ET By Mark Ward Technology correspondent, BBC News Many frustrated hearing aid users want to have more control over the devices If you are short-sighted, usually all it takes is a visit to an optician to get a pair of spectacles to help restore the world to sharp detail. 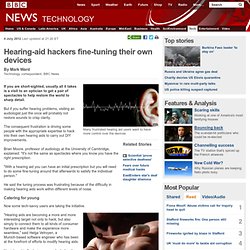 But if you suffer hearing problems, visiting an audiologist just the once will probably not restore sounds to crisp clarity. The consequent frustration is driving some people with the appropriate expertise to hack into their own hearing aids to carry out DIY improvements. Brian Moore, professor of audiology at the University of Cambridge, explained: "It's not the same as spectacles where you know you have the right prescription. "With a hearing aid you can have an initial prescription but you will need to do some fine-tuning around that afterwards to satisfy the individual person. " Catering for young Now some tech-savvy users are taking the initiative. Snsanalytics. DD's film for HeadSmart. Action for Happiness. Robots and New Humans.

Rights for People Rules for Business. World-Mysteries.com. Neuroscience. Johnson. Campaigns. Because Every Country Is The Best At Something. 7 Terrible Abuses Suffered By Women Around The World. Crime NOTE: Some readers may find the text and images on this list disturbing. 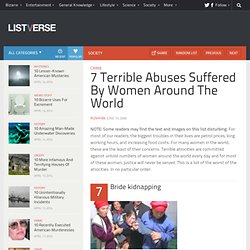 For most of our readers, the biggest troubles in their lives are petrol prices, long working hours, and increasing food costs. For many women in the world, these are the least of their concerns. Terrible atrocities are committed against untold numbers of women around the world every day and for most of these women, justice will never be served. This is a list of the worst of the atrocities. Bride kidnapping is a common practice in Kyrgyzstan and Turkmenistan. Honor Killing is a punitive murder, committed by members of a family against a female member of their family whom the family and/or wider community believes to have brought dishonor upon the family. Bride Burning is a form of domestic violence practiced in parts of India, Pakistan, Bangladesh and other countries located on or around the Indian subcontinent.

Acid Attacks are a violent phenomena that primarily occur in Afghanistan. Lest we Forget. The 7 July 2005 London bombings (often referred to as 7/7) were a series of coordinated suicide attacks in central London, which targeted civilians using the public transport system during the morning rush hour. 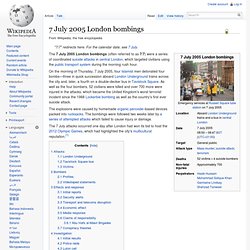 On the morning of Thursday, 7 July 2005, four Islamist men detonated four bombs—three in quick succession aboard London Underground trains across the city and, later, a fourth on a double-decker bus in Tavistock Square. As well as the four bombers, 52 civilians were killed and over 700 more were injured in the attacks, which became the United Kingdom's worst terrorist incident since the 1988 Lockerbie bombing as well as the country's first ever suicide attack.

The explosions were caused by homemade organic peroxide–based devices packed into rucksacks. The bombings were followed two weeks later by a series of attempted attacks which failed to cause injury or damage. Attacks[edit] London Underground[edit] Tavistock Square bus[edit] Locations of the bombings on a Central London tube map. 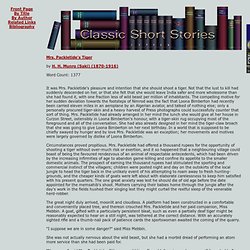 Packletide's Tiger by H. H. Munro (Saki) (1870-1916) Word Count: 1377 It was Mrs. Circumstances proved propitious. The great night duly arrived, moonlit and cloudless. "I suppose we are in some danger? " She was not actually nervous about the wild beast, but she had a morbid dread of performing an atom more service than she had been paid for. "Nonsense," said Mrs. "If it's an old tiger I think you ought to get it cheaper. Online fundraising donations and ideas - JustGiving.

Related:  consciousness   -  The problems with philosophy   -  Action for Happiness   -  World-Mysteries.com   -  Because Every Country Is The Best At Something   -  Education   -  Enterprise