Talking About Sex and Consent Doesn’t Have to Be Scary (Plus it’s Real Important) Consent: it’s not just about sex. 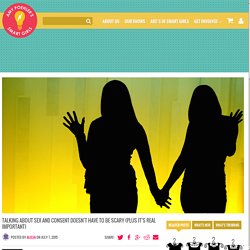 I mean sure, sex definitely involves consent — “yes” means “yes” and “no” means “no” — but not all consent involves sex. It’s sort of like that whole “not all squares are rectangles but all rectangles are square” rule. “Ahh! Quick quick close the tab on your browser,” some of you might be thinking at the arrival of the dreaded s-e-x word. “Don’t want the parents to see and/or freak out!” Because the more we talk openly and frankly about establishing boundaries in relationships of all kinds, the better we’ll all be when it comes to the sexy stuff, which is — spoiler alert — a very important thing for teens to learn.

It’s all about an honest, empathetic understanding of yourself, your wants, and those of the person with whom you may come into physical contact. Sex and consent can be scary for adults to talk about with kids (which, we know, is totally lame, right?). These College Students Are Dishing Out the Sex Talk Nobody Else Will. Wouldn't it be nice to go back and warn your younger self about the things you wish you knew about sex? 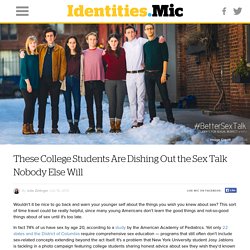 This sort of time travel could be really helpful, since many young Americans don't learn the good things and not-so-good things about of sex until it's too late. In fact 74% of us have sex by age 20, according to a study by the American Academy of Pediatrics. Yet only 22 states and the District of Columbia require comprehensive sex education — programs that still often don't include sex-related concepts extending beyond the act itself. It's a problem that New York University student Josy Jablons is tackling in a photo campaign featuring college students sharing honest advice about sex they wish they'd known in high school, called #BetterSexTalk. "I entered college with no understanding of sexual coercion, with no ability to recognize an unsafe relationship," Jablons of Students for Sexual Respect at NYU told the Huffington Post on Tuesday.

Why American teenagers are having much less sex. Teens appear to be waiting longer. 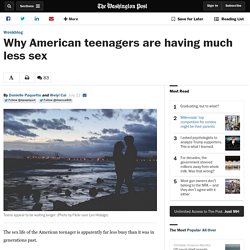 (Photo by Flickr user Leo Hidalgo) The sex life of the American teenager is apparently far less busy than it was in generations past. Less than half of teens older than 14 said they’ve had intercourse, a sharp drop from rates in the '80s, a new CDC study found. The majority of those who do choose to become sexually active are using some form of protection. And, in the last decade, the popularity of the so-called "morning-after pill" among girls has more than doubled. Teen births, meanwhile, have plummeted about 57 percent over the last 30 years. Researchers surveyed roughly 2,000 boys and girls, 15 to 19. The share of teen girls who reported they've had sex at least once dropped from 51 percent in 1988 to 44 percent in 2013, they found. Crotchety adults may joke: Maybe they’re too busy messing with their iPhones. That’s actually a decent theory, said Dr. “They’re looking on the web,” Bokor said.

Sex Ed Vs. Abstinence-Only Education. Here Are the Worst Myths About STIs According to the Women Who Have Them. When Jenelle Marie Davis, founder of the STD Project, learned she had herpes at 16 years old, she faced a "massive amount of peer-related shame and slut-shaming," she told Mic. 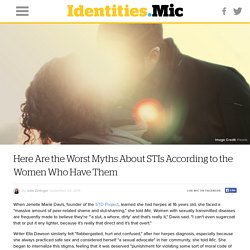 Women with sexually transmitted diseases are frequently made to believe they're "'a slut, a whore, dirty' and that's really it," Davis said. "I can't even sugarcoat that or put it any lighter, because it's really that direct and it's that overt. " Writer Ella Dawson similarly felt "flabbergasted, hurt and confused," after her herpes diagnosis, especially because she always practiced safe sex and considered herself "a sexual advocate" in her community, she told Mic. She began to internalize this stigma, feeling that it was deserved "punishment for violating some sort of moral code of the women who step out of whatever role we're expected to have. " It's a widespread experience, OB-GYN Dr. STDs are pretty common. "For most American youth, sexuality education is not great," she said. STDs aren't related to promiscuity. A Girl Gets Her Period And Is Banished To The Shed: #15Girls : Goats and Soda.

Kamala in front of her menstruation shed. 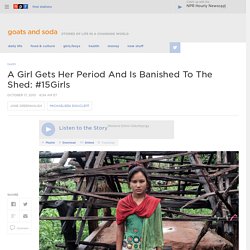