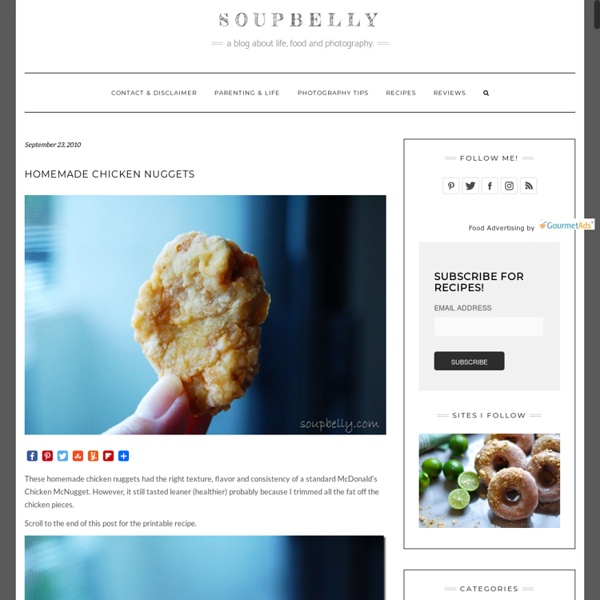 These homemade chicken nuggets had the right texture, flavor and consistency of a standard McDonald’s Chicken McNugget. However, it still tasted leaner (healthier) probably because I trimmed all the fat off the chicken pieces. I used a mixture of chicken breast meat and thigh meat, hoping the thigh meat would add some extra richness, flavor and moistness after frying. I remember back in the old days, McDonald’s used to only use dark meat, that’s when I liked them the most. You can use all dark meat if you wish, if you do, let me know how they turn out. It was easier than I thought it would be. Homemade Chicken Nuggets (approx. 30 nuggets) adapted from For The Love Of Food Ingredients: 2 lbs. Directions: 1) Heat oil in a heavy-duty skillet (like a cast iron skillet) on medium-high heat while preparing the chicken nuggets – it should be ready to work with once half of your nuggets are ready to go in. 2) Cube chicken and place in a food processor. Cube chicken and place in a food processor.

Oh My… Basil Chicken Happy Monday! What a weekend… full throttle. What did you think of the big game? I have a recipe to share with you today that I am pretty positive will knock your socks off and make you tongue tingle. Petite Lasagnas « Can You Stay for Dinner? recipe slightly adapted from Hungry Girl (makes 12) 12 oz raw ground turkey ¼ tsp salt, divided ¼ tsp pepper 1 cup chopped onion www.idealistrevolution We all cook and we all eat food. So why not make both of those easier? Don't let your snacks get the best of you. These ideas are simply brilliant. Stuffed Baguette Stuffed Baguette A hollowed baguette obviously makes a perfect shell for any filling you are in the mood for. And once stuffed and properly chilled, it becomes a neat appetizer.

recipe: buffalo chicken ring I love all things made with Frank’s Red Hot (or any hot sauce, really. But especially Frank’s Red Hot) I also love cheese. And crescent rolls. And ranch dressing. So this recipe? Chicken Nuggets // 33flavors This recipe caught my eye because it promised to taste just like Chick-fil-a nuggets. I made them for a family party and they were such a hit that my brother asked me to make them for my niece’s birthday party along with these pretzel bites. I still need a bit more practice with the pretzels, especially now that I’ve been delegated to make them for Oktoberfest. The nuggets are great though, especially with the honey mustard dressing. This recipe makes enough for a small crowd, but if you don’t have a small crowd leftovers can be frozen for up to a month. Chicken Nuggets with Honey Mustard Dressing

The Finger Test to Check the Doneness of Meat Print Photography Credit: Elise Bauer There are two basic methods to test for how done your meat is while you are cooking it—use a meat thermometer, or press on the meat with your fingertips. The problem with the meat thermometer approach is that when you poke a hole into the meat with a thermometer, it can let juices escape, juices that you would rather have stay in the meat. For this reason, most experienced cooks rely on a “finger test” method, especially on steaks (whole roasts are better tested with a thermometer).

bunsinmyoven I had a feast last night. A Mexican feast. Or maybe we can call it a fiesta? Kaytucky Chicken I have a really fun recipe for you! And easy, too. It’s hardly any work; the oven does the work for you, but it’s a really fun and tasty way to serve chicken for a change. Serve with an Avocado & Fennel Salad, lots of skillet baked potatoes and a little Green Peppercorn Sauce, but that’s mainly because I’m seriously addicted to how the sauce tastes on potatoes. This was absolutely delicious! Crusty Bread Recipe There’s just something about the smell of fresh baked crusty bread that makes you feel at home. If you like fresh baked bread but don’t like all the elbow grease that goes into it then keep reading. Bread makers were all the rage a few years ago and took a lot of the work out of fresh homemade bread. But what if I told you you could get the best homemade crusty bread ever without needing any gadgets, machines or even kneading the dough? That’s correct, NO KNEADING!

Stuffed Shells with Sausage and Spinach Recipe After taking the photo for our sausage stuffed shells recipe, I scrambled into the kitchen to grab plates, knifes, forks and napkins — you know, like any normal person would do before sitting down to have a nice meal with their husband. Just as I was leaving the kitchen, I realized something. I left the shells with Adam. Alone. How he did it, I’m not sure, but in the time it took me to go to the kitchen, grab our supplies and get back to him, he had finished at least half of the shells. Being someone who likes to look on the bright side of life, that made me think the recipe was a success and as Adam mentioned to me just after his last stuffed shell, hey, maybe we can say these are finger food!

Big Red Kitchen: Cinnamon Roll Pancakes The original and unique Cinnamon Roll Pancake recipe created by Robin Sue! My little Deven loves pancakes and wants me to make them all the time, but I don’t often enough. Late last night my friend had spotted this Cinnamon Bun Pancake Recipe from the blogisphere and posted it on her Facebook status suggesting for her daughter to make them. Wow, Cinnamon Bun Pancakes, that would be a winner in my house too. So I went to bed with pancakes dancing in my head. I dreamed up ways to make this pancake recipe look and taste more like a cinnamon roll.