Your Mind & Body Are Not Separate. This Chart Explains It All 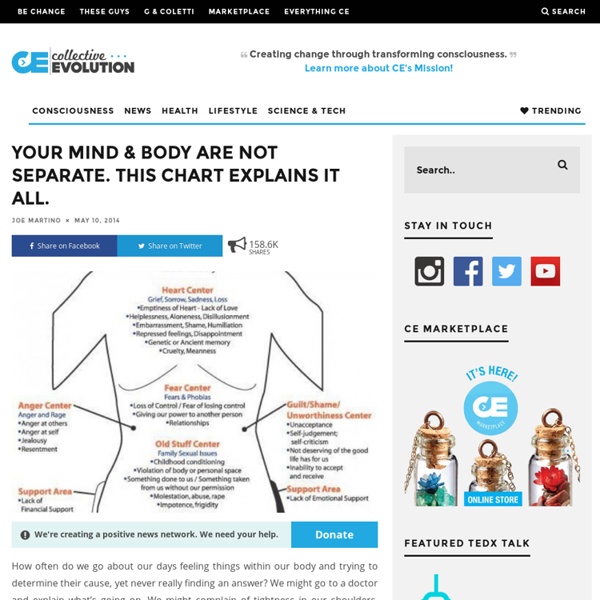 How often do we go about our days feeling things within our body and trying to determine their cause, yet never really finding an answer? We might go to a doctor and explain what’s going on. We might complain of tightness in our shoulders, pain in our knees, or discomfort in our abdomen. There’s no doubt that sometimes these problems are simply the result of having eaten the wrong thing, or moved the wrong way, but it is also important to consider our state of mind and our emotions, and how these translate into our physicality. We are energy beings, this isn’t some new-age spiritual concept. Our body has electricity that runs through it and it flows based on the cleanliness of the paths in which it travels. The illustration below is a general depiction of how our experiences, emotions, or beliefs can get energetically stored within the body. Next time you have a pain somewhere, notice tight shoulders, etc., take a moment and see if any of these can trigger some internal reflection.

Nerve Structures of the Spine Nerves control the body’s functions including the vital organs, sensation, and movement. The nervous system receives information and initiates an appropriate response. It is affected by internal and external factors (ie, stimulus). Nerves follow tracts and cross over junctions called synapses. A YouTube Video Is Doctor's Secret Weapon Against Back Pain Katherine Streeter for NPR A woman in her late 20s came to see me recently because her back hurt. She works at a child care center in town where she picks up babies and small children all day long. She felt a twinge in her lower back when hoisting a fussy kid. The pain was bad enough that she went home from work early and was laid out on the couch until she came to see me the next day. In my office she told me she had "done some damage" to her back.

The Truth About Coconut Oil: 9 Facts You Need To Know Coconut oil is one of the few foods that can actually be classified as a superfood. There is such a hype surrounding the product that it really makes you wonder what the sudden ubiquitousness of this tropical plant is all about. It contains a unique combination of fatty acids with powerful medicinal properties Coconut oil contains what is known as medium chain fatty triglycerides, which are fatty acids of a medium length. Most are considered to be long-chain in fatty acids, but coconut oil is metabolized differently. They go from the liver to the digestive tract, where they are then used as a quick source of energy.

Looking At Tears Under A Microscope Reveals A Shocking Fact. Share on Facebook One day Rose-Lynn Fisher wondered if her tears of grief would look different from her tears of joy, so she began to explore them up close under a microscope. She studied 100 different tears and found that basal tears (the ones that our body produces to lubricate our eyes) are drastically different from the tears that happen when we are chopping onions. The tears that come about from hard laughter aren’t even close to the tears of sorrow. 100 Very Cool Facts About The Human Body The Brain The human brain is the most complex and least understood part of the human anatomy. There may be a lot we don’t know, but here are a few interesting facts that we’ve got covered. Nerve impulses to and from the brain travel as fast as 170 miles per hour. Ever wonder how you can react so fast to things around you or why that stubbed toe hurts right away? It’s due to the super-speedy movement of nerve impulses from your brain to the rest of your body and vice versa, bringing reactions at the speed of a high powered luxury sports car.The brain operates on the same amount of power as 10-watt light bulb.

Scientists Discover Children’s Cells Living in Mothers’ Brains The link between a mother and child is profound, and new research suggests a physical connection even deeper than anyone thought. The profound psychological and physical bonds shared by the mother and her child begin during gestation when the mother is everything for the developing fetus, supplying warmth and sustenance, while her heartbeat provides a soothing constant rhythm. The physical connection between mother and fetus is provided by the placenta, an organ, built of cells from both the mother and fetus, which serves as a conduit for the exchange of nutrients, gasses, and wastes. Cells may migrate through the placenta between the mother and the fetus, taking up residence in many organs of the body including the lung, thyroid, muscle, liver, heart, kidney and skin. These may have a broad range of impacts, from tissue repair and cancer prevention to sparking immune disorders.

Amazing Herb That Kills Cancer Cells in 48 Hours – 100 Times More Effective Than Chemotherapy Dandelion tea affects cancer cells, in a way that it disintegrates them within 48 hours, and thus does not allow the healthy cells to be attacked. This herb is neglected a lot, but it has a number of medicinal properties, and all you have to do is to pick it on clean fields, away from traffic. While our grandmothers knew that the dandelion syrup contains many medicinal substances, today we know that the root of the dandelion can help patients suffering from cancer. Scientists have discovered that the root of this herb “works” better than chemotherapy because it kills only the cancer cells. The University of Windsor in Canada conducted research at the Department of Chemistry and Biochemistry, and the results had given new hope to patients with cancer. It was discovered that the root of the dandelion effectively “kills” the cells affected by cancer, without adversely affecting other cells in the body.

Selfish traits not favoured by evolution, study shows 2 August 2013Last updated at 06:29 ET By Melissa Hogenboom Science reporter, BBC News Humans and animals could not evolve in a co-operative environment by being selfish, scientists say Evolution does not favour selfish people, according to new research. This challenges a previous theory which suggested it was preferable to put yourself first. Instead, it pays to be co-operative, shown in a model of "the prisoner's dilemma", a scenario of game theory - the study of strategic decision-making. Published in Nature Communications, the team says their work shows that exhibiting only selfish traits would have made us become extinct.

How To See An Aura: Learn To See The Hunan Aura Auras are an energy field that is present around every living creature and some inanimate objects. The aura is generated by the 7 major chakras and the 114 minor chakras in the human body. What Color Is Your Aura And What Does It Mean? The Healing Power of Cat Purrs Those crazy cat ladies might be onto something. According to today’s infographic, our feline friends provide us with more than just emotional support. House cats may actually be contributing to our physical well-being. When a cat purrs within a range of 20-140 Hertz, nearby humans may be therapeutically benefiting from these vibrations. Purring has been linked to lowering stress, decreasing symptoms of Dyspnoea, lessening the chances of having a heart attack, and even strengthening bones.

The 7 Traits of a Free Thinker We all have a certain degree of admiration for those forward-thinkers who were ahead of their time or for those free-spirited individuals who had the courage, the will and the foresight to speak out their minds despite risking being labelled as non-conformists and cast to the outer fringes of society. Well, truth be told, that is never a real threat for free thinkers. Actually, that is where they belong and makes them what they are. Free-thinkers breathe and thrive at the margins of society where structure and chaos cross at the borderline. If you want to be a free thinker, embrace chaos, novelty, disruptive change and non-conformity. Free-thinkers live on the brink of social breakdown.

Activity levels in mums and children 'directly linked' 24 March 2014Last updated at 02:02 ET The more active a mother is, the more physically active her child will be, suggests a UK study of 500 mums and four-year-olds. But many mothers' exercise levels fell way below recommended levels, it said. Researchers from Cambridge and Southampton universities used heart-rate monitors to measure activity levels over seven days. The study, published in Pediatrics, said policies to improve children's health should be aimed at mothers. Updated map of the human brain hailed as a scientific tour de force When the German neurologist Korbinian Brodmann first sliced and mapped the human brain more than a century ago he identified 50 distinct regions in the crinkly surface called the cerebral cortex that governs much of what makes us human. Now researchers have updated the 100-year-old map in a scientific tour de force which reveals that the human brain has at least 180 different regions that are important for language, perception, consciousness, thought, attention and sensation. The landmark achievement hands neuroscientists their most comprehensive map of the cortex so far, one that is expected to supersede Brodmann’s as the standard researchers use to talk about the various areas of the brain. Scientists at Washington University in St Louis created the map by combining highly-detailed MRI scans from 210 healthy young adults who had agreed to take part in the Human Connectome Project, a massive effort that aims to understand how neurons in the brain are connected.