Resilience: The Biology Of Stress And The Science Of Hope (trailer) Humans Really Are Made of Stardust, and a New Study Proves It. For decades, science popularizers have said humans are made of stardust, and now, a new survey of 150,000 stars shows just how true the old cliché is: Humans and their galaxy have about 97 percent of the same kind of atoms, and the elements of life appear to be more prevalent toward the galaxy's center, the research found. 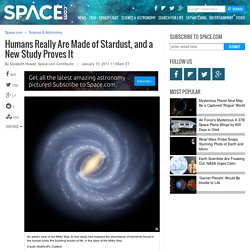 The crucial elements for life on Earth, often called the building blocks of life, can be abbreviated as CHNOPS: carbon, hydrogen, nitrogen, oxygen, phosphorus and sulfur. 9 Months Of Pregnancy In 4 Minutes. Second Brain Found in Heart Neurons - Trust your Gut Feelings. The idea of transplanted cellular memory emerged as early as 1920 in the film "Les Mains d'Orleac" written by science fiction writer Maurice Renard. 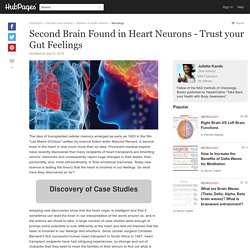 A second brain in the heart is now much more than an idea. Prominent medical experts have recently discovered that many recipients of heart transplants are inheriting donors' memories and consequently report huge changes in their tastes, their personality, and, most extraordinarily, in their emotional memories. Today new science is testing the theory that the heart is involved in our feelings. They'll Have to Rewrite the Textbooks. Updated map of the human brain hailed as a scientific tour de force. When the German neurologist Korbinian Brodmann first sliced and mapped the human brain more than a century ago he identified 50 distinct regions in the crinkly surface called the cerebral cortex that governs much of what makes us human. 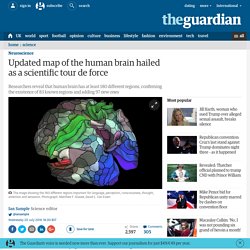 Now researchers have updated the 100-year-old map in a scientific tour de force which reveals that the human brain has at least 180 different regions that are important for language, perception, consciousness, thought, attention and sensation. The landmark achievement hands neuroscientists their most comprehensive map of the cortex so far, one that is expected to supersede Brodmann’s as the standard researchers use to talk about the various areas of the brain. Scientists at Washington University in St Louis created the map by combining highly-detailed MRI scans from 210 healthy young adults who had agreed to take part in the Human Connectome Project, a massive effort that aims to understand how neurons in the brain are connected. This Video Dispels Every "Nature VS Nurture" Myth You've Ever Heard. The Implications are Profound. Human: Explore the Body in 3D!

How To See An Aura: Learn To See The Hunan Aura. Auras are an energy field that is present around every living creature and some inanimate objects. 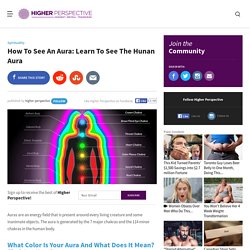 The Human Genome Is Far More Complex Than Scientists Thought. 100 Very Cool Facts About The Human Body. The Brain The human brain is the most complex and least understood part of the human anatomy. 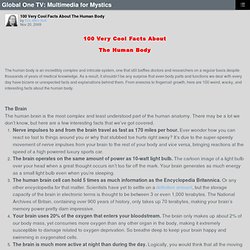 There may be a lot we don’t know, but here are a few interesting facts that we’ve got covered. Nerve impulses to and from the brain travel as fast as 170 miles per hour. Ever wonder how you can react so fast to things around you or why that stubbed toe hurts right away? It’s due to the super-speedy movement of nerve impulses from your brain to the rest of your body and vice versa, bringing reactions at the speed of a high powered luxury sports car.The brain operates on the same amount of power as 10-watt light bulb.

Hair and Nails. Nerve Structures of the Spine. Nerves control the body’s functions including the vital organs, sensation, and movement. 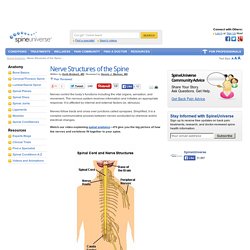 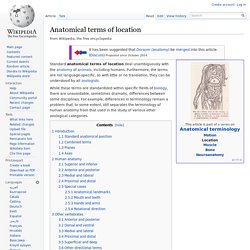 Furthermore, the terms are not language-specific, so with little or no translation, they can be understood by all zoologists. While these terms are standardized within specific fields of biology, there are unavoidable, sometimes dramatic, differences between some disciplines. For example, differences in terminology remain a problem that, to some extent, still separates the terminology of human anatomy from that used in the study of various other zoological categories. Introduction[edit] Anatomical terms of motion. In general, motion is classified according to the anatomical plane it occurs in. 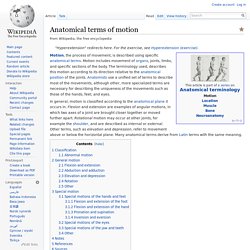 Flexion and extension are examples of angular motions, in which two axes of a joint are brought closer together or moved further apart. Rotational motion may occur at other joints, for example the shoulder, and are described as internal or external. Other terms, such as elevation and depression, refer to movement above or below the horizontal plane. Human Anatomy: Learn All About the Human Body at InnerBody.com. 3000 Years Of Women’s Beauty Standards In A 3 Minute Video. Beauty is indeed in the eye of the beholder, but our idea of beauty over the past few decades has most definitely been programmed into us. 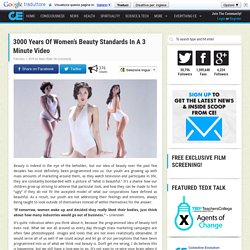 Our youth are growing up with mass amounts of marketing around them, as they watch television and participate in life, they are constantly bombarded with a picture of “what is beautiful.” It’s a shame how our children grow up striving to achieve that particular look, and how they can be made to feel “ugly” if they do not fit the accepted model of what our corporations have defined as beautiful. As a result, our youth are not addressing their feelings and emotions, always being taught to look outside of themselves instead of within themselves for the answer. “If tomorrow, women woke up and decided they really liked their bodies, just think about how many industries would go out of business.” – Unknown It’s quite ridiculous when you think about it, because the programmed idea of beauty isn’t even real. Ny studie: Kvinnor med stor rumpa får smartare barn.

Samma fråga ställdes till vuxna och barn om deras kroppar – barnens svar är klockrena. Eyes: The Windows to Your Health. Your Tears Hold Emotions at the Microscopic Level. Remember back when we talked about water? 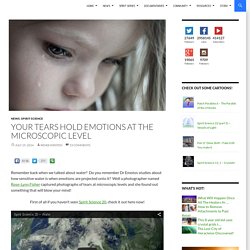 Do you remember Dr Emotos studies about how sensitive water is when emotions are projected onto it? Awesome Video Shows Body Doing Yoga In An X-ray Machine. Ismail Cihangir Akıncı. What I Learned from 50 Naked People - The Effects Of Negative Emotions On Our Health.

Humans experience an array of emotions, anything from happiness, to sadness to extreme joy and depression. Each one of these emotions creates a different feeling within the body. After all, our body releases different chemicals when we experience various things that make us happy and each chemical works to create a different environment within the body. For example if your brain releases serotonin, dopamine or oxytocin, you will feel good and happy. Conversely, if your body releases cortisol while you are stressed, you will have an entirely different feeling associated more with the body kicking into survival mode. What about when we are thinking negative thoughts all the time?

Positive vs. Is there duality in our world? Cut The Perceptions As Much As Possible After thinking about it for a moment you might realize that there are in fact no positive or negative experiences other than what we define as such. Mind Body Connection Source : Scientific Proof Thoughts & Intentions Can Alter The Physical World Around Us. Water, Consciousness & Intent: Dr. Masaru Emoto. Reprogramming Your Junk DNA. Every now and then I come across a stunning example of pseudoscience, an exemplar, almost raising pseudoscience to an art form.

Some pieces of scientific nonsense read almost like poetry. Such examples make me wonder what is going on in the mind of the pseudoscientist – to me, the most fascinating question. One example I recently came across is the idea that we can reprogram our DNA through words alone. The Healing Power of Cat Purrs. Those crazy cat ladies might be onto something. According to today’s infographic, our feline friends provide us with more than just emotional support. House cats may actually be contributing to our physical well-being.

When a cat purrs within a range of 20-140 Hertz, nearby humans may be therapeutically benefiting from these vibrations. Purring has been linked to lowering stress, decreasing symptoms of Dyspnoea, lessening the chances of having a heart attack, and even strengthening bones. Science Theory Shows We Can Reprogram Our DNA to Heal Ourselves with Vibration. As though to confirm the hunch many of us had that our ‘junk’ DNA was anything but disposable, researchers from the Gene and Stem Cell Therapy Program at Sydney’s Centenary Institute have proven that 97 percent of human DNA programs or encodes proteins in our bodies. One of the researchers involved in this study said, “this discovery, involving what was previously referred to as “junk,” opens up a new level of gene expression control . . .”

This also means there are multiple modalities that mainstream science has yet to give a nod to, which just might re-train or reprogram our DNA — even cells which have become cancerous or are mutilated by the onslaught of toxins in our environment and negative emotional baggage which has been proven to have an undesirable impact on health. Many people have compared human DNA to the Internet. Scientists Discover Children’s Cells Living in Mothers’ Brains. The link between a mother and child is profound, and new research suggests a physical connection even deeper than anyone thought. A YouTube Video Is Doctor's Secret Weapon Against Back Pain. Your Mind & Body Are Not Separate. This Chart Explains It All. Looking At Tears Under A Microscope Reveals A Shocking Fact.

BioDigital Human: Explore the Body in 3D! The Average Women Faces In Different Countries. Fake it ’til you become it: Amy Cuddy’s power poses… visualized. Curious study calculates the “average” female face for each country. Like us on FB: In a recent study, researchers from the Scottish University blended and aligned thousands of photos of women from 40 different countries to calculate the “average” face for each nation. My 'Naked' Truth  Introducing Body Movement And Space Dance Elements To Young Students.