What Does Your Handwriting Say About You? 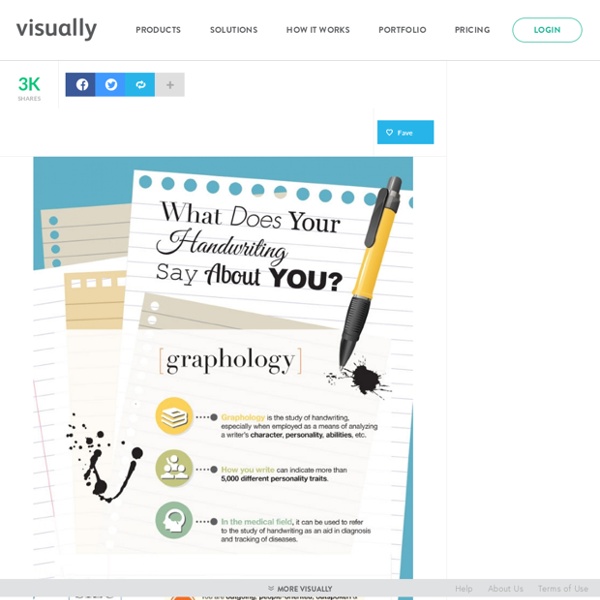 What Does Your Handwriting Say About You? graphology Graphology is the study of handwriting, especially when employed as a means of analyzing a writer's character, personality, abilities, etc. How you write can indicate more than 5,000 different personality traits. In the medical field, it can be used to refer to the study of handwriting as an aid in diagnosis and tracking diseases. size large letters You are out-going, people oriented, outspoken & love attention. small letters You are shy or withdrawn, studious, concentrated and meticulous. average You are well-adjusted and adaptable spacing between words wide spacing You enjoy your freedom and don't like to be overwhelmed or crowded narrow spacing You can't stand to be alone. slanting No Slant You don't let your emotions get the best of you. Slants to the right You are open to new experiences & enjoy meeting new people. Slants to the left You tend to keep to yourself and generally like to work behind the scenes. shape of the letters Rounded letters Open

Create a Create a Magical Fantasy Image Effect in Photoshop In this tutorial, you will learn how to create create a magical fantasy picture effect in Photoshop. Program - Photoshop CS5 Assets - The following assets were used during the production of this tutorial: When a Child Dies, a Therapist Warns, the Grief of Brothers and Sisters May Leave Lasting Scars : People.com Mobile "There was a time when people didn't believe that children mourn," says Chicago psychotherapist Jerry Rothman. "And until recently many psychologists tended to downplay the importance of siblings to one another." Unfortunately, Rothman knew better. Best Movies of 2013 May we stipulate that 2013 has been a flat-out, stone-cold, hands-down spectacular year in movies? Which means that many of us are frustrated. After all, the average filmgoer only sees about six films a year. This is being written at a time when there are at least 10 must-see movies in area theaters, not to mention titles that are stacking up in our on-demand queues like backed-up shuttle flights circling Reagan National. And guess what: There are more on the way. Even with names like Soderbergh, Spielberg and Lucas decrying the current state of cinema in recent months, it’s still easy to choose 10 movies of exceptional ambition, vision and artistic sensitivity – so easy that we decided to expand the list to a lucky 21.

How to become a Successful Writer: Seth Godin in Conversation Are you ready for success?Art is the unique work of a human being, work that touches another. – Seth Godin, The Icarus Deception This is part 2 of Seth Godin in conversation with Mary Jaksch, the Chief Editor of Write to Done. Seth: If you’ve accepted that the rules of the game are that you are not willing to write unless everyone likes what you write, then you’ve just announced that you’re an amateur, not a professional, and that you’re probably doomed. Whereas the professional writer says, ‘It is almost certain that most of what I write will not resonate with most people who read it, but over time, I will gain an audience who trusts me to, at the very least, be interesting.’ Mary: I suppose that’s the real advantage of the internet as opposed to the writing industry: you can always find that small group of people who will be interested in what you write.

Nature Knows: Amazing macro-photography of individual snowflakes [10 Pictures] Photographer Alexey Kljatov takes incredible close-up photos of snowflakes in his backyard in Moscow. "I capture snowflakes on the open balcony of my house, mostly on glass surface, lighted by an LED flashlight from the opposite side of the glass, and sometimes in natural light, using dark woolen fabrics as background." Source: Happy New Year Happy New Year / 30 December, 2009 [click for previous image: let it snow #3] Happy New Year / 30 December, 2009 [click for next image: ringing in the new year] Title • Happy New Year I've spent the last couple of days wondering what to post to close out the year and then came across this entry on momentaryawe.com (run by my good friend Catalin Marin): his twelve favourite shots from 2009, one from each month. So, with credit to Catalin for the idea, here are my twelve favourites for the preceding year.

Top 10 Thinking Traps Exposed Our minds set up many traps for us. Unless we’re aware of them, these traps can seriously hinder our ability to think rationally, leading us to bad reasoning and making stupid decisions. Features of our minds that are meant to help us may, eventually, get us into trouble. Here are the first 5 of the most harmful of these traps and how to avoid each one of them. My collection of funny emails from my inbox. Subject: 5 MINUTE MANAGEMENT COURSE Lesson 1: A man is getting into the shower just as his wife is finishing up her shower, when the doorbell rings. The wife quickly wraps herself in a towel and runs downstairs. When she opens the door, there stands Bob, the next-door neighbor.

How to Become a Writing Rockstar: A Simple Guide Do you want to become a writing rockstar? Have you ever felt like you could be more? I’m talking about that feeling deep down that nudges you forward with your writing. Improve Your Google Search Skills [Infographic] Don’t limit yourself to just plugging in simple search terms to Google; check out this infographic and learn a search string search or two. You don’t need to limit yourself to searching just for simple strings; Google supports all manner of handy search tricks. If you want to search just HowToGeek.com’s archive of XBMC articles, for example, you can plug in site:howtogeek.com XBMC to search our site. Get More Out of Google [HackCollege via Mashable] Jason Fitzpatrick is a warranty-voiding DIYer who spends his days cracking opening cases and wrestling with code so you don't have to.

The State of the Brain and Diagnoses of Schizophrenia and Bipolar Disorder A new report reckons this is the most exciting and unsettling period in the history of psychiatry since Freud started talking about sex in public. On the one hand, the American Psychiatric Association has introduced the fifth iteration of the psychiatric diagnostic manual, DSM-V, representing the current best effort of the brightest clinical minds in psychiatry to categorize the enormously complex pattern of human emotional, cognitive, and behavioral problems. On the other hand, in new and profound ways, neuroscience and genetics research in psychiatry are yielding insights that challenge the traditional diagnostic schema that have long been at the core of the field. "Our current diagnostic system, DSM-V represents a very reasonable attempt to classify patients by their symptoms.