The Magic of Doing One Thing at a Time - Tony Schwartz 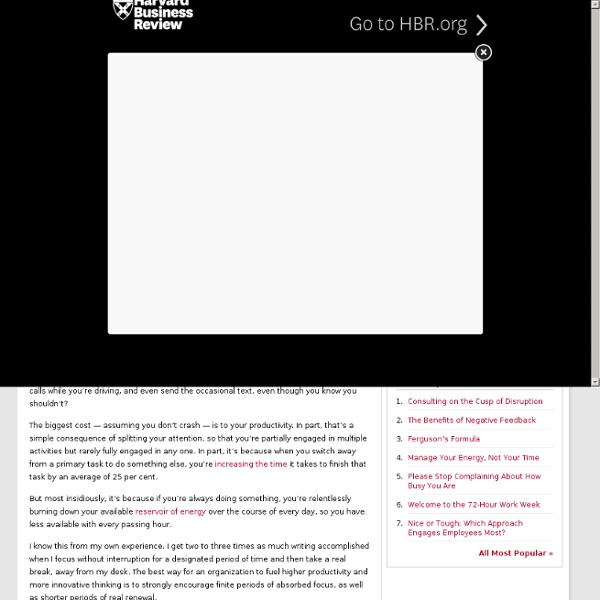 by Tony Schwartz | 8:53 AM March 14, 2012 Why is it that between 25% and 50% of people report feeling overwhelmed or burned out at work? It’s not just the number of hours we’re working, but also the fact that we spend too many continuous hours juggling too many things at the same time. What we’ve lost, above all, are stopping points, finish lines and boundaries. Technology has blurred them beyond recognition. Wherever we go, our work follows us, on our digital devices, ever insistent and intrusive. Tell the truth: Do you answer email during conference calls (and sometimes even during calls with one other person)? The biggest cost — assuming you don’t crash — is to your productivity. But most insidiously, it’s because if you’re always doing something, you’re relentlessly burning down your available reservoir of energy over the course of every day, so you have less available with every passing hour. I know this from my own experience. 1. 2. 3. 1. 2. 3.

The Super Simple Phone Hack That Will Transform Your Productivity A while back, my cofounder Leo gave me an interesting suggestion: He said I should try disabling all notifications on my iPhone. I find this suggestion especially interesting because it is one that goes against the normal phone setup. It’s so usual to stick to how things are, and with iPhone apps the easiest thing to do is to “allow” all those notifications. It seems almost odd to even consider doing things any other way. I chose to go along with Leo’s suggestion, although I was admittedly quite skeptical that it would change much. I imagined that I had pretty good willpower, and that I am fairly productive already.

Productivity Hacks – Making Time by Shaving Time If there’s one thing I learned in 2011, it was how to be ultra-productive. I’ve discussed productivity in detail before here on SPI, namely in podcast session #12: Mind Hacks, Physical Hacks and Work Hacks for Better Productivity and Getting Things Done (which was actually posted almost exactly 1 year ago) however, during this past year there was one major factor that contributed to my going beyond just being productive, and becoming ultra-productive: My son. With a kid, especially one who was in his 2nd year of life (from age 1 to 2), the time I had available to work dramatically decreased, as did the time I wanted to spend on work. My son has become the center of my life – in more ways than you can imagine unless you have a child of your own. Obvious productivity tips come into play, of course, such as:

7 Simple Steps to Extreme Personal Productivity Last Updated Oct 18, 2011 11:34 AM EDT Increasing personal productivity is big business: Stephen Covey, David Allen, Tony Robbins, 43folders... those and countless others have combined to turn improving individual productivity into a massive industry. Forget them. Is Your Smartphone Making You Less Productive? - Ndubuisi Ekekwe by Ndubuisi Ekekwe | 2:09 PM April 6, 2012 Mobile devices have exacerbated an always-on work culture where employees work anytime, anywhere. They’ve contributed to the blurred distinction between when you’re “on the clock” and when you’re not. With New Tool, Visual.ly Wants To Replace PowerPoint With Infographics "Before PowerPoint, you had to go find a designer to create a custom presentation," says Stew Langille. "Even though everyone hates PowerPoint now, it was really helpful when it first came out." Now Langille’s startup, Visual.ly, is attempting to do for infographics what Microsoft did for presentations. Today, the company launched a new platform to allow virtually anyone to create data visualizations. By tapping into data APIs--from Facebook Insights, Twitter, Data.gov, and so forth--Visual.ly enables users to plug predetermined datasets into premade designs, offering a stable of templates and themes that will continue to grow thanks to the startup’s in-house team and community of roughly 4,000 freelance designers. "We hear a huge influx of people saying, 'How can I get someone to help me create an infographic or a dashboard or an interactive visualization?'"

Monotasking Is The New Multitasking We all know multitasking is inefficient. A classic 2007 study of Microsoft workers found that when they responded to email or instant messaging alerts, it took them, on average, nearly 10 minutes to deal with their inboxes or messages, and another 10-15 minutes to really get back into their original tasks. That means that a mere three distractions per hour can preclude you from getting anything else done. 20 Quick Tips For Better Time Management - Stepcase Lifehack Are you usually punctual or late? Do you finish things within the time you stipulate? Do you hand in your reports/work on time? Are you able to accomplish what you want to do before deadlines? Are you a good time manager?

The Biggest Time Saving Tip Of All Last Updated May 31, 2011 8:01 AM EDT Everyone seems to be busy these days. And so, we're all looking for some life hack that will free up time and make our lives run like well-oiled machines. In the year since my book, 168 Hours (out in paperback today), was published, I've been asked for my fair share of these tips. The Freelance Surge Is the Industrial Revolution of Our Time - Sara Horowitz - Business Welcome to the Gig Life. The boom in independent work is changing the way we think about jobs and careers. Does Washington get it? It's been called the Gig Economy, Freelance Nation, the Rise of the Creative Class, and the e-conomy, with the "e" standing for electronic, entrepreneurial, or perhaps eclectic.

Can Twitter Predict the Volume and Price of a Specific Stock? In a world where everyone’s opinion is publicly recorded, it should be theoretically possible to determine the most popular concept of the moment — be it a movie, a song, a feeling or even a stock. Certainly, we don’t have enough information at this point to record everyone’s fleeting thoughts, but Twitter is something that makes a good temporary approximation. And that’s what led University of California, Riverside professor Vagelis Hristidis to investigate whether Twitter sentiment could help predict the stock market.

How to Focus A Wandering Mind, by Wendy Hasenkamp New research reveals what happens in a wandering mind—and sheds light on the cognitive and emotional benefits of increased focus. We’ve all been there. You’re slouched in a meeting or a classroom, supposedly paying attention, but your mind has long since wandered off, churning out lists of all the things you need to do—or that you could be doing if only you weren’t stuck here… Suddenly you realize everyone is looking your way expectantly, waiting for an answer. But you’re staring blankly, grasping at straws to make a semi-coherent response. The curse of the wandering mind!

Christopher Donohue: Information in a multi dimensional and empowered way By Christopher DonohueIt is such an exhilarating time in which a significant number of the global collective now have access to an abundance of information via the web and social platforms. However, some suffer from information overload. Many also think that information can only reside in books, online text or in documents (Word, Excel, presentations, and databases). Overcoming Procrastination Just a Few Minutes at Time I was having difficulty starting a project. Something always seemed to be more important. Finally, I took just a few minutes to break the project into manageable steps. While I’ve not yet finished the project, I have begun. What ’s more, I have a sense of restlessness and urgency about completing the project. Actually, I was intentionally appling a principle from Richard Wiseman’s book 59 Seconds: Think a Little, Change a Lot.