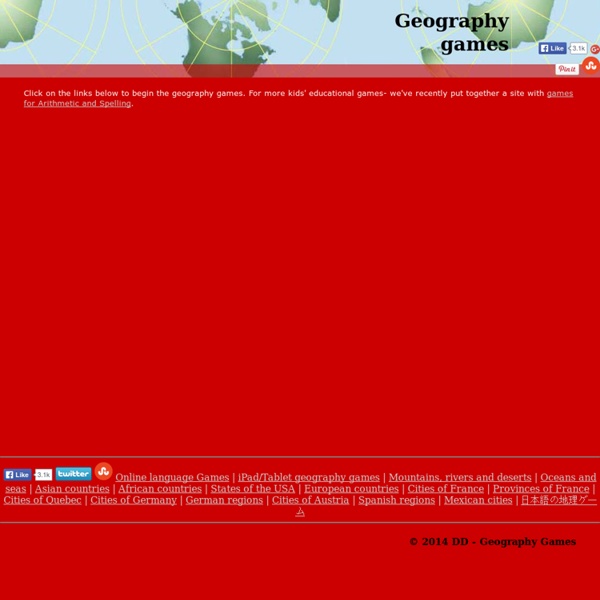 6 Sites To Get Kids Excited About Google Maps I can remember three distinct occasions in my life where I have been blown away by technology. I will save the first two for another day, but I will say that the amazing experience of walking the streets of New York, from my computer on the other side of the world in Australia is definitely one of them. That feeling of disbelief where you wonder if it is another April 1st prank… What, they actually drove a little car all around the city taking photos??? But they did… And they continue to do so. Google Maps started as a downloadable C++ program designed by two Danish brothers Lars and Jens Rasmussen. Here are six brilliant sites that use Google Maps to make fascinating, interesting, fun and thought provoking things happen. Google Sightseeing Google Sightseeing lets you see the sights of the world without leaving your chair. The Great Global Treasure Hunt MapCrunch MapCrunch is a highly addictive way to explore Google Streetview as well as spark an interest in geography around the globe.

18 interesting geographical facts Luca Oct 19,2013 1. According to Guinness Book of Records, the longest geographical name is “Taumatawhakatangihangak oauauotamateaturipukaka pikimaungahoronukupokaiwhe nua kitanatahu” . It has 85 letters and it’s the name of a hill in New Zealand. 2. 3. same name in Norway. 4. 5. 6. 7. 8. 9. 10. 11. 12. 13. 14. 15. 16. Map Maker Google Map Maker officially closed on March 31, 2017, and many of its features are being integrated into Google Maps. Since 2008, the Google Map Maker community has edited and moderated millions of features to improve the Google Maps experience. To make it easier for all Google Maps users to contribute changes to the map, we’ve started to graduate functionality from Map Maker to Google Maps on both desktop and mobile. Key editing features currently available in Google Maps include: We’ll continue to add new editing features within Google Maps on an ongoing basis. To keep contributing your local knowledge to Google Maps and engage with a passionate community of likeminded individuals, we invite you to join the Local Guides program where you can do things like: Earn points Unlock rewards for submitting edits and other information Get early access to new Google Map features.

Resource: World Geography Games With approximately 190 countries dotted across our vast planet, learning details on all country locations, flags and capital cities can be a challenge for most. Now a new website helps test your knowledge of locations of different countries, capital cities along with other geographical features of our planet. World Geography Games can help test knowledge of Countries, capitals and flags of all the nations of the world, as well as Continents, Earth, atmosphere, Oceans, Seas, Lakes, Rivers, Straits and Canals, Regions, Islands, Metropolitan Areas, Mountains, Volcanoes and Deserts. The site is well designed, and the games really do test you knowledge of the areas you are focusing on, with the information contained in the atmosphere and earth sections being particularly helpful. Click here to visit the site: World Geography Games.

20 Good Map Creation Tools for Students A couple of years ago I published a list of 21 online map creation tools. Since then some of those tools have gone offline and new tools have replaced them. Here's my updated list of online map creation tools for students and teachers. Wikia Maps is a map creation tool from Wikia. Odyssey.js is an open source map creation tool from CartoDB. Visits is an online tool for creating a location history timeline by using your Flickr images and Google Maps. National Geographic's Map Maker Interactive offers themes on which users can create custom map displays. ikiMap is a free service for creating custom maps online. Animaps is a service that was built for the purpose of allowing users to create animated Google Maps. Tripline is a service designed to enable anyone to record a trip they've taken or to plan a trip itinerary. Scribble Maps is a fun and useful application for drawing and typing on Google Maps. Mapfaire is a free tool for quickly creating maps that contain simple placemarks.