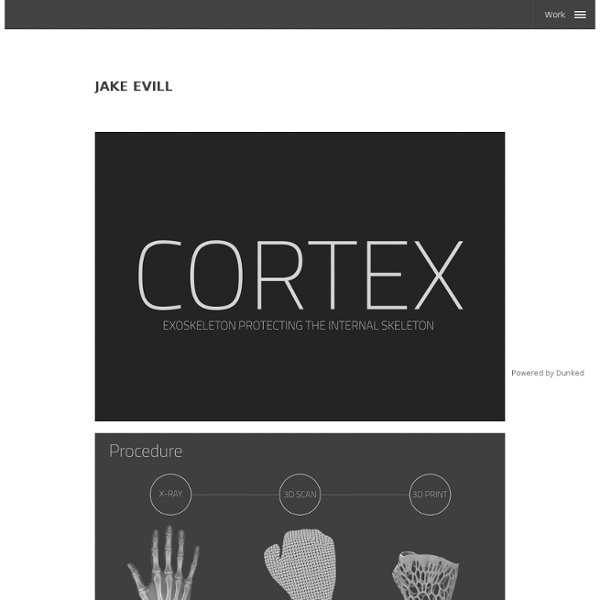 NeuroKnitting: Knitting a Personalized Scarf from Brainwave Activity NeuroKnitting [knitic.com] by Varvara Guljajeva, Mar Canet, and Sebastian Mealla consists of a collection of knitted garments that represent the wearer's affective and cognitive states while listening to Bach's Goldberg Variations' aria and its first 7 variations. First the EEG correlates of relaxation, engagement and cognitive load were recorded while people were listening to the musical piece. This information was then used by an open hardware knitting machine Knitic to create a bicolor pattern for knitting several scarves. The knitted garments thus visualize the listener's affective and cognitive states as a unique and personalized textile pattern.

Intelligent knife tested on cancer patients in London hospitals | Science An intelligent knife that knows when it is cutting through cancerous tissue is being tested in three London hospitals. Experts believe the wand-like device, the first of its kind in the world, will revolutionise cancer treatment by removing uncertainty from surgery. In an early study, the iKnife identified malignant tissue in cancer patients having operations with 100% accuracy. After more extensive trials it could be approved for general use in operating theatres within three years. Surgery is often the best hope of a cancer cure, yet even the best surgeons cannot be sure of removing every part of a tumour. In the case of breast cancer, more than 20% of the cancerous tissue may be left behind. The iKnife helps the surgeon by indicating exactly where the cancerous tissue is, and when it has all been removed. It could allow surgeons to perform riskier operations, and also has the ability to reveal the original site of a cancer that has spread.

THOMAS QUINN World's first lab-grown burger to be cooked and eaten 4 August 2013Last updated at 22:31 ET By Pallab Ghosh Science correspondent, BBC News Professor Mark Post of Maastricht University explains how he and his colleagues made the world's first lab-grown burger The world's first lab-grown burger is to be unveiled and eaten at a news conference in London on Monday. Scientists took cells from a cow and, at an institute in the Netherlands, turned them into strips of muscle which they combined to make a patty. Researchers say the technology could be a sustainable way of meeting what they say is a growing demand for meat. Critics say that eating less meat would be an easier way to tackle predicted food shortages. BBC News has been granted exclusive access to the laboratory where the meat was grown in a project costing £215,000. Prof Mark Post of Maastricht University, the scientist behind the burger, said: "Later today we are going to present the world's first hamburger made in a lab from cells. "That's just weird and unacceptable. “Start Quote

KENDiN YAP sitesi, Türkiye nin Kendin Yap Sitesi, kendin yap proje arşivi Face Reality As It Is: Anamorphic Typography by Thomas Quinn When viewed head on, what at first looks like typography on top of a simple photograph reveals itself to be well-executed anamorphic typography by Chicago designer Thomas Quinn. The illusion is created using a standard light projector that projects the intended design on an uneven surface which is then carefully painted. From every other angle the work looks skewed and almost illegible, but when you stand at just the right spot everything seems to pop into place. You can see many variations of anamorphism right here on Colossal, and don’t forget the absolute master of the art form, Felice Varini. (via this isn’t happiness)

4 Hilariously Dystopian Ways Science Is Reinventing Food As you read these very words, the world's top minds are cloistered away in their laboratories, busy concocting healthy new foodstuffs like real-life Willy Wonkas (who care more for nourishing the planet and less about psychologically torturing British children). But if the following delectables are the best that food science can whip up, we can expect our great-great-grandchildren to subsist on a steady diet of irradiated dirt smoothies and rusty Terminator widgets ... by choice. #4. As an alternative to resource-gobbling cows, researchers at Maastricht University in the Netherlands have developed a lab-grown hamburger woven out of 20,000 bovine muscle fibers. Reuters/David Parry/pool"The seasoning from my unwashed hands is on the house." But what would $300K worth of genetic manipulation mean for your next cookout? Reuters, Reuters/Toby MelvilleThese are suspiciously like the faces parents make when their kids make Father's/Mother's Day breakfast. #3. #2. #1. 3D-Printed Crap for Old Folks