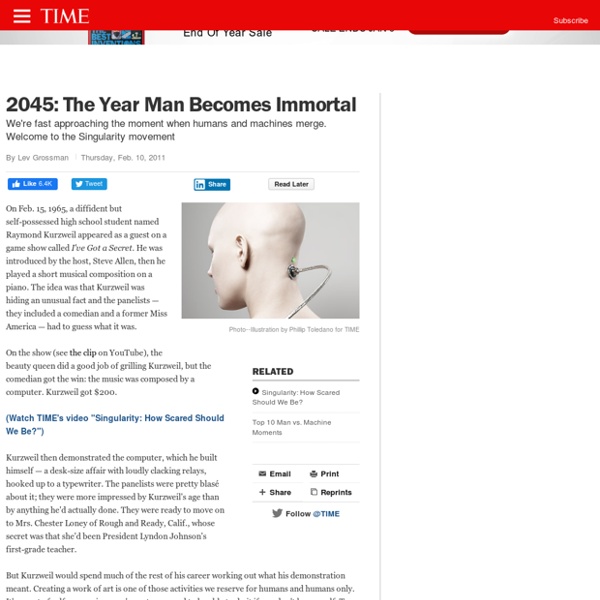 On Feb. 15, 1965, a diffident but self-possessed high school student named Raymond Kurzweil appeared as a guest on a game show called I've Got a Secret. He was introduced by the host, Steve Allen, then he played a short musical composition on a piano. The idea was that Kurzweil was hiding an unusual fact and the panelists — they included a comedian and a former Miss America — had to guess what it was. On the show (see the clip on YouTube), the beauty queen did a good job of grilling Kurzweil, but the comedian got the win: the music was composed by a computer. Kurzweil got $200. Kurzweil then demonstrated the computer, which he built himself — a desk-size affair with loudly clacking relays, hooked up to a typewriter. But Kurzweil would spend much of the rest of his career working out what his demonstration meant. That was Kurzweil's real secret, and back in 1965 nobody guessed it. Computers are getting faster. True? Probably.

3D Printed Body Parts Go Mainstream 3D printing technology has been around for two decades, but the price has come down in recent years and more people have been able to make use of it. Consequently, we've started to be able to really tap into its vast potential. 3D printed products are being spewed out left, right and center; from the building blocks of houses to replica shark skin. It almost seems as though the capabilities are endless, and the technology is not anticipated to slow down any time soon. One really exciting application of 3D printing is the generation of body parts. The level of detail that this technology can produce often supersedes that of traditional methods, offering patients a superior fit or design, and they can often be produced at an impressively low cost. Researchers have turned to 3D printing to produce a wide variety of body parts.

MIT's Sherry Turkle on Technology and Real-World Communication Digital communication is so pervasive that most of us don't even bother to question its role in society. That's not the case with Sherry Turkle, who has tracked the way we interact with computers and artificial intelligence since the 1970s. Founder and director of the MIT Initiative on Technology and Self, Turkle has written a new book, Alone Together: Why We Expect More from Technology and Less from Each Other, that asks a simple question: Do digital methods of communication connect us the way interaction in the real world does? 50 Things I Wish I'd Been Taught in High School  As I prepare to leave high school and head into college (aka the ~real world~), I realize I'm lacking knowledge in a lot of important areas. I can recite the quadratic formula from memory, name you 52 prepositions in the English language and write a 10-page research paper, no problem. (Note: some of those are more valuable skills than others.)

Human Genetic Engineering What forms of genetic engineering can be done in human beings? Genetic technology harbors the potential to change the human species forever. The soon to be completed Human Genome Project will empower genetic scientists with a human biological instruction book. Meet Dr. Robot - Health Checkup: Robotics If your idea of surgery comes mainly from TV-doctor dramas, you'll find this operating suite at the Henry Ford Hospital in Detroit a bit disorienting. There's a major surgery in progress — that's what they tell you, anyway — but you can't see a patient. For that matter, you can't see the surgeon. There must be a scalpel wielder here somewhere, but all you can see is people sitting at machines in near darkness. The largest of the machines is a weird behemoth in the center of the room, spiderlike, shrouded in plastic sleeves and protective drapery.

People Who Are Bilingual Are Smart, Creative And Better Lovers If you thought accents were sexy, imagine how absolutely mind-blowing it would be to have the person of your dreams tell you those three magic words in more than one tongue. There’s just something about people expressing their thoughts in multiple languages that is so appealing. It might be that they’re more in tune with their own thoughts and emotions. Flexible sensors turn skin into a touch-sensitive interface for mobile devices iSkin is a thin, flexible, stretchable and visually customizable touch sensor that can be worn directly on the skin. Saarland University computer scientists created three novel classes of on-body devices based on iSkin: (a) FingerStrap, exemplified here with a strap on the index finger for fast, one-handed control of incoming calls; (b) Extensions for wearable devices, exemplified here with a rollout keyboard attached to a smart watch; and SkinStickers, exemplified here with (c) an input surface for a music player attached to the forearm, (d) a click wheel on the back of the hand, and (e) a headset control behind the ear. (credit: Martin Weigel et al./CHI ’15) Computer scientists at Saarland University and Carnegie Mellon University are studying the potential use of the human body as a touch sensitive surface for controlling mobile devices.