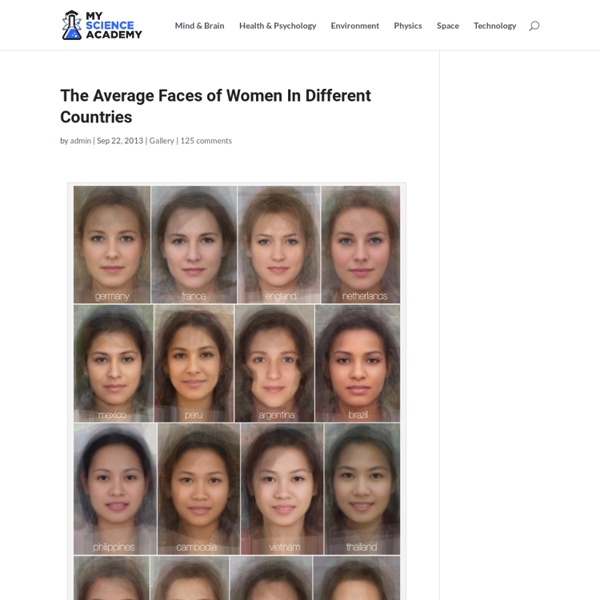 Anatomical terms of location Standard anatomical terms of location deal unambiguously with the anatomy of animals, including humans. Furthermore, the terms are not language-specific, so with little or no translation, they can be understood by all zoologists. While these terms are standardized within specific fields of biology, there are unavoidable, sometimes dramatic, differences between some disciplines. For example, differences in terminology remain a problem that, to some extent, still separates the terminology of human anatomy from that used in the study of various other zoological categories. Introduction[edit]

Curious study calculates the “average” female face for each country Like us on FB: In a recent study, researchers from the Scottish University blended and aligned thousands of photos of women from 40 different countries to calculate the “average” face for each nation. The resulted images are surprisingly beautiful, as aligning and blending numerous images the most part of imperfections is inevitably removed. Nerve Structures of the Spine Nerves control the body’s functions including the vital organs, sensation, and movement. The nervous system receives information and initiates an appropriate response. It is affected by internal and external factors (ie, stimulus). Nerves follow tracts and cross over junctions called synapses.

My 'Naked' Truth  Naked, I stood at the closet doors with the lights on and made myself ready. I took a deep breath and positioned the mirrors so I could see all of me. I consciously worked to remove my self-believed inner image. I opened my eyes and looked very carefully at my body. 100 Very Cool Facts About The Human Body The Brain The human brain is the most complex and least understood part of the human anatomy. There may be a lot we don’t know, but here are a few interesting facts that we’ve got covered. Nerve impulses to and from the brain travel as fast as 170 miles per hour. Ever wonder how you can react so fast to things around you or why that stubbed toe hurts right away? It’s due to the super-speedy movement of nerve impulses from your brain to the rest of your body and vice versa, bringing reactions at the speed of a high powered luxury sports car.The brain operates on the same amount of power as 10-watt light bulb.

Image is Everything: The Secrets of Body Language Share this infographic on your site! <a href=” src=” alt=”Body Language” width=”500″ border=”0″ /></a><br />Source: <a href=” Image is Everything: The Secrets of Body Language How To See An Aura: Learn To See The Hunan Aura Auras are an energy field that is present around every living creature and some inanimate objects. The aura is generated by the 7 major chakras and the 114 minor chakras in the human body. What Color Is Your Aura And What Does It Mean? 'Quadruple helix' DNA seen in human cells 20 January 2013Last updated at 14:19 ET By Jonathan Amos Science correspondent, BBC News A representation of the four-stranded structure (L) with fluorescent markers revealing its presence inside cells (R) Cambridge University scientists say they have seen four-stranded DNA at work in human cells for the first time.

Updated map of the human brain hailed as a scientific tour de force When the German neurologist Korbinian Brodmann first sliced and mapped the human brain more than a century ago he identified 50 distinct regions in the crinkly surface called the cerebral cortex that governs much of what makes us human. Now researchers have updated the 100-year-old map in a scientific tour de force which reveals that the human brain has at least 180 different regions that are important for language, perception, consciousness, thought, attention and sensation. The landmark achievement hands neuroscientists their most comprehensive map of the cortex so far, one that is expected to supersede Brodmann’s as the standard researchers use to talk about the various areas of the brain. Scientists at Washington University in St Louis created the map by combining highly-detailed MRI scans from 210 healthy young adults who had agreed to take part in the Human Connectome Project, a massive effort that aims to understand how neurons in the brain are connected.

Looking At Tears Under A Microscope Reveals A Shocking Fact. Share on Facebook One day Rose-Lynn Fisher wondered if her tears of grief would look different from her tears of joy, so she began to explore them up close under a microscope. She studied 100 different tears and found that basal tears (the ones that our body produces to lubricate our eyes) are drastically different from the tears that happen when we are chopping onions. The tears that come about from hard laughter aren’t even close to the tears of sorrow. Second Brain Found in Heart Neurons - Trust your Gut Feelings The idea of transplanted cellular memory emerged as early as 1920 in the film "Les Mains d'Orleac" written by science fiction writer Maurice Renard. A second brain in the heart is now much more than an idea. Prominent medical experts have recently discovered that many recipients of heart transplants are inheriting donors' memories and consequently report huge changes in their tastes, their personality, and, most extraordinarily, in their emotional memories. Today new science is testing the theory that the heart is involved in our feelings. So what have they discovered so far?

A YouTube Video Is Doctor's Secret Weapon Against Back Pain Katherine Streeter for NPR A woman in her late 20s came to see me recently because her back hurt. She works at a child care center in town where she picks up babies and small children all day long. She felt a twinge in her lower back when hoisting a fussy kid. The pain was bad enough that she went home from work early and was laid out on the couch until she came to see me the next day. In my office she told me she had "done some damage" to her back.