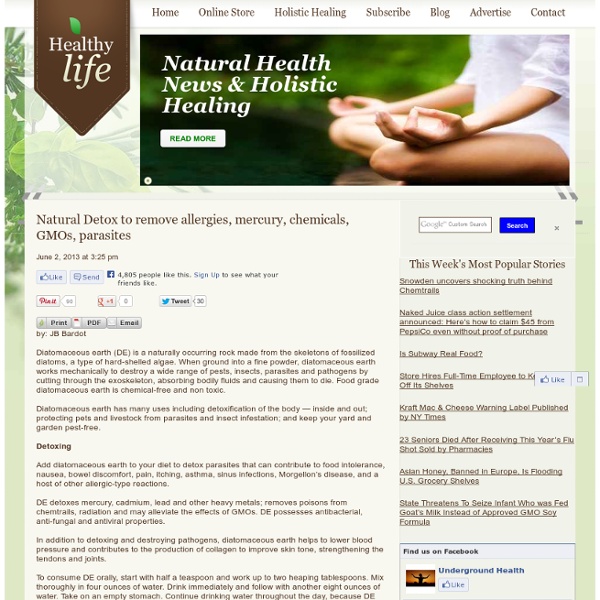 Share by: JB Bardot Diatomaceous earth (DE) is a naturally occurring rock made from the skeletons of fossilized diatoms, a type of hard-shelled algae. When ground into a fine powder, diatomaceous earth works mechanically to destroy a wide range of pests, insects, parasites and pathogens by cutting through the exoskeleton, absorbing bodily fluids and causing them to die. Food grade diatomaceous earth is chemical-free and non toxic. Diatomaceous earth has many uses including detoxification of the body — inside and out; protecting pets and livestock from parasites and insect infestation; and keep your yard and garden pest-free. Detoxing Add diatomaceous earth to your diet to detox parasites that can contribute to food intolerance, nausea, bowel discomfort, pain, itching, asthma, sinus infections, Morgellon’s disease, and a host of other allergic-type reactions. To consume DE orally, start with half a teaspoon and work up to two heaping tablespoons. Protect grains and dry goods Yard and garden Related:  Healthy eating & metabolism • AGRICULTURE & PLANTS • face and body info

6 Power Foods High In Niacin That Improve Blood Circulation, Digestion And Nervous System Blood circulation is key to the functioning of your entire body. If your blood does not circulate as well or as quickly as it should, your organs and muscles may not get the blood they need to work at full efficiency. In addition, proper blood circulation can increase your energy levels and give you more mental clarity. Niacin, also known as vitamin B3, is one of the most important vitamins when it comes to blood circulation. Learn more about this vitamin and how you can make sure you’re getting plenty of it in your diet. What is Niacin? Niacin, or vitamin B3, is a nutrient that contributes to many different functions and tasks of the human body. Furthermore, niacin strengthens blood cells and supports proper circulation throughout the body, improving oxygen and blood flow to various organs and muscles. How Niacin Supports Blood Circulation Niacin is part of your daily recommended nutrition. Foods That Are High in Niacin Sources: Sources:

Top 10 House Plants that Clean the Air Share by Dr. Akilah El – AllThingsHealing.com Here’s 10 plants that help purify the air in your home. Selection is based on ease of growth and maintenance, resistance to pests, efficiency at removing chemical vapors, and transpiration rates. Areca Palm Also known as yellow palm or butterfly palm, the areca palm is one of the most popular and graceful palms. Raphis Palm This large palm has fans six to 12 inch wide with four and 10 thick, shiny leaves. Bamboo Palm Easy to care for and a popular variety. Rubber Plant Bred for toughness, it will tolerate dim light and cool temperatures, making it an excellent house plant. Dracaena “Janet Craig” The dark-green leaves of dracaena “Janet Craig” make it an attractive plant. English Ivy English Ivy is often used as ground cover in public atriums or lobbies. Pothos One of the primary reasons Pothos is popular is it can tolerate lower light, lower humidity and cooler temperatures than many other plants. Ficus Alii Boston Fern Peace Lily (Spathiphyllum)

12 easy ways to remove acid build-up from your body, alkalize your pH and beat disease (NaturalNews) Most of us over the age of five were brought up to believe life is very complicated and our bodies are a jumble of parts, each with a different name and a corresponding ailment; dozens of diets to overcome the effects of highly complex micro-crap called food; and television punctuated with an entire industry of false promises and dark demons hawking medicines for lesions we didn't even know we had. The end result of this twisted perspective is an outlook that dissects humans, infuses each and every cell and fiber with acidosis and creates disease as the result of a lack of wisdom and the truth. As a result of our misguided beliefs, most of us are walking cells of battery acid in leaky vials waiting to overturn or to turn over into the grave. Humans were never meant to be carved up into miniscule parts, each to be treated as separate from one another. Most disease states can't exist when the body's pH is alkaline. · Eat alkaline foods like most fruits and vegetables.

Ronnie Cummins on Turning the Tide Against Monsanto By Dr. Mercola Between October 18 and November 5 the next big GMO-labeling vote will take place in the United States; this time in Washington State, where citizens will cast their votes for the people's initiative 522, "The People's Right to Know Genetically Engineered Food Act." Initiative 522 (I-522) will require seeds, raw agricultural commodities, and processed foods to be labeled if they’re produced using genetic engineering.1The success of this ballot initiative is dependent on public donations, and we’re up against industry giants with very deep pockets, so please, help us win this key GMO labeling battle and continue to build momentum for GMO labeling in other states by making a donation to the Organic Consumers Fund (OCF) today. “We need to get these crops off the market or marginalized. Why Are Chemical Companies in Charge of Our Food Supply? It’s worth remembering though that Monsanto is not alone in recklessly pushing genetically engineered (GE) crops and foods.

The 5 Nutrients You Need for Energy Vitamin E Unless you've been living in a cave for 20 years, you know you need calcium, folate, and vitamin C. But there are a few nutrients you're not so savvy about, according to recent stats, especially if you're dieting. Here, which ones you're most likely lacking, and what to do about it. Fact: Twenty-eight percent of you don't get enough vitamin E. Why You Need 15 milligrams a Day: It protects against heart disease and boosts immunity. Why You're Missing Out: Your diet is too low in fat. How to Get It: Stock up on a well-fortified cereal like Total cereal; a cup supplies 15mg. What do you think of this story? Iron Fact: Twelve percent of you are iron-deficient. Why You Need 18mg a Day: It helps deliver oxygen throughout your body. Why You're Missing Out: You started eating more "meatless meals." How to Get It: Try to include a few servings of lean animal protein per day. Try these healthy recipes: Vegetable Beef Barley Soup Portobello-Smothered Beef Medallions Chipotle Beef Wrap Potassium

Don't let Monsanto take this one away. Dear Organic Consumer, Last year this time, you were pouring your heart and soul into winning the GMO labeling battle in California. So was I. Then Monsanto snatched it away. Please make a generous donation today to help us win this year’s key GMO labeling battle in Washington State. Twelve months later, here we are again. But we’re facing the same enemy. We are ahead in the polls in Washington State. We need to run more ads. Tomorrow, the ballots will be mailed. Once again, victory is so close we can taste it. But our experts in Washington State are clear: I-522 is not in the bag. This has always been a David versus Goliath battle. We need to win this one. Thank you! Ronnie Cummins National Director, Organic Consumers Association and Organic Consumers Fund P.S.

Foodless Friday - The Many Health Benefits of Diatomaceous Earth I’ve gotten a lot of emails and messages from IBIH readers asking for updates on my recent issues with food intolerances. First I want to say thank you so much for your concern and well wishes – it really means a lot to me. I’m so excited to let you know that I can now EAT ALL OF THE THINGS!!!!! Which is both good and bad! I went from being able to eat and drink almost nothing without having a reaction, to now being able to eat and drink pretty much anything. Mr. I ordered the Diatomaceous Earth (Food Grade ONLY) online and started taking just a teaspoon a day (mixed into water) on an empty stomach, and worked up to a tablespoon a day within a week. I don’t know how quickly it actually worked, but my last reaction was on a Sunday evening (it was a bad one) and I started taking the DE the next morning and haven’t had a reaction since. Diatomaceous Earth isn’t just for parasites and all of the other stuff I mentioned, though that alone is more than enough reason for me to keep taking it!

8 Vegetables You Should Eat Raw Cooking vegetables is usually a good idea: Heat breaks down cell walls, releasing antioxidants. But heating cruciferous vegetables (part of the Brassicae family) actually destroys their unique anti-carcinogenic potential. That’s because crucifers, unlike other types of vegetables, are high in glucosinolate, a plant compound that produces naturally occurring small molecules called isothiocyanates, which have been shown to fight cancer. “An enzyme in cruciferous vegetables converts glucosinolates to isothiocyanates when they’re chopped or chewed,” says Canadian dietitian Leslie Beck, author of The Complete A-Z Nutrition Encyclopedia: A Guide to Natural Health. “Glucosinolate hydrolysis products could help prevent cancer by enhancing the elimination of carcinogens before they can damage DNA, or by altering cell-signaling pathways in ways that help prevent normal cells from being transformed into cancerous cells,” writes Dr. Some exceptions... 1. Photo credit: Shutterstock 2. 3. 4. 5. 6. 7.

GMO? Genetically Modified Organism GMO? Genetically Modified Organism A GMO IS: the direct human manipulation of an organism’s DNA in a laboratory environment. A GMO IS NOT: Plants and animals that are traditionally bred to achieve specific characteristics such as breeding dogs or cross-pollination of plants. SCIENCE OF GMOS Genetic modification may include the ADDITION OF DNA from species that would NOT BREED in nature. Genetic modification may also involve REMOVING SPECIFIC STRANDS OF DNA. Cross-species – or transgenic – genetic manipulation has gone so far as to COMBINE FISH DNA WITH STRAWBERRIES and tomatoes. + = GMO foods have only existed in groceries since the late 1990’s. PREVALENCE OF GMOS Your probably eat GMOs EVERY DAY. 30,000 Different GMOs exist on grocery store shelves (largely because of how many processed foods contain soy.) PERCENT OF GMOS IN TOTAL CROP PRODUCTION 2011 (USA) Soybeans 94% Cotton 90% Corn 88% STUDIES OF GMOS NO LONG-TERM TESTING.

Sex Positions That Double as Exercise Missionary In a way, the missionary position is the physical equivalent of the old "I'm busy washing my hair" excuse -- it's the brush-off used when you're lazy, tired, or just not that interested. But despite being one of the most passive contortions for a woman, man-on-top can still provide a pretty good workout. "It depends on how enthusiastic you are about it, but missionary can be great for the core muscles," says Stacy Berman, a New York City-based certified fitness trainer and founder of Stacy's Boot Camp. "If your partner is thrusting toward you, you want to have an equal and opposite thrust back, and that requires a lot of core strength. Patti Britton, author of The Art of Sex Coaching and immediate past president of the American Association of Sexuality Educators, Counselors and Therapists, agrees that you'll definitely be feeling it in your abs. Missionary position can also provide a good butt workout. What do you think of this story? Doggy-Style Cowgirl Lotus Standing Scissors