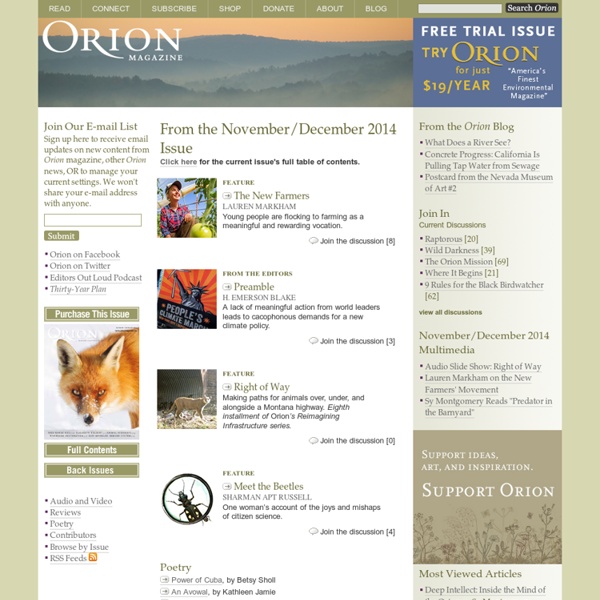 Click here for the current issue's full table of contents. Feature Wild Darkness By Eva Saulitis; Photographs by Michael Raudzis Dinkel Seeing the wonders of nature through the prism of illness. Media & The Arts

SF Diggers (1966-68, beyond) What is the Digger Archives? First time here? The Overview page explains who the Diggers were (are) and the intent of this site. The What's New page highlights additions to this web so returning visitors might check there first. The old Digger Forum Discussion Group has morphed into a WordPress blog. Feel free to check it out. Photo Booth April 16, 2014 Portfolio: Cathedrals of Ice This past February, thanks to an unusually cold winter, the sea caves along the Apostle Islands National Lakeshore, in northern Wisconsin, were accessible by foot for the first time in five years. Visitors were able to walk two miles over the thick ice of Lake Superior to see the ice formations that run up the coastline. Erin Brethauer, a photographer living in North Carolina, visited the sea caves.

Global Warming is Real Mothers News back issue collection May 2010 - July 2013 click the pictures to access these issues (read online or download) via archive.org. PLEASE NOTE: Mothers News is not an online newspaper, and the following year's worth of issues will NOT be made available online. To read new issues you must subscribe, and have the physical paper mailed to you. Mothers News homepage February 2013 8 pages.

Mrs. Deane : nothing is too amazing to be true non-digitally manip­u­lated hand print © Yaseen Al-Obeidy The Kuwait Weeks were born out of a con­ver­sa­tion I had with Kuwaiti pho­tog­ra­pher Mohammed Alk­ouh, who is cur­rently hav­ing a solo show at CAP Kuwait, which includes a num­ber of his recent stu­dio por­traits. We talked about his encoun­ters in the tra­di­tional por­trait stu­dios, which gave him the love for the hand-colored image, and how for him those pho­tographs, like real life instances of Oscar Wilde’s pic­tures of Dorian Gray, con­tained the pres­ence and the youth of a fam­ily mem­ber now in advanced age or even deceased. And how the vin­tage image has this mys­te­ri­ous time-warp qual­ity that we can­not shake off or stop being fas­ci­nated by — an addic­tion mer­ci­less tapped into and catered to by sev­eral online plat­forms, numer­ous photo books, col­lec­tions, some gal­leries, eBay sell­ers and auctioneers. Instal­la­tion view with self por­traits of Al-Obeidy over the years © Hes­ter Keijser

An Excerpt from McSweeney’s Next Issue, Josephine Rowe Illustration: Carson Murdach Do not adjust your set. What you see before you is an excerpt from the latest issue of McSweeney’s, our alluring, laid-back, westerly sister. Curiouser still, the McSweeney’s site has an excerpt from our new interview with Geoff Dyer. Have we gone mad? Yes, because we’re also offering an insane deal: a dual, twenty-percent-off subscription to both our magazines.

PhotoWings Here are some excerpts from this fascinating interview: Malcolm Daniel on our shared photographic heritage. From a historical standpoint, there are things to be learned from the past. From a more spiritual aspect, great works of art have the power to move us, whether they're made now or whether they were made 50 years ago, 100 years ago or 1,000 years ago or more. And so each time we lose something that has that power, we've lost an opportunity to be changed by it. Malcolm Daniel tells the story of his predecessor Maria Morris Hambourg's forthright job interview with Philippe de Montebello, then museum curator and director at The Met.

The Front Row April 18, 2014 The Secrets of Godzilla My artistic career was ended by Godzilla—as a child monster-movie maniac, I stopped attending painting classes when the long-awaited film (the American version, of course, starring Raymond Burr) showed up on Saturday-morning television. So I take the weeklong run of the Burr-free 1954 Japanese-language original, which begins today at Film Forum, personally. Liz Kuball › Blog I know, I know, you’re up to your ears in Kickstarter emails from photographers, and I feel you, I really do. But this one is different. My little sister, Cara, is part of a group called the New Craft Artists in Action (NCAA), based in Boston. That’s them above (Cara is the cute one in the orange scarf). NCAA designs and makes basketball nets and installs them on public courts across the country where nets are missing. Here’s a pic of a net Cara designed.