47 Mind-Blowing Psychology-Proven Facts You Should Know About Yourself 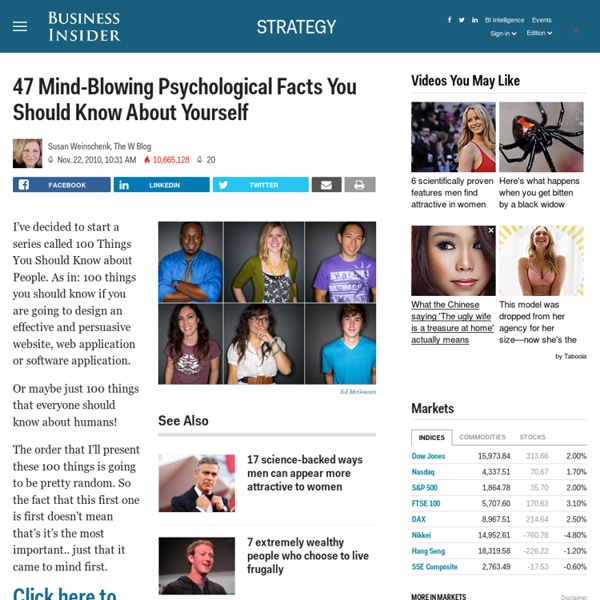 I’ve decided to start a series called 100 Things You Should Know about People. As in: 100 things you should know if you are going to design an effective and persuasive website, web application or software application. Or maybe just 100 things that everyone should know about humans! The order that I’ll present these 100 things is going to be pretty random. So the fact that this first one is first doesn’t mean that’s it’s the most important.. just that it came to mind first. Dr.

5 Psychological Experiments That Prove Humanity is Doomed Cracked.com's new book is now on sale. What follows is one of 22 classic articles that appear in the book, along with 18 new articles that you can't read anywhere else. Psychologists know you have to be careful when you go poking around the human mind because you're never sure what you'll find there. Body Language Throughout history it has been an advantage if an individual can read body language. Body language helps in everyday life from closing a business deal or trusting someone with your life, to recognising when someone is upset. Body language is the art of making an educated guess at a person’s feelings or intentions based on their posture, movement and positioning. To understand a person’s body language you need to take into account more than one aspect of their body language. Take tears for example.

Human Useless Facts Men fart an average of 17 times a day, and women fart an average of 9 times a day. If you fart constantly for 6 years, 9 months and 23 days you would produce enough gas to explode an atomic bomb. The longest ever penis recorded by scientists is 13.5 inches. the color of: an attempt to find out the color of anything What is the color of happiness? Now you have an objective answer with 'The Color Of' app. When you search for something, the app will grab pictures from Instagram and overlap them to form an abstract image with a dominant color, which you can share on Facebook and Twitter, save as your phone's wallpaper, or even send as a postcard. You can even explore the creations of other users. 'The Color Of' project adds on to the emerging field of new media and data art, where the work goes beyond a static medium by co-creating an art piece together with the user, the photo community and their ever-changing data. As a mobile app, users now have a piece of the project with them for an extended art experience anywhere and anytime.

Welcome to Adobe GoLive 6 From Los Angeles Times: It's not all about you Chances are, others aren't judging you as harshly as you think, if at all. By Benedict Carey Times Staff Writer January 13, 2003 Detect Lies Interesting Info -> Lying Index -> How to Detect Lies Become a Human Lie Detector (Part 1) Warning: sometimes ignorance is bliss. 46 Ways To Start A Business With No Money Most people who want to start their own business don’t have a ton of money laying around and it’s probably one the most common questions I get emailed about: How can I get started without a lot of cash? Well I’ve put together a list below of the best ideas I’ve heard and personally used. I hope you find it useful! The three basic strategies to starting a business without much money are:

Scientists discover new species of blind snake in Brazilian river (and please stop sniggering at the back) By Eddie Wrenn Published: 15:46 GMT, 1 August 2012 | Updated: 19:05 GMT, 1 August 2012 Forgive us if this puts you off your dinner because, as snakes go, this is not much of a charmer. The unique creature, atretochoana eiselti, was found after engineers drained a hydroelectric dam which spans a river connected to the Amazon. Biologists discovered six of the unusual-looking creatures - each about a metre long - at the bottom of the river-bed on the Madeira river in Rondonia, in Brazil.