Mindful - taking time for what matters 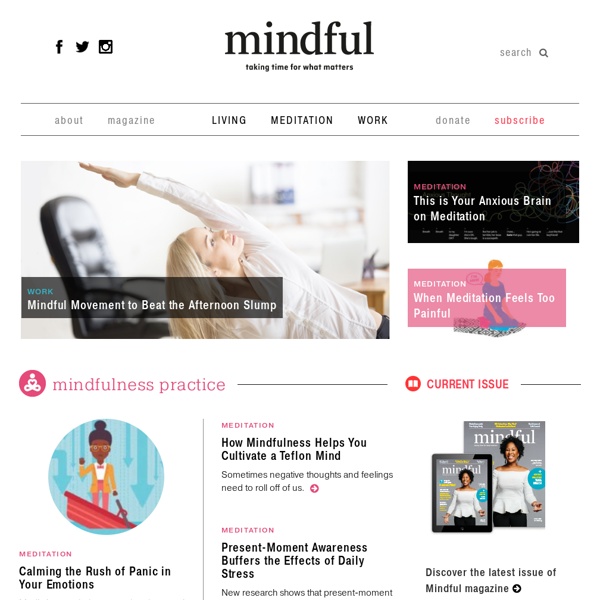 Meditation Techniques For People Who Hate Meditation It’s rare to go a week in 2016 without some new development or rumor coming out of the streaming music industry. But seldom are these tidbits as interesting—or potentially consequential—as the news this week that Spotify is in "advanced talks" to acquire SoundCloud, according to the Financial Times. The deal is by no means set in stone—Recode reports that it’s "more talk and less action" at this point—but it would certainly make a ton of sense. Not only would it shake up the constantly shifting streaming market by combining two major players, but a Spotify-SoundCloud merger would solve some very significant problems for both companies.

100 Benefits Of Meditation Did you know that people who meditate for a short time each day are much happier than people who don’t? Meditators are much healthier with greatly extended life spans, too. As a matter of fact, their health is so much better that a number of insurance companies have reduced premiums for people who meditate. Did you know that experienced meditators have developed many latent abilities that they never knew they had, abilities that exist within every person? EWAO Terms and Conditions Welcome to www.ewao.com (the "Website"). By using the Website, and the products and services of EWAO Limited ("EWAO") to view, upload, download, transmit or publish content (“Content”) available on or through the Website (referred to collectively as the "Services") you irrevocably agree to be bound by these Terms of Service and the EWAO’s Privacy Policy (collectively the "Terms"). These Terms apply both to third-party contributors and viewers of content (“Content”) displayed on the Website. Website.

Rapid Detoxification of the Third Eye (Pineal Gland) By Estella Hoad | Rise Earth — I mentioned earlier in my post about Pre-Cleansing and Intent Setting, one of my goals is to detoxify and decalcify my Pineal Gland. I want to share this information because it is something that has completely inspired me. Here’s a little bit of background first! The Pineal Gland (from wikipedia): “The pineal gland (also called the pineal body, epiphysis cerebri, epiphysis, conarium or the third eye) is a small endocrine gland in the vertebrate brain. It produces the serotonin derivative melatonin, a hormone that affects the modulation of wake/sleep patterns and seasonal functions.

Find Out How You Can Ease Chronic Illness With Meditation and Mindfulness A novel study suggests that meditation and mindfulness can greatly improve the lives of people with chronic illness, particularly those with diabetes mellitus or coronary heart disease. Instead of worrying about the past or the future, patients begin to gently accept the limitations of their illness and focus on what is possible and beneficial in the present moment. The study, published in Behavioral Medicine, found that patients who practice meditation and mindfulness experience better sleep and relaxation patterns and have a more accepting outlook toward living with a long-term illness. Negative thought patterns, such as worry and thought suppression, are also greatly reduced. Thought suppression occurs when a person tries to stop thinking about a specific undesirable thought — often causing it to come back even stronger. This is the known as the “white elephant” effect.

Generador CSS de formularios y otros elementos Its handy and easy-to-use UI allows you to adjust rich graphical styles quickly and without coding. The main features: 2D and 3D transformsmultiple complex transitionsmultiple linear and radial gradientsmultiple box and text shadowscustom fonts (including google fonts)and much moreYou’ll be able to play with all EnjoyCSS parameters just like in photoshop or illustarator (with sliders, colorpickers and etc) combining all possible CSS3 style capabilities for the same element. Moreover you can include pseudo states (:hover, :active, :focus, :after, :before) and style them as well. All required CSS code will be automatically generated by EnjoyCSS. You can easily copy-pase all the code into your environment or get the code for each style aspect separately, e.g., code for each gradient, shadow or transform.

Using Your Senses to Gain a Richer Life Being present is the essence of a mindfulness meditation practice. When we think of meditation, we often think of sitting on the floor, eyes closed, legs crossed, chanting “om,” but you don’t have to begin here — nor do you have to chant om. Actual “sitting” practice is what we call formal practice. Informal practice is bringing presence into our daily lives, when our eyes are wide open. efectos CSS If you are looking for in-depth articles on the inner workings of flexbox, or a comprehensive explanation for using CSS regions, then this is definitely not the post for you. Instead, we have squarely put our focus on those CSS tutorials that not only make the smaller details of the web visually appealing, but are also really useful. You know what we mean… fantastic text effects, innovative button styles, space-saving navigation systems, subtly animated form elements… that kind of thing. We have organised the tutorials and techniques into the following categories: Typography Techniques; Button Tutorials, Menu &amp, Navigation Techniques, Form Element Tutorials, SVG &amp, CSS Styling Techniques, Styling Anchor Links, Web Page Components Tutorials, CSS Layout Techniques, and finally a mixed bag of cool miscellaneous tutorials. Here you go…

Chakra From an 1899 Yoga manuscript in the Braj Bhasa language. Their name derives from the Sanskrit word for "wheel" or "turning", but in the yogic context a better translation of the word is 'vortex or whirlpool'.[1][note 1] The concept of chakra features in tantric and yogic traditions of Hinduism and Buddhism. Etymology[edit] Sanskrit chakra derives from the Proto-Indo-European *kʷekʷlos; its cognates include Greek kuklos, Lithuanian kaklas, Tocharian B kokale, and English "wheel," as well as "circle" and "cycle".[2]