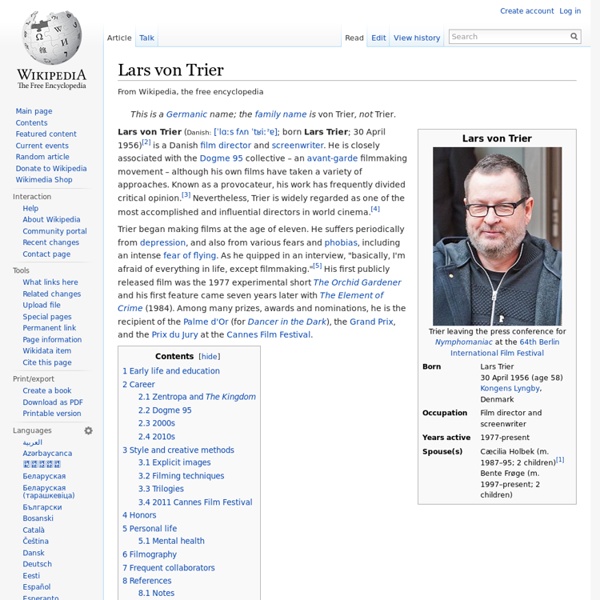 Wim Wenders Alongside filmmaking, Wenders works with the medium of photography, emphasizing images of desolate landscapes.[1][2] Early life[edit] Wenders was born in Düsseldorf into a traditional Catholic family. Set on making his obsession also his life's work, Wenders returned to Germany in 1967 to work in the Düsseldorf office of United Artists. Career[edit] Wenders' book, Emotion Pictures, a collection of diary essays written while a film student, was adapted and broadcast as a series of plays on BBC Radio 3, featuring Peter Capaldi as Wenders, with Gina McKee, Saskia Reeves, Dennis Hopper, Harry Dean Stanton and Ricky Tomlinson, dramatised by Neil Cargill. Wenders was collaborating with artist/journalist and longtime friend Melinda Camber Porter on a documentary feature about his body of work, Wim Wenders - Visions on Film, when Porter passed away - the film remains incomplete. Wenders is a member of the advisory board of World Cinema Foundation. Photography[edit] Selected exhibitions[edit]

Terrence Malick Early life[edit] Film career[edit] Malick started his film career after earning an MFA from the AFI Conservatory in 1969, directing the short film "Lanton Mills". At the AFI, he established contacts with people such as Jack Nicholson, longtime collaborator Jack Fisk, and agent Mike Medavoy, who procured for Malick freelance work revising scripts. He is credited with the screenplay for Pocket Money (1972), and he wrote an early draft of Dirty Harry (1971).[14] Paramount Pictures produced Malick's second film, Days of Heaven (1978), about a love triangle that develops in the farm country of the Texas Panhandle in the early 20th century. Chris Wisniewski about Days of Heaven and The New World[17] Following the release of Days of Heaven, Malick began developing a project for Paramount, titled Q, that explored the origins of life on earth. A. Malick's sixth feature, titled To the Wonder,[32] was shot predominately in Bartlesville, Oklahoma, and a few scenes were filmed in Pawhuska, Oklahoma.

Can science prove Tarantino is the best director in the world? Journalist and film critic, Charlie Gates designed a scientific formula to determine the best film director in the world. So far he’s tested Oliver Stone, Tim Burton and Quentin Tarantino. Gates calls this the Picture Palace Auteur Meter, or PPAM for short. Granted, his formula includes some personal opinions so we’re not sure how “scientific” this really is but it’s still a fun take on the ongoing debate. Here’s the formula: Gates breaks it all down for us by feeding Tarantino into his numbers machine. 2012 Django Unchained – 2009 Inglourious Basterds – 2007 Death Proof – 2004 Kill Bill: Vol. 2 2003 Kill Bill: Vol. 1 – 1997 Jackie Brown – 1994 Pulp Fiction – 1992 Reservoir DogsThat is eight films in 20 years, not very prolific. So, here is the PPAM Index so far:The PPAM Index1. To follow more of Gates’s PPAM, track him on The Picture Palace. Feel the sudden urge to watch QT’s filmography that includes hours of bonus material? And don’t forget to wish QT a Happy 50th Birthday.

Vincenzo Natali Early life[edit] Natali was born in Detroit, Michigan, to a nursery school teacher/painter mother and a photographer father.[1] He is of Italian and English descent.[1] He moved to Toronto, along with his family, at the age of one. During his time in high school, Natali befriended British-born Canadian actor David Hewlett who has appeared in the majority of films that Natali has directed. Natali also attended the film programme at Ryerson University. Career[edit] Filmography[edit] References[edit] External links[edit]

Quentin Tarantino Early life[edit] Tarantino was born in Knoxville, Tennessee in 1963.[6] He is the son of actor and amateur musician Tony Tarantino and nurse Connie McHugh.[7][8] He has a younger half-brother named Ron. Tarantino grew bored with the James Best Acting School and left after two years, although he kept in touch with all of his acting friends. He then landed a job which threatened to interfere with his long-term acting ambitions.[17] As an employee of Video Archives, a now-defunct video rental store in Manhattan Beach, he and fellow movie enthusiasts (including Roger Avary) discussed cinema and customer video recommendations at length. He paid close attention to the types of films people liked to rent and has cited that experience as inspiration for his directorial career.[18] Tarantino has been quoted as saying: "When people ask me if I went to film school I tell them 'no, I went to films. Film career[edit] 1980s[edit] 1990s[edit] 2000s[edit] 2010–present[edit]

250 Best Movies of All Time Map Click the image above to view the full size map. Vodkaster made this cool subway map of 250 of the best films according to IMDb and we broke it down to share where our films fell into place. Enjoy! Life is Beautiful is on the comedy line, one stop between The Great Dictator and Life of Brian. Pulp Fiction and Reservoir Dogs are on a Gangster road between Crime/Mystery and Masterpiece. Kill Bill is on the stop after The Bourne Ultimatum on the action train. There Will Be Blood lies on the Adventure line between The Wages of Fear and The Wizard of Oz. Sin City is one of the first of its kind. No Country For Old Men lies at the intersection of Thriller/Horror/Monster and Gangster. City of God lies on the road of World/Adventure. Trainspotting lies on the road between Requiem for a Dream and Momento. Good Will Hunting is on the Romance line between His Girl Friday and The Philadelphia Story.

Nanni Moretti Giovanni "Nanni" Moretti (born 19 August 1953) is an Italian film director, producer, screenwriter and actor. The Palme d'Or winner in 2001, in 2012 he was the President of the Jury at the Cannes Film Festival.[1] Life and work[edit] In 1976, Giovanni's first feature film Io sono un autarchico (I am Self-Sufficient) was released. In 1978 he produced the movie Ecce Bombo, which tells the story of a student having problems with his entourage. It was screened at the Cannes Festival. He is not religious. Films directed by Moretti[edit] Films in which Moretti acted[edit] Awards[edit] Further reading[edit] Ingmar Bergman Early life[edit] "I devoted my interest to the church's mysterious world of low arches, thick walls, the smell of eternity, the coloured sunlight quivering above the strangest vegetation of medieval paintings and carved figures on ceilings and walls. There was everything that one's imagination could desire — angels, saints, dragons, prophets, devils, humans". Although raised in a devout Lutheran household, Bergman later stated that he lost his faith at age eight and only came to terms with this fact while making Winter Light in 1962.[4] Bergman’s interest in theatre and film began early: "At the age of nine, he traded a set of tin soldiers for a magic lantern, a possession that altered the course of his life. In 1934, aged 16, he was sent to Germany to spend the summer vacation with family friends. In 1937, he entered Stockholm University College (later renamed Stockholm University), to study art and literature. Career[edit] Film work[edit] Repertory company[edit] Financing[edit]

The Talks | Interviews Gus Van Sant Early life[edit] Van Sant was born in Louisville, Kentucky, United States (US), the son of Betty (née Seay) and Gus Green Van Sant, Sr; Gus Van Sant's father was a clothing manufacturer[1] and traveling salesman who rapidly worked his way into middle class prosperity. As a result of his father's job, the family moved continually during Van Sant's childhood. Early career (1978–1989)[edit] After spending time in Europe, Van Sant went to Los Angeles in 1976.[8] He secured a job as a production assistant to writer/director Ken Shapiro, with whom he developed a few ideas, none of which came to fruition. Mala Noche was made two years after Van Sant went to New York to work in an advertising agency. Van Sant moved back to Portland, Oregon, where he set up house and began giving life to the ideas rejected by Universal. Indie and arthouse success (1990–1995)[edit] Mainstream breakout (1997–2003)[edit] Return to arthouse cinema (2003–present) [edit]

David Lynch David Keith Lynch (born January 20, 1946) is an American film director, television director, visual artist, musician and occasional actor. Known for his surrealist films, he has developed a unique cinematic style, which has been dubbed "Lynchian", a style characterized by its dream imagery and meticulous sound design. The surreal, and in many cases, violent, elements contained within his films have been known to "disturb, offend or mystify" audiences.[2] Over his career, Lynch has received three Academy Award nominations[3] for Best Director and a nomination for best screenplay. Life and career[edit] Early life: 1946–1965[edit] Lynch had become interested in painting and drawing from an early age, becoming intrigued by the idea of pursuing it as a career path when living in Virginia, where his friend's father was a professional painter.[18] At Francis C. Philadelphia and short films: 1966–1970[edit] Los Angeles and Eraserhead: 1971–1979[edit]