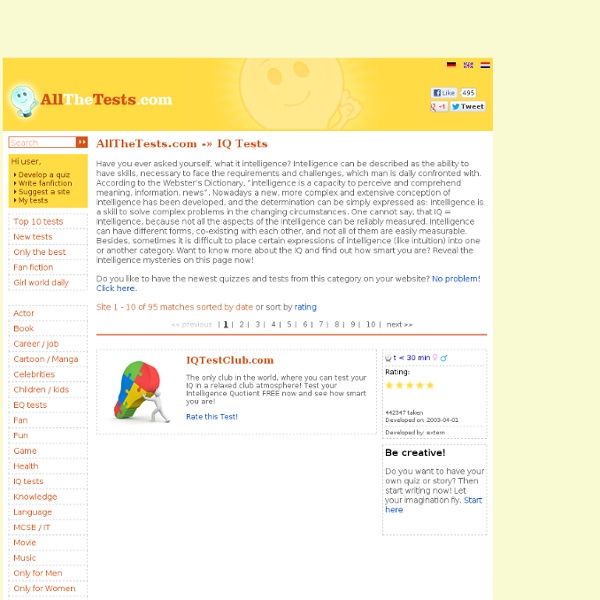 Have you ever asked yourself, what it intelligence? Intelligence can be described as the ability to have skills, necessary to face the requirements and challenges, which man is daily confronted with. According to the Webster’s Dictionary, “intelligence is a capacity to perceive and comprehend meaning, information, news”. Do you like to have the newest quizzes and tests from this category on your website? Site 1 - 10 of 101 matches sorted by date or sort by rating Related:  Cool Stuff • A S S E S S M E N T

The Profoundly Gifted Adult By Inderbir Kaur Sandhu, Ph.D Q: Years after raising three gifted children, I am still puzzling over our middle kid, who is distinct from his sibs and many of his peers. He has been diagnosed at different times with OCD and anxiety disorder, and others have raised the question as to whether or note he has Asperger's syndrome. I do not believe that the latter is the case and that his characteristics are the result of his rather unique mind. He was tested at age 5 only because he was quite different. In fact a private kindergarten later refused to re-enroll him in first grade unless he went to see one of "their" psychologists, because he would not "connect" with other children. His IQ test at age five resulted in an IQ of 150. That said, he cannot lead a conventional life and still pursues his interests irregardless of their practicality. My other children have professions and we all just let "Eric be Eric," but he is barely getting by financially at age 38.

25 Killer Websites that Make You Cleverer It’s easy to forget that we have access to a virtually limitless resource of information, i.e. the Internet. For a lot of us, this is even true at our fingertips, thanks to the ubiquity of smartphones and an ever-increasing push for online greatness by tech engineers all over the world. As a result, there are countless websites out there that are geared to make you smarter and more brilliant for either a low or no cost. 1. This isn’t the first time I’ve recommended this language-teaching website (and app), and it certainly won’t be the last. 2. Have you ever wanted to pick up a subject you’re not well-versed in, but you didn’t have the money to invest in a college course? 3. Guitar is one of the few instruments out there that’s actually pretty easy to learn if you’re a little older, making it one of the most accessible instruments. 4. Founded by Michael Chu, Cooking for Engineers goes further than just providing recipes. 5. 6. 7. 8. 9. 10. 11. 12. 13. 14. 15. 16. 17. 19. 20. 21. 22.

Dabrowski's by Stephanie S. Tolan Written for Hoagies' Gifted Education Page, February, 1999 Dabrowski talked about OE's - over-excitabilities ("superstimulatabilities"), and how the gifted were extremely sensitive in a variety of areas. It's a stimulus-response difference from the norms. The five areas are: Psychomotor This is often thought to mean that the person needs lots of movement and athletic activity, but can also refer to the issue of having trouble smoothing out the mind's activities for sleeping. Sensual Here's the "cut the label out of the shirt" demand, the child who limps as if with a broken leg when a sock seam is twisted. Imaginational These are the dreamers, poets, "space cadets" who are strong visual thinkers, use lots of metaphorical speech. Intellectual Here's the usual definition of "giftedness." Emotional This includes being "happier when happy, sadder when sad, angrier when angry," etc.

To Enable Learning, Put (Emotional) Safety First Building a secure, supportive classroom environment is essential for young brains to learn. Credit: iStockphoto It may not be rocket science, but it sure is neuroscience: Happy learners are healthy learners. While this may seem like (ahem) a no-brainer, there is a good amount of neurological evidence to promote the idea that if students do not feel comfortable in a classroom setting, they will not learn. Physiologically speaking, stressed brains are not able to form the necessary neural connections. Some of the strongest findings in neuroscience -- findings that were suspected decades ago but only recently well-represented using functional magnetic resonance imaging (fMRI) -- tell us why that is: There are certain parts of the brain responsible for emotions. Fear and Frustration Get in the Way Even feelings like embarrassment, boredom, or frustration -- not only fear -- can spur the brain to enter the proverbial "fight or flight" mode. Brain-Soothing Tips Make the classroom stress free.

The intellectual and psychosocial nature of extreme giftedness Powell, P. & Haden, T. Roeper Review Volume 6, No. 3, pp. 131--133 February 1984 This article by Philip Powell and Tony Haden compares the differences of average, moderately and extremely gifted individuals. The authors explore the psychological difficulties of the highly gifted, especially in terms of self-esteem and self-conception. The highly gifted create structure, generate ideas, and efficiently process information in ways that are qualitatively superior to moderately gifted and average ability individuals. The highly gifted are rare in the population. To clarify the nature of the extreme giftedness, the intellectual performance of this group will be compared with the intellectual performance of the moderately gifted and the average person, using relevant research studies. General intelligence Desire to know Originality Common sense Torrance (1965) has argued that the gifted are independent thinkers. Another important difference is in the desire to know complex ideas. Philip M.

20 fantastic ways to find new music that you like (no Last.fm & Pandora inside) OK, everybody knows that Last.fm & Pandora are great services, but there are a lot of other tools that can help us to find new cool music. Some of them just expose daily musical goodies, others make recommendations based on your very own preferences, and others take the web interactivity ever further. Explore the best 20 ways to discover new music in a web 2.0 world. Live music discovery Wonderwheel Wonderwheel is a new tool that aims to help you find similar artists with the ones you like. Awdio My favorite method to discover new music is listening to the Awdio stream (live music stream from more than 60 clubs from all over the world – including DJ sets & parties) and when I hear a nice track, I tag it with Shazam (explained below) to find out what tune is it. Shazam Shazam gives instant satisfaction for those times when you want to know the song that is playing, learn more about the artist, buy the song immediately – or simply share your discovery with your friends. iLike The Filter Mog

Your Personality Type Can Only Be 1 Of The Colors In The Quiz Below. Which One Are You? image via – playbuzz.com Do you envision yourself as an idealist, a realist, an introvert, or an extrovert? It’s a loaded question that requires introspection and to really answer, or even attempt to answer it, you need to know the basic differences among the four personality types. Idealists are those types of individuals who look on the brighter side of life more often than not. In comparison, realists look at the surrounding world and everything it contains exactly as they see it and for what it truly is. Introverts are typically viewed as shy people who usually keep their thoughts and feelings to themselves. Finally, extroverts are extremely social, bold, and outgoing people who display high levels of confidence and passion. There’s an easy way to figure out if you align the closest with the personality types of either an idealist, realist, introvert, or extrovert. What color did you get? Please SHARE This With Family and Friends To See What Their Personality Type Is Loading...

Unlocking the Mysteries of The Artistic Mind Consider the flightless fluffs of brown otherwise known as herring gull chicks. Since they're entirely dependent on their mothers for food, they're born with a powerful instinct. Whenever they see a bird beak, they frantically peck at it, begging for their favorite food: a regurgitated meal. But this reflex can be manipulated. The Truth in the Lie In 1906, Pablo Picasso was determined to reinvent the portrait and push the boundaries of realism, and one of his early subjects was Gertrude Stein. What Picasso saw there that affected him so deeply has been debated—the ancient Iberian art, the weathered faces of Spanish peasants—but his style changed forever. Despite the artistic license, the painting is still recognizable as Stein. What's surprising is that such distortions often make it easier for us to decipher what we're looking at, particularly when they're executed by a master. The sly connection between the instincts of baby gulls and abstract art is the work of V.S.

The 27 Principles to Teaching Yourself Anything (aka The Self-Guided Education Manifesto + PDF download “I have never let my schooling interfere with my education.” —Mark Twain Note: This post is intentionally long. It’s meant to be our compass for learning the skills that matter in the world and throwing theory out the window. At the end of this post I’ve even provided two free PDF downloads to further guide you towards learning what matters (one is a list of over 30 of the best online resources for creating your own passion-filled curriculum). Enter the Unofficial Self-Guided Education Manifesto… Last week’s article on The Birth of Self-Guided Education caught like wildfire. When that happens, I know a topic deserves some respect. Many of last week’s comments blew my mind. Living Legends create their own education. The truth of the matter is every Living Legend (whether they dropped out of high school or got a couple PhD’s) took their education and their learning into their own hands. So without further ado… 1. 2. 3. 4. 5. 6. “90% of my education was outside of the classroom.” 7. 8. 9. 10.