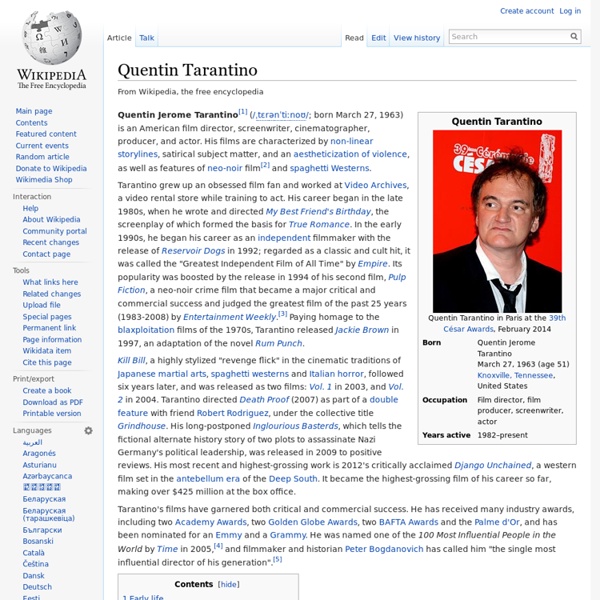 Early life[edit] Tarantino was born in Knoxville, Tennessee in 1963.[6] He is the son of actor and amateur musician Tony Tarantino and nurse Connie McHugh.[7][8] He has a younger half-brother named Ron. Tarantino grew bored with the James Best Acting School and left after two years, although he kept in touch with all of his acting friends. Film career[edit] 1980s[edit] After Tarantino met Lawrence Bender at a Hollywood party, Bender encouraged him to write a screenplay. 1990s[edit] In January 1992, Tarantino's Reservoir Dogs was screened at the Sundance Film Festival. In Pulp Fiction (1994), Tarantino maintained the aestheticization of violence, for which he is known, as well as his non-linear storylines. 2000s[edit] Tarantino's film Inglourious Basterds, released in 2009, is the story of a group of Jewish-American guerilla soldiers in Nazi-occupied France during World War II. 2010–present[edit] Related:  M-Z

Oliver Stone William Oliver Stone (born September 15, 1946) is an American film director, screenwriter, producer and military veteran. Stone came to public prominence between the mid-1980s and the early 1990s for writing and directing a series of films about the Vietnam War, in which he had participated as an infantry soldier. Many of Stone's films focus on contemporary and controversial American political and cultural issues during the late 20th century. Early life[edit] Writing and directing career[edit] 1970s[edit] 1980s[edit] Platoon brought Stone's name to a much wider audience. 1990s[edit] I make my films like you're going to die if you miss the next minute. 1994 saw the release of Stone's satire of the modern media, Natural Born Killers. 2000s[edit] Oliver Stone with Rino Barillari in "Piazza dé Ricci" exit of the restaurant "Pierluigi" in Rome – September 25, 2012 2010s[edit] Documentaries[edit]

Takashi Miike Takashi Miike (三池 崇史, Miike Takashi?, born August 24, 1960) is a highly prolific and controversial Japanese filmmaker. He has directed over ninety theatrical, video, and television productions since his debut in 1991. Miike is credited with directing fifteen productions in the years 2001 and 2002 alone. Biography[edit] Early life[edit] Miike was born in Yao, Osaka, Japan, an area inhabited by the working class and immigrants. Career[edit] Miike's first films were television productions, but he also began directing several direct-to-video V-Cinema releases. Themes of his work[edit] Miike has garnered international notoriety for depicting shocking scenes of extreme violence and sexual perversions. Controversies[edit] However, the British Board of Film Classification refused to allow the release of the film uncut in Britain, citing its extreme levels of sexual violence towards women. Filmography[edit] Director[edit] Actor[edit] Producer[edit] Other work[edit] References[edit] Further reading[edit]

Alex Proyas Early life[edit] Proyas was born to Greek parents in Egypt and moved to Sydney when he was 3.[1] At 17 he attended the Australian Film, Television, and Radio School, and began directing music videos shortly after.[1] He moved to Los Angeles in the United States to further his career, working on MTV music videos and TV commercials.[1] Career[edit] His next project was meant to be an action-oriented adaptation of John Milton's 17th-century Christian epic poem Paradise Lost, starring Bradley Cooper.[9] Both Proyas and Cooper were on hand to debut concept art at ComicCon 2011,[10] but the project was ultimately cancelled over budgetary concerns related to the effects.[11] Proyas also worked with John Foxx on the creation of Parallel Lives, a joint project. Awards[edit] At the 1994 Cannes Film Festival, Proyas was nominated for a Golden Palm award for his short film, Book of Dreams: 'Welcome to Crateland '​. Filmography[edit] Short films[edit] Feature films[edit] Music videos[edit] References[edit]

James Mangold Life and career[edit] James Mangold was born in New York City and is the son of artists Robert Mangold and Sylvia Plimack Mangold.[1] He was raised in New York State's Hudson River Valley.[1] After graduating from Washingtonville High School, Mangold was accepted into and later attended the California Institute of the Arts film/video program.[2] While there, he mentored under Alexander Mackendrick. During his third year, Mackendrick suggested that Mangold should study at CalArts School of Theater as an actor alongside his regular film studies.[citation needed] In 1985 Mangold secured a writer/director deal at Disney.[2] He wrote a television movie and co-wrote the animated feature Oliver and Company.[2] A few years later, Mangold moved to New York and applied to Columbia University's film school,[2] where he graduated with an MFA in film. [3] While there, he studied under Miloš Forman and developed both Heavy and Cop Land. Filmography (director)[edit] References[edit] External links[edit]

Vincent Ward (director) Vincent Ward, ONZM (born 16 February 1956)[1] is a New Zealand film director, screenwriter and artist. While in the United States, Ward wrote the story for Alien 3.[3][4] He also developed the material that was the basis of The Last Samurai, selecting its director, and acting as executive producer on that project before writing and directing River Queen[5] starring Kiefer Sutherland and Samantha Morton. Voted by the audience from 250 feature films Rain of the Children won the Grand Prix at Era New Horizons Film Festival. The film was nominated for best director and won best composer at the Qantas Film and TV Awards in New Zealand. Vincent Ward was also nominated for best director at the Australian Directors Guild Awards[6] for Rain of the Children. In 2010 he published Vincent Ward: The Past Awaits, part mid career chronicle and part large format film photo book.[7] Vincent Ward at the Internet Movie Database Vincent Ward Films

Sam Mendes In 2000, Mendes was appointed a Commander of the Order of the British Empire by Queen Elizabeth II for "services to drama" and in the same year was awarded the Shakespeare Prize by the Alfred Toepfer Foundation in Hamburg, Germany. In 2005, he received a lifetime achievement award from the Directors Guild of Great Britain.[2][3] Early years[edit] Mendes was born in Reading, Berkshire, the only child of Valerie Helene (née Barnett), an author of children's books, and Jameson Peter Mendes, a university professor.[1][4] His father, who is from Trinidad, is of Portuguese and Italian descent,[5] and his mother is an English Jew.[6] His grandfather was the Trinidadian writer Alfred Hubert Mendes.[4][5] Career[edit] Stage[edit] 1994 saw Mendes stage a new production of Lionel Bart's Oliver! Film[edit] Mendes's second film, in 2002, was Road to Perdition, which grossed US$181 million. James Bond[edit] Mendes (right) collaborated with Javier Bardem for Skyfall, November 2012 Personal life[edit]

Errol Morris Errol Mark Morris (born February 5, 1948) is an American film director. In 2003, The Guardian put him seventh in its list of the world's 40 best active directors.[1] In 2003, his film The Fog of War: Eleven Lessons from the Life of Robert S. McNamara won the Academy Award for Best Documentary Feature. Biography[edit] Early life[edit] Morris was born on February 5, 1948, and raised in a Jewish family in Hewlett, New York.[2] After being treated for strabismus in childhood, he refused to wear an eye patch. In the 10th grade, Morris attended The Putney School, a boarding school in Vermont. Morris attended the University of Wisconsin–Madison. Morris left Princeton in 1972, enrolling at Berkeley as a Ph.D. student in philosophy. Unfinished project on Ed Gein[edit] In the fall of 1976, Herzog visited Plainfield again, this time to shoot part of his film Stroszek. First films[edit] Morris accepted the $2,000 and used it to take a trip to Vernon, Florida. The Thin Blue Line[edit] Commercials[edit]

Alan J. Pakula Career[edit] In 1971, Pakula released the first installment of what would informally come to be known as his "paranoia trilogy". Klute, the story of a relationship between a private eye (played by Donald Sutherland) and a call girl (played by Jane Fonda, who won an Oscar for her performance), was a commercial and critical success. Personal life[edit] Pakula was born in The Bronx, New York to parents of Polish Jewish descent, Jeanette (née Goldstein) and Paul Pakula.[3] He was educated at The Hill School, Pottstown, PA and Yale University, where he majored in drama. He has two stepchildren from his marriage with Hope Lange, Christopher and Patricia Murray and three stepchildren from his second marriage. Death[edit] Pakula died on November 19, 1998 in a freak car accident on the Long Island Expressway in Melville, New York. Filmography[edit] References[edit] External links[edit]

George A. Romero Life and career[edit] Romero was born in New York City borough of The Bronx, to a Cuban-born father of Spanish parentage and a Lithuanian American mother.[2] His father has been reported as born in A Coruña with his family coming from the Galician town of Neda,[3][4] although George A. Romero once described his father as of Castilian descent.[5] His father worked as a commercial artist.[6] Romero attended Pittsburgh's Carnegie Mellon University. "It was the filmmaking, the fantasy, the fact that it was a fantasy and it had a few frightening, sort of bizarre things in it. Between these two films, Romero shot Knightriders (1981), another festival favorite about a group of modern-day jousters who reenact tournaments on motorcycles, and the successful Creepshow (1982), written by Stephen King, an anthology of tongue-in-cheek tales modeled after 1950s horror comics. Romero, who lives in Toronto, filmed a fourth "Dead" movie in that city titled Land of the Dead. Personal life[edit] Legacy[edit]

Roman Polanski Roman Polanski (born Rajmund Roman Thierry Polański; 18 August 1933) is a Polish and, since 1976, naturalized-French[1] film director, producer, writer, and actor. Having made films in Poland, the United Kingdom, France and the United States, he is considered one of the few "truly international filmmakers."[2] Polanski's films have inspired diverse directors, including the Coen brothers,[3] Wes Anderson,[4] David Fincher,[5] Atom Egoyan,[6] Darren Aronofsky,[7] Park Chan-wook,[8] Sean Durkin,[9] Abel Ferrara,[10] and Wes Craven.[11] Early life World War II I had just been visiting my grandmother ... when I received a foretaste of things to come. As he roamed the countryside trying to survive in a Poland now occupied by German troops, he witnessed many horrors, such as being "forced to take part in a cruel and sadistic game in which German soldiers took shots at him for target practice After the war After the war he was reunited with his father, and moved back to Kraków. Film director 1960s

Russ Meyer Early years[edit] Film career[edit] His first feature, the nudist comedy The Immoral Mr. Teas (1959), cost $24,000 to produce and eventually grossed more than $1,000,000 on the independent/exploitation circuit, ensconcing Meyer as "King of the Nudies." Over the next decade, he made nearly 20 movies with a trademark blend of odd humor, huge-breasted starlets and All-American sleaze, including such notable films as Faster, Pussycat! Russ Meyer (left) and Roger Ebert in 1970 (photo from Roger Ebert) Despite the fact that hardcore pornographic films overtook Meyer's softcore market share, he retired from filmmaking in the late 1970s a very wealthy man.[10] He made a one-off return to filmmaking in 2001 to direct Russ Meyer's Pandora Peaks, featuring the nude glamor model of the same name. Use of satire[edit] Russ Meyer was also adept at mocking moral stereotypes and flagrantly lampooning conservative American values. Meyer was also known for his quick wit. In his films such as Vixen!

John Sturges Career[edit] He started his career in Hollywood as an editor in 1932. During World War II, he directed documentaries and training films for the United States Army Air Corps. He once met with Akira Kurosawa, who told him that he loved The Magnificent Seven (which was a remake of Kurosawa's Seven Samurai) and presented him with a samurai sword. Escape Artist: The Life and Films of John Sturges by Glenn Lovell (former film critic for the San Jose Mercury News) was published by University of Wisconsin Press in 2008. Awards[edit] Filmography[edit] References[edit] Further reading[edit] External links[edit] John Sturges at the Internet Movie Database