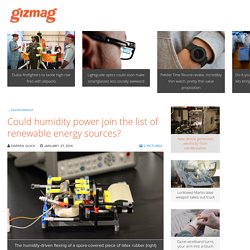 In an effort to demonstrate the potential of this untapped resource, Sahin and his fellow researchers have created prototype electrical generators with rubber sheets that move in response to changes in humidity thanks to a coating of bacterial spores. In a 2012 study published in the Journal of the Royal Society Interface, Sahin, along with Wyss Institute Core Faculty member L. Mahadevan, Ph.D., and Adam Driks,Ph.D., a professor of microbiology and immunology at Loyola University Chicago Stritch School of Medicine, detailed how a soil bacterium called Bacillus subtilis dries up to become a tough, wrinkled, dormant spore. These spores can then be almost immediately restored to their original shape when taking on water. With their ability to shrink reversibly, the researchers realized the spores must be storing energy. "I realized then that this was extremely powerful," said Sahin.

Powerful indeed. Generating Power from Electricity in the Air. Lightning is a powerful manifestation of the electrical charge that can accumulate in the atmosphere. 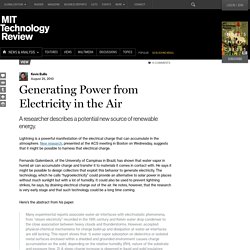 New research, presented at the ACS meeting in Boston on Wednesday, suggests that it might be possible to harness that electrical charge. Fernando Galembeck, of the University of Campinas in Brazil, has shown that water vapor in humid air can accumulate charge and transfer it to materials it comes in contact with. He says it might be possible to design collectors that exploit this behavior to generate electricity. The technology, which he calls “hygroelectricity” could provide an alternative to solar power in places without much sunlight but with a lot of humidity. It could also be used to prevent lightning strikes, he says, by draining electrical charge out of the air. Here’s the abstract from his paper: Humidity Potential as Hygroelectric Power in Indonesia: Opportunities and Challeges. Harvesting energy from humidity: Free, green energy from leaping water droplets. It’s time to get rid of that dehumidifier — you are just throwing away free energy by sucking all the moisture out of the air, according to some new research published by a team from MIT. 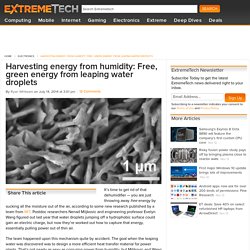 Postdoc researchers Nenad Miljkovic and engineering professor Evelyn Wang figured out last year that water droplets jumping off a hydrophobic surface could gain an electric charge, but now they’re worked out how to capture that energy, essentially pulling power out of thin air. The team happened upon this mechanism quite by accident. The goal when the leaping water was discovered was to design a more efficient heat transfer material for power plants. That’s not nearly as sexy as conjuring power from humidity, but Miljkovic and Wang noticed something odd when working with a super-hydrophobic surface (pictured above). 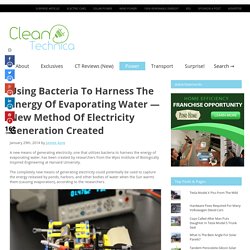 Getting a charge from changes in humidity. Date: Jan 27, 2014 As Bacilli bacteria dry out and form spores (shown here), they wrinkle, and as they rehydrate, they swell. 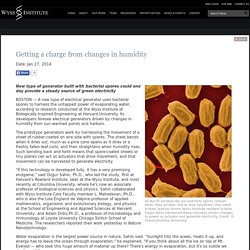 Energy harnessed from humidity can power small devices. Researchers have built devices that harness changes in atmospheric humidity to generate small amounts of electricity, lift tiny weights, and even power a toy car. 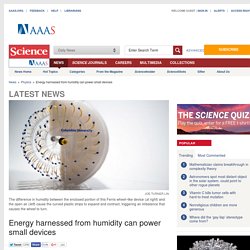 In the grand scheme of things, that captured energy is not free, but it’s pretty darn close. The study suggests that evaporation could be used to operate a variety of gadgets that don’t require a lot of power, scientists say. “This is one of the first experiments to show that humidity can be a source of fuel,” says Albert Schenning, a materials scientist at the Eindhoven University of Technology in the Netherlands who wasn’t involved in the new study.

The team’s designs, he says, “are very nice and very clever.” All the gadgets rely on a simple phenomenon—the change in size of bacterial spores as they absorb moisture from the air and then release it, says team leader Ozgur Sahin, a biophysicist at Columbia University. Renewable energy from evaporating water (w/ Video) An immensely powerful yet invisible force pulls water from the earth to the top of the tallest redwood and delivers snow to the tops of the Himalayas. 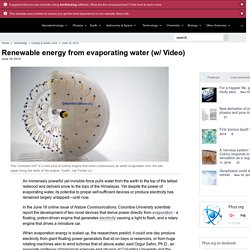 Yet despite the power of evaporating water, its potential to propel self-sufficient devices or produce electricity has remained largely untapped—until now. Acrobatic polymer film developed at MIT harvests energy from water vapor. A team of researchers at MIT’s David H. 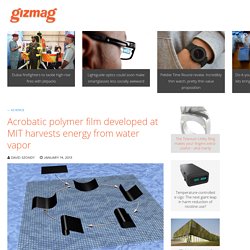 Koch Institute for Integrative Cancer Research has developed a new polymer film that generates power from water vapor. Consisting of two polymer films, the material makes remarkably acrobatic somersaults in the presence of even tiny traces of evaporated water, opening the way for new types of artificial muscles for controlling robotic limbs or powering micro and nanoscopic devices. The new material is very simple in design. New material harvests energy from water vapor. MIT engineers have created a new polymer film that can generate electricity by drawing on a ubiquitous source: water vapor. 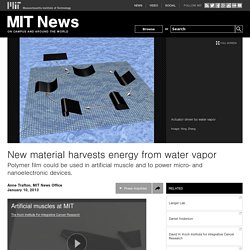 The new material changes its shape after absorbing tiny amounts of evaporated water, allowing it to repeatedly curl up and down. Harnessing this continuous motion could drive robotic limbs or generate enough electricity to power micro- and nanoelectronic devices, such as environmental sensors. “With a sensor powered by a battery, you have to replace it periodically. If you have this device, you can harvest energy from the environment so you don't have to replace it very often,” says Mingming Ma, a postdoc at MIT’s David H. Koch Institute for Integrative Cancer Research and lead author of a paper describing the new material in the Jan. 11 issue of Science. Other authors of the Science paper are Koch Institute postdoc Liang Guo and Daniel Anderson, the Samuel A. Harvesting energy The new film is made from an interlocking network of two different polymers. MIT is creating power out of thin (humid) air. One day, your phone or tablet may be able to replenish its battery simply by airing out. 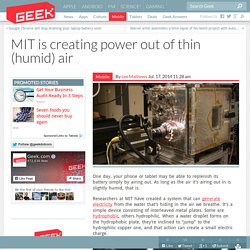 As long as the air it’s airing out in is slightly humid, that is. Researchers at MIT have created a system that can generate electricity from the water that’s hiding in the air we breathe. It’s a simple device consisting of interleaved metal plates. Some are hydrophobic, others hydrophilic. When a water droplet forms on the hydrophobic plate, they’re inclined to “jump” to the hydrophilic copper one, and that action can create a small electric charge.