Six Defining Characteristics of Generation Z. I wish you could meet Lizzy. 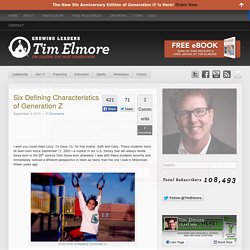 Or Dane. Or, for that matter, Seth and Carly. These students have all been born since September 11, 2001—a marker in our U.S. history that will always divide those born in the 20th century from those born afterward. I was with these students recently and immediately noticed a different perspective in them as teens than the one I saw in Millennials fifteen years ago. At Growing Leaders, we work with both teens and twenty-somethings, helping them move from backpack to briefcase and become leaders along the way. Cynical. While the students I met were fairly happy and well-adjusted, they are not giddy like so many Generation Y kids were in the 90s. Private. Perhaps its because they watched their older siblings get in trouble from posting controversial content on social media, but younger teens don’t want to be tracked. Entrepreneurial. Multi-tasking. By almost every measurement so far, these Gen Z kids will take multi-taking to a new level. Meet Gen Z: the most progressive, conscientious and connected generation to date.

Gen Z are extremely different from Millennials and are more inspired by Malala Yousafzai, the Pakistani activist who stood up to the Taliban and defended her right to an education rather than pop singer Beyonce, according to the report by J. 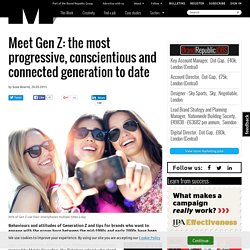 Walter Thompson Intelligence's innovation and futurism division. It revealed Gen Z held progressive views, are ethically-minded and digitally savvy. The report surveyed 1,000 12- to 19-year-olds in the US and the UK in February 2015, to explore ways brands can better engage with Generation Z. With Gen Z’s passion for provenance and sustainability, brands should be honest and transparent. The report suggests brands should not just look to sponsor events but should also host. Matt Wolf, Coca-Cola's head of global gaming, was quoted in the report as saying, "Viewers can see we’re not just a mythical big brand. Forget millennials, brands need to win over Generation Z. Gen Z are progressive, socially conscious and unlike their older peers, they’re far from rebels: instead they’re conformists, according to a report published earlier week by J. 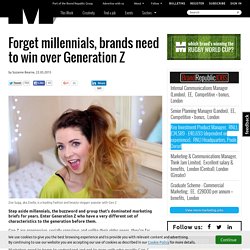 Walter Thompson Intelligence's innovation and futurism division. Marketers need to begin to understand and get to grips with who exactly Gen Z are. Not only do the group, born between the mid-1990s to the early 2000s, comprise a quarter of the population in the UK, but they have a lot of pulling power - in the US alone they have $44bn (£28bn) in annual purchasing power. Just who are Gen Z? Well, they’re ambitious and engaged. Given this generation has grown up surrounded by technology firms like Apple, Facebook and Twitter, they’re the most digitally-attuned generation to date. Emily Sheffield, editor of Miss Vogue, which launched two years ago to target a younger audience, says this generation are aspirational and ambitious. Stand up and pay attention to Gen Z Be transparent, honest and create valuable campaigns. Forget millennials, brands need to win over Generation Z. Marketing To Generation Z: Millennials Move Aside As Brands Shift Focus To Under-18 Customers. 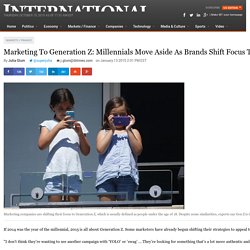 Some marketers have already begun shifting their strategies to appeal to people born in the 1990s and mid-2000s, but successfully getting their attention is more complicated than just throwing ads up on Facebook. Gen Z is completely separate from millennials, experts say, and old techniques won't do for the new generation. "I don’t think they’re wanting to see another campaign with ‘YOLO’ or ‘swag’ … They’re looking for something that’s a lot more authentic and inspiring,” Vinny Squillace, associate director of brand development for marketing agency MRY in Seattle, said.

Marketers say a lot is at stake. Anyone under 18 belongs to Gen Z, which makes up more than a quarter of the United States' population, according to a report from New York ad agency Sparks & Honey. Previously, marketers focused on figuring out the millennial generation, which typically includes people ages 19 through 34. Businessinsider. If you thought Millennials were different, wait for Gen Z.