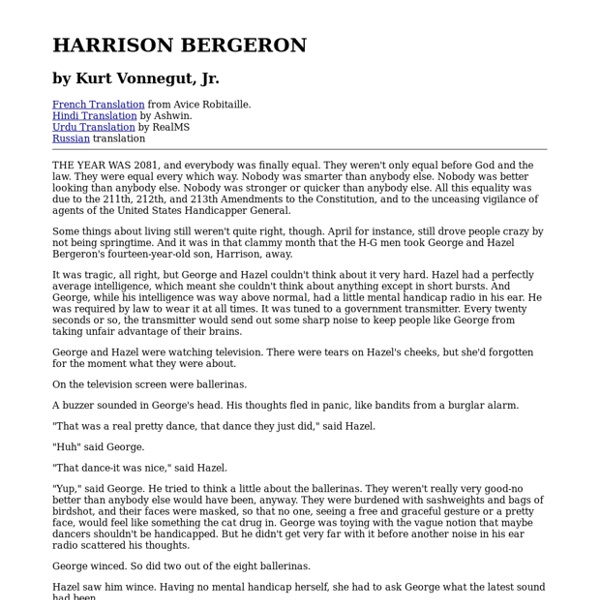 French Translation from Avice Robitaille. Hindi Translation by Ashwin.Urdu Translation by RealMSRussian translation THE YEAR WAS 2081, and everybody was finally equal. They weren't only equal before God and the law. Related:  Stories

Prepare to be aMAZEd What can possibly be cooler than a maze? Oh that's right, a maze made of books! The Book Depository proudly supports aMAZEme; part of the London 2012 Festival, aMAZEme is a gigantic maze up to 2.5 meters high, built from over 200,000 books! You might even find some from the Book Depository in there... Created by Marcos Saboya and Gualter Pupo, the aMAZEme Project consists of a series of ideas that mix concepts, languages, techniques and multimedia. The audience will unexpectedly come into contact with the installation, helping to stimulate their curiosity, knowledge and creativity. aMAZEme is an art project that unites literature, performance, installation, live cinema, images and the Internet, based on three main concepts: Art/Literature + Entertainment + Generosity So if you're in London any time from now until August 26, have a stroll by Southbank and discover the maze at The Clore Ballroom, Royal Festival Hall.

Street Fiction: Urban Fiction Author Interviews, Urban Fiction News, and Urban Fiction Book Reviews Short Stories That Mean A Lot To Me - Library of Alexandria Every once and a while I will run into a short story that will really make me think about my world view. I spend a lot of time reading online, probably way more than I should. Occasionally, something sticks. It worms its way deep into my psyche and I return year after year to re-read it. Number 1: Harrison Bergeron by Kurt Vonnegut, Jr.This story provides a chilling examination of egalitarianism gone too far. Number 2: The Last Question by Isaac Asimov Every beginning must have an end and this is the tale of that end. Number 3: The Last Answer by Isaac Asimov Although not directly related to the previous story, The Last Question, as the name might imply, I still feel that these two stories pair together really nicely. Number 4: The Egg by Andy Weir Another story that begins with the main characters death. Number 5: Talking to God… by The Ragged Trousered Phillospher Another conversation with the “almighty”, fortunately this time our main character makes it out the other end in one piece.

Prisoners Of Childhood-reissue - Alice Miller - Google Books Heads Will Roll by Lish McBride Lena’s not your typical animal trainer. And when she and her unicorn partner, Steve, decide to enter a fight, it’s definitely not your typical fight…. Enjoy a new original story from Lish McBride, the author of Hold Me Closer, Necromancer and its sequel Necromancing the Stone. This short story was acquired for Tor.com by Henry Holt editor Noa Wheeler. The warehouse air burned along my skin after the crisp snap of the outside weather. A skinny reed of a man with a whiteboard sat at a table in the middle of the room, pointedly ignoring everyone. “Lena,” I said. He grabbed a list to his left and scanned. “You with Phantom?” I nodded, shoving my hands into my pockets. The man frowned at his sheet. Again, I nodded. “Are you sure he’s going to fight?” I kept my gaze on him, solid and heavy. “Because sometimes, they refuse,” he continued. “Phantom will fight.” “Good. “Yes, sir.” The man glared at me, I think searching for sarcasm in the “sir.” Phantom is a stage name. Only we couldn’t. “They are.”

A Story of Slavery in Modern America - The Atlantic 点击这里阅读中文版本 (Chinese) | Basahin ang artikulong ito sa Tagalog (Tagalog) Alex Tizon passed away in March. He was a Pulitzer Prize–winning journalist and the author of Big Little Man: In Search of My Asian Self. For more about Alex, please see this editor’s note. The ashes filled a black plastic box about the size of a toaster. Her name was Eudocia Tomas Pulido. Listen to the audio version of this article:Feature stories, read aloud: download the Audm app for your iPhone. To our American neighbors, we were model immigrants, a poster family. After my mother died of leukemia, in 1999, Lola came to live with me in a small town north of Seattle. At baggage claim in Manila, I unzipped my suitcase to make sure Lola’s ashes were still there. Early the next morning I found a driver, an affable middle-aged man who went by the nickname “Doods,” and we hit the road in his truck, weaving through traffic. Slavery has a long history on the islands. Lola agreed, not grasping that the deal was for life.

Judy Astley: acclaimed British Novelist Hippies from the seventies, Mac and Lottie made a ton of money in the days of their progressive soft-rock band Charisma. But they've got little left apart from the large, grand but somewhat dilapidated house where they raised their family. Mac and Lottie now decide, on a whim, to sell up. However, their two elder children, now adults and far more sensible than their parents, see the house as their inheritance. I hardly know anyone with a proper job, complete with full-scale pension and appropriate provision for old age.

Alexander Afanasyev Alexander Nikolayevich Afanasyev (Afanasief, Afanasiev or Afanas'ev,[1] Russian: Александр Николаевич Афанасьев) (23 July [O.S. 11 July] 1826 — 5 October [O.S. 23 September] 1871) was a Russian Slavist and ethnographer who published nearly 600 Russian fairy and folk tales, one of the largest collections of folklore in the world. The first edition of his collection was published in eight volumes from 1855–67, earning him the reputation as being the Russian counterpart to the Brothers Grimm. Life[edit] Alexander Afanasyev was born in the town of Boguchar, Voronezh Governorate of the Russian Empire (modern-day Voronezh Oblast of Russia) into a family of modest means. In three years the family moved to Bobrov, Voronezh where Alexander spent his childhood. In 1855 he headed the state commission responsible for publication of legislative, historical and literary works. After his dismissal he couldn't find a stable job for several years and had to sell his library to feed his family. Work[edit]

What Technology Wants We are not the same folks who marched out of Africa. Our genes have co-evolved with our inventions. In the past 10,000 years alone, in fact, our genes have evolved 100 times faster than the average rate for the previous 6 million years. This should not be a surprise. As we domesticated the dog (in all its breeds) from wolves and bred cows and corn and more from their unrecognizable ancestors, we, too, have been domesticated. We have domesticated ourselves. We have domesticated our humanity as much as we have domesticated our horses. * As we refined this stuff through generations of technological evolution, it lost much of its hardness. A Thousand Years of Helmet Evolution. I make the case in this chapter that the course of biological evolution is not a random drift in the cosmos, which is the claim of current text- book orthodoxy. From this single omnipotent quasicrystal [of DNA] the awesome variety of life in all its unexpected shapes springs forth.