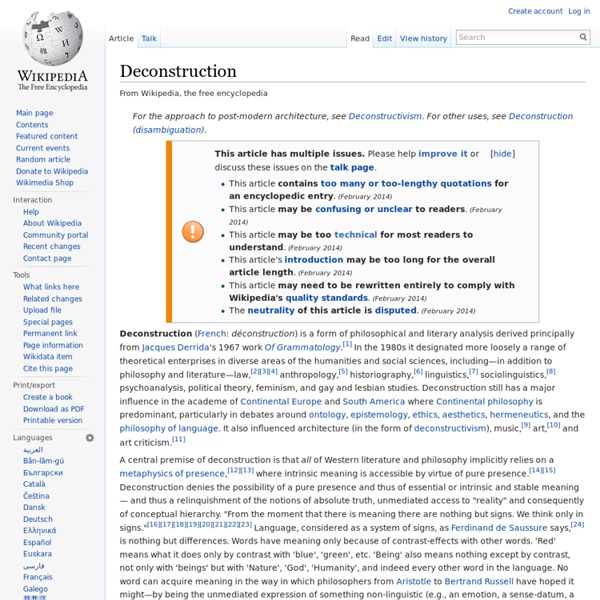 Deconstruction (French: déconstruction) is a form of philosophical and literary analysis derived principally from Jacques Derrida's 1967 work Of Grammatology.[1] In the 1980s it designated more loosely a range of theoretical enterprises in diverse areas of the humanities and social sciences, including—in addition to philosophy and literature—law,[2][3][4] anthropology,[5] historiography,[6] linguistics,[7] sociolinguistics,[8] psychoanalysis, political theory, feminism, and gay and lesbian studies. Deconstruction still has a major influence in the academe of Continental Europe and South America where Continental philosophy is predominant, particularly in debates around ontology, epistemology, ethics, aesthetics, hermeneutics, and the philosophy of language. It also influenced architecture (in the form of deconstructivism), music,[9] art,[10] and art criticism.[11] Etymology[edit] On deconstruction[edit] Derrida's approach to literary criticism[edit] Basic philosophical concerns[edit]

Wayfinding and Social Platforms. Download this gallery (ZIP, null KB) Download full size (74 KB) “The heart of civilization throbs wherever people come together to work, play, shop, study, perform, worship, or just interact. Crowded into bustling spaces, they share the richness and diversity of human experience as well as its challenges. Throughout history, people natural gravitate to city centers and the public places where all the action is. Download full size (215 KB) The book got me thinking about the similarities between wayfinding and the social web. Beyond the architectural and graphic cues, wayfinding also relies on tactile communication - a form of nonverbal communication or body language in which touching, handshaking, kissing, etc. conveys a message from sender to receiver. Download full size (107 KB) The interesting thing about wayfinding design for physical locations is that it must be usable by both locals and tourists.

The Digital Past: When Typefaces Were Experimental Voice asked me to do a post-digital exploration of type to see if a new “experimental” stage was in the wings. But the more I thought about his request, the more I felt it was necessary to look back at the history of digital type design and sort out what really happened before trying to look ahead. Introduction In the early 1990s, the term “experimental” came to be associated with fonts displayed in Emigre magazine. A number of those fonts were worthy of the label, but in the ensuing years “experimental” was attached to any typeface that seemed to be outside the norm. It came to mean wild, radical or weird. Instead of looking solely, or even primarily, at such “experimental” fonts I have chosen to list typefaces that for one reason or another—technological, ideological, conceptual, cultural or even aesthetic—broke new ground in the digital era. Digi-Grotesk S Marconi Bell Centennial Chicago AMS Euler Adobe Times Roman and Adobe Helvetica Lucida Serif and Lucida Sans Citizen Matrix TF Forever Remer

Typo-L : The Crystal Goblet The Crystal Goblet, or Printing Should Be Invisible by Beatrice Warde (1900 -- 1969) Imagine that you have before you a flagon of wine. You may choose your own favourite vintage for this imaginary demonstration, so that it be a deep shimmering crimson in colour. Bear with me in this long-winded and fragrant metaphor; for you will find that almost all the virtues of the perfect wine-glass have a parallel in typography. Now the man who first chose glass instead of clay or metal to hold his wine was a 'modernist' in the sense in which I am going to use that term. Wine is so strange and potent a thing that it has been used in the central ritual of religion in one place and time, and attacked by a virago with a hatchet in another. If you agree with this, you will agree with my one main idea, i.e. that the most important thing about printing is that it conveys thought, ideas, images, from one mind to other minds. London 1955.

The optimism of modernity : what Reduce to the max by Max Bruinsma Reduce to the max by Max Bruinsma A reduced and expanded exploration of Swiss design and culture across the 20th century. For about three quarters of a century now, the phrase ‘Neue Schweizer Grafik’ (’New Swiss Graphic Design’) has been more than a denotative combination of words - it has become a brand name. Büro Destruct On the other hand it is fairly obvious that the new ‘Neue Grafik’ has to dealwith rather different conditions and contexts than the ‘old’. Müller + Hess Here, I think, we are at the root of what could still be discerned as ‘Swiss’ within the global culture of design: a sense for structural order that one could call typographic, not primarily because it deals with type, but because it is deeply concerned with balance and proportion. Sonderegger As an observer from outside the country, this strikes me as being the core of the ‘Swissness’ of contemporary Swiss design. Müller + Hess © Max Bruinsma, Amsterdam.

Speak Up Archive: Deconstructive Typography <em>Captches</em> up Standing avidly in two-thousand-five and reminiscing fondly on typography — you too reminisce on typography from time to time, no? — the deconstructive days of yore seem far behind, even possibly, as Steve Heller said, appear as a “blip in the continuum of graphic design history”. A loud blip, but a blip now quieted by trends based on the reappraisal of wood type,Victorian letterforms and dingbats as well as a global bent towards bright and bold sans and large and elegant serifs. Deformed, scratched and rogue layouts and typography rarely elicit excitement in the new millennium — unless coming from Martin Venezky. Grunge fonts are now bottom-sellers compared to fanciful scripts and comprehensive type families. Its major exponents — Ed Fella, Neville Brody, Jeffrey Keedy, Katherine McCoy, April Greiman to name a few — have not titillated our sensitive retinae in some time. For Yahoo!

Typeface Tuesday: Deconstructed type « amdesignperspectives It’s a gorgeous, sunny Typeface Tuesday here in the District. Overall, I like experimental design. I like it because I enjoy the rule breaking that can happen with unique and innovative designs. I also like the newness — or new perspective — of the work. On my journey to learn more about typefaces, I’ve done some research on deconstructed type or using the forms of letters to create new shapes and meaning. To make it fun and different, the designers blocked out some of the type in the logo. Go here to view the whole project. As for general type guidance, remain in good standing with the Type Gods (and every good designer you know) by not commiting these crimes: Like this: Like Loading...

Johnston (typeface) Johnston printing blocks Johnston (or Johnston Sans) is a humanist sans-serif typeface designed by and named after Edward Johnston. It is well known for its use by Transport for London. Johnston's former student Eric Gill also worked on the development of the typeface,[1] which was later to influence his own Gill Sans typeface, produced 1928–32. The font family was originally called Underground. The Johnston typeface was redesigned in 1979 by Eiichi Kono at Banks & Miles to produce New Johnston; this variant of the original typeface is currently used by London Underground in their signage. In 2002 the typeface was digitized on behalf of Transport for London by Agfa Monotype Corporation, with the addition of two further weights, Book and Book Bold, and as well as corresponding italic variants. A further change occurred in 2008 when Transport for London removed the serif from the numeral '1' and also altered the '4', in both cases reverting these to their original appearance.

A Typeface for the Underground | London Reconnections On Monday the 2nd January 1979, Eiichi Kono walked into the offices of Banks and Miles, one of London’s most renowned graphic design agencies. It was his first day at the firm as a typographer, and he was very excited. Admittedly Eiichi didn’t actually know what he’d be working on – they’d been slightly vague about that – but he was excited nonetheless. This would represent his first major typographical job, and that was something he’d been working towards for some time. Eiichi had been working in the optical printing industry in his native Japan for some years when, in the mid-seventies, he had experienced what he would later describe as a “mid-career crisis.” He chose to begin his journey into the world of typography at the London College of Printing – a choice partially motivated by memories of previous time spent in London. “The symbol was accompanied with a simple, elegant, slightly old-fashioned alphabet.” “That morning,” says Eiichi, “was a bit of a shock.” Creating the Typeface

The History of Visual Communication - The Computer Postmodernity Postmodernity is a term used to describe the social and cultural implications of postmodernism. The term is used by philosophers, social scientists, art critics and social critics to refer to aspects of contemporary art, culture, economics and social conditions that are the result of the unique features of late 20th century and early 21st century life. These features include globalization, consumerism, the fragmentation of authority, and the commoditization of knowledge (see "Modernity"). Deconstruction Deconstruction is a term which is used to denote the application of post-modern theory, to a "text". The more common use of the term is the more general process of pointing to contradictions between the intent and surface of a work, and the assumptions about it. In graphic design deconstructivism gave its name to one of the major typographic movements, starting in the early 1980's and continuing into the late 1990's: Deconstructive Typography. Neville Brody for FUSE

Transformed Dyslexic Typography - The Dyslexie Font Makes Learning and Living Easier for Many The amazing Dyslexie font has the ability to make learning and living easier for thousands of people. Dyslexie was designed for people who suffer from Dyslexia; Dyslexia makes it very difficult to read as letters are flipped and duplicated. Students and adults are faced with the challenge of reading letters that seem as if they are from another language. The Dyslexie font aims to change this, as each letter has been designed specially for dyslexics. The Dyslexie font is a genius design which will improve the lives of many. Implications - Citizens who suffer from ailments face certain challenges throughout their days.