Metanarrative. A metanarrative in critical theory and particularly in postmodernism is a narrative about narratives of historical meaning, experience or knowledge, which offers a society legitimation through the anticipated completion of a (as yet unrealised) master idea.[1][2][3] The term was brought into prominence by Jean-François Lyotard in 1984, with his claim that the postmodern was characterised precisely by a mistrust of the grand narratives (Progress, Enlightenment emancipation, Marxism) that had formed an essential part of modernity.[4] [edit] Simplifying to the extreme, I define postmodern as incredulity toward metanarratives[. ..] 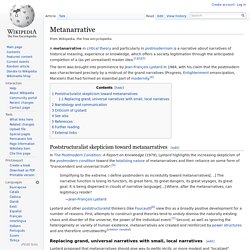 Michel de Montaigne. Michel Eyquem de Montaigne (/mɒnˈteɪn/;[3] French: [miʃɛl ekɛm də mɔ̃tɛɲ]; 28 February 1533 – 13 September 1592) was one of the most influential writers of the French Renaissance, known for popularizing the essay as a literary genre. 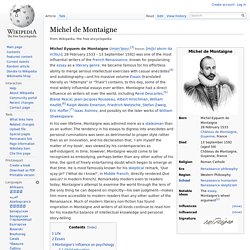 He became famous for his effortless ability to merge serious intellectual exercises with casual anecdotes[4] and autobiography—and his massive volume Essais (translated literally as "Attempts" or "Trials") contains, to this day, some of the most widely influential essays ever written. Laozi. Names[edit] In traditional accounts, Laozi's personal name is usually given as Li Er (李耳, Old *Rəʔ Nəʔ,[5] Mod. 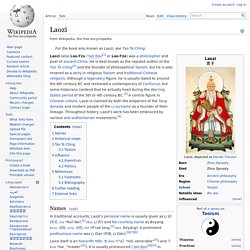 Historical views[edit] In the mid-twentieth century, a consensus emerged among scholars that the historicity of the person known as Laozi is doubtful and that the Tao Te Ching was "a compilation of Taoist sayings by many hands The third story in Sima Qian states that Laozi grew weary of the moral decay of life in Chengzhou and noted the kingdom's decline. Depiction of Laozi in E.T.C. A seventh-century work, the Sandong Zhunang ("Pearly Bag of the Three Caverns"), embellished the relationship between Laozi and Yinxi. Martin Heidegger. Martin Heidegger (German: [ˈmaɐ̯tiːn ˈhaɪdɛɡɐ]; 26 September 1889 – 26 May 1976) was a German philosopher, widely seen as a seminal thinker in the Continental tradition, particularly within the fields of existential phenomenology and philosophical hermeneutics. 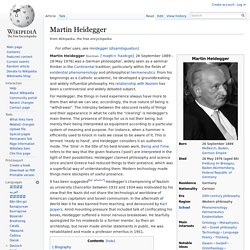 From his beginnings as a Catholic academic, he developed a groundbreaking and widely influential philosophy. His relationship with Nazism has been a controversial and widely debated subject. For Heidegger, the things in lived experience always have more to them than what we can see; accordingly, the true nature of being is “withdrawal”. The interplay between the obscured reality of things and their appearance in what he calls the “clearing” is Heidegger's main theme. The presence of things for us is not their being, but merely their being interpreted as equipment according to a particular system of meaning and purpose. It has been suggested[by whom?] Jean-François Lyotard. Biography[edit] Early life, educational background, and family[edit] Jean François Lyotard was born on August 10, 1924 in Versailles, France to Jean-Pierre Lyotard, a sales representative, and Madeleine Cavalli. 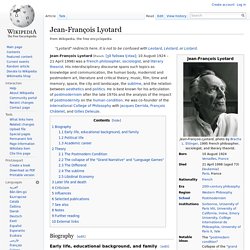 He went to primary school at the Paris lycée Buffon and Louis-le-Grand, and later studied philosophy at the Sorbonne in the late 1940's. Aporia. Aporia (Ancient Greek: ἀπορία: "impasse, difficulty of passing, lack of resources, puzzlement") denotes in philosophy a philosophical puzzle or state of puzzlement and in rhetoric a rhetorically useful expression of doubt. 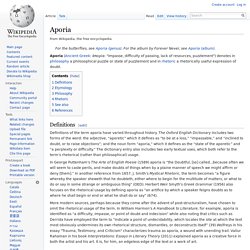 Definitions[edit] Definitions of the term aporia have varied throughout history. The Oxford English Dictionary includes two forms of the word: the adjective, “aporetic” which it defines as “to be at a loss,” “impassable,” and “inclined to doubt, or to raise objections”; and the noun form “aporia,” which it defines as the “state of the aporetic” and “a perplexity or difficulty.” The dictionary entry also includes two early textual uses, which both refer to the term’s rhetorical (rather than philosophical) usage. Of Grammatology. Of Grammatology (French: De la grammatologie) is a 1967 book by French philosopher Jacques Derrida that has been called a foundational text for deconstructive criticism. 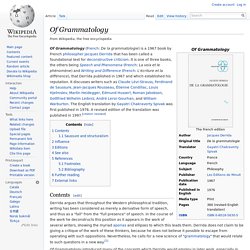 It is one of three books, the others being Speech and Phenomena (French: La voix et le phénomène) and Writing and Difference (French: L'écriture et la différence), that Derrida published in 1967 and which established his reputation. It discusses writers such as Claude Lévi-Strauss, Ferdinand de Saussure, Jean-Jacques Rousseau, Étienne Condillac, Louis Hjelmslev, Martin Heidegger, Edmund Husserl, Roman Jakobson, Gottfried Wilhelm Leibniz, André Leroi-Gourhan, and William Warburton. The English translation by Gayatri Chakravorty Spivak was first published in 1976. A revised edition of the translation was published in 1997. Deconstruction.