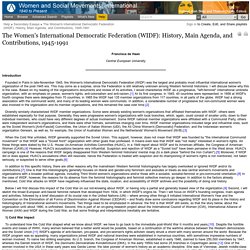 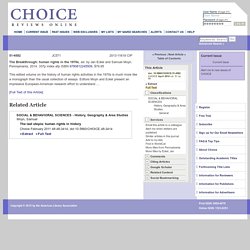 The Quiet Counterrevolution of Human Rights Idealism. Transcribed from This is Hell! 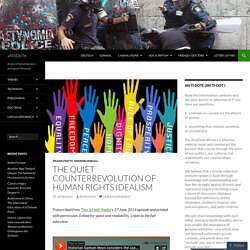 Radio’s 27 June 2014 episode and printed with permission. Edited for space and readability. Listen to the full interview: “Human rights really only make sense when we think about them in a world after empire.” Chuck Mertz: On the line with us right now is historian Samuel Moyn. Samuel Moyn: Hi, thanks for having me. CM: Samuel Moyn is author of Human Rights and the Uses of History and is the Bryce professor of European legal history at Columbia University, where he has taught since 2001. On the Poverty and Possibility of Human Rights in Latin American History. Human Rights and Transnational Solidarity in Cold War Latin AmericaJessica Stites Mor, ed. 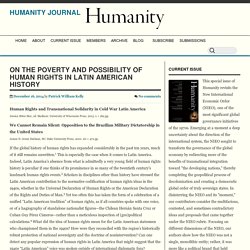 Madison: University of Wisconsin Press, 2013. x + 264 pp. We Cannot Remain Silent: Opposition to the Brazilian Military Dictatorship in the United StatesJames N. Green Durham, NC: Duke University Press, 2010. xiv + 472 pp. If the global history of human rights has expanded considerably in the past ten years, much of it still remains unwritten.1 This is especially the case when it comes to Latin America.

Download PDF. Utopias: A Brief History from Ancient Writings to Virtual Communities - Howard P. Segal. Forty years later, The Ones Who Walk Away from Omelas still haunts. Nerdclave’s Classic Spec is a regular look back at formative short science fiction and fantasy from the 19th and 20th centuries, in order to keep them alive for modern genre devotees. 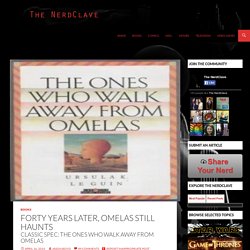 Published: New Dimensions 3, 1973 Reprinted: The Wind’s Twelve Quarters, among several others. This year marks the 40th anniversary of The Ones Who Walk Away from Omelas by Ursula K. Le Guin winning the Hugo Award for Best Short Story. Its message and impact remain as fresh today. Le Guin (A Wizard of Earthsea) has writing skill, exemplified in my opinion by a mixture of florid and conversational, genius enough to merit a Hugo every year. A Parable in Disguise Once upon a time is so over. Le Guin knew all of this back in 1974. It reads like a friend’s idle musings. I wish I could convince you.

She only says the words “once upon a time” after a whole lot of hemming and hawing, and then she quickly undercuts it with the unsure narrator. Take note, young writers. Meta Fiction (A Shrugging Narrator) The Ones Who Walk Away from Omelas. "The Ones Who Walk Away from Omelas" is a 1973 plotless, short, descriptive work of philosophical fiction, popularly classified as a short story, by Ursula K. 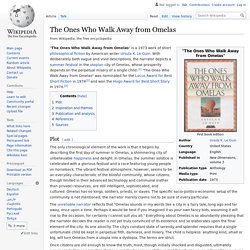 Le Guin. With deliberately both vague and vivid descriptions, the narrator depicts a summer festival in the utopian city of Omelas, whose prosperity depends on the perpetual misery of a single child.[1] "The Ones Who Walk Away from Omelas" was nominated for the Locus Award for Best Short Fiction in 1974[2] and won the Hugo Award for Best Short Story in 1974.[3] Publication[edit]