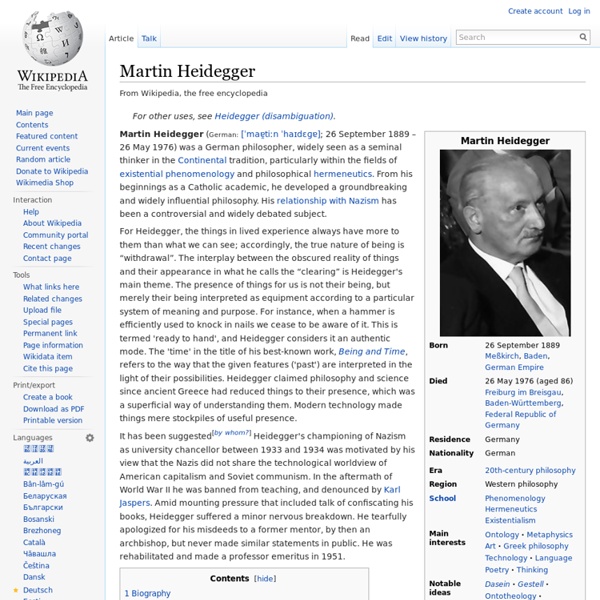 Martin Heidegger (German: [ˈmaɐ̯tiːn ˈhaɪdɛɡɐ]; 26 September 1889 – 26 May 1976) was a German philosopher, widely seen as a seminal thinker in the Continental tradition, particularly within the fields of existential phenomenology and philosophical hermeneutics. From his beginnings as a Catholic academic, he developed a groundbreaking and widely influential philosophy. His relationship with Nazism has been a controversial and widely debated subject. For Heidegger, the things in lived experience always have more to them than what we can see; accordingly, the true nature of being is “withdrawal”. The interplay between the obscured reality of things and their appearance in what he calls the “clearing” is Heidegger's main theme. The presence of things for us is not their being, but merely their being interpreted as equipment according to a particular system of meaning and purpose. It has been suggested[by whom?] Biography[edit] Early years[edit] Marburg[edit] Freiburg[edit] Post-war[edit]

Related:  - • The Cloud of Unknowing • The Sorrow of Young Werther by Goethe

Pre-established harmony Overview[edit] Leibniz's theory is best known as a solution to the mind–body problem of how mind can interact with the body. Leibniz rejected the idea of physical bodies affecting each other, and explained all physical causation in this way. Under pre-established harmony, the preprogramming of each mind must be extremely complex, since only it causes its own thoughts or actions, for as long as it exists. In order to appear to interact, each substance's "program" must contain a description of either the entire universe, or of how the object is to behave at all times during all interactions which appear to occur.

Heidegger, Martin Martin Heidegger is widely acknowledged to be one of the most original and important philosophers of the 20th century, while remaining one of the most controversial. His thinking has contributed to such diverse fields as phenomenology (Merleau-Ponty), existentialism (Sartre, Ortega y Gasset), hermeneutics (Gadamer, Ricoeur), political theory (Arendt, Marcuse, Habermas), psychology (Boss, Binswanger, Rollo May), and theology (Bultmann, Rahner, Tillich). His critique of traditional metaphysics and his opposition to positivism and technological world domination have been embraced by leading theorists of postmodernity (Derrida, Foucault, and Lyotard). Demiurge In the Platonic, Neopythagorean, Middle Platonic, and Neoplatonic schools of philosophy, the demiurge (/ˈdɛmiˌɜrdʒ/) is an artisan-like figure responsible for the fashioning and maintenance of the physical universe. The term was subsequently adopted by the Gnostics. Although a fashioner, the demiurge is not necessarily the same as the creator figure in the familiar monotheistic sense, because both the demiurge itself plus the material from which the demiurge fashions the universe are considered either uncreated and eternal, or the product of some other being, depending on the system. Platonism and Neoplatonism[edit] Middle Platonism[edit]

Friedrich Nietzsche Friedrich Wilhelm Nietzsche (/ˈniːtʃə/[1] or /ˈniːtʃi/;[2] German: [ˈfʁiːdʁɪç ˈvɪlhɛlm ˈniːt͡sʃə]; 15 October 1844 – 25 August 1900) was a German philosopher, cultural critic, poet, composer and Latin and Greek scholar. He wrote several critical texts on religion, morality, contemporary culture, philosophy and science, displaying a fondness for metaphor[3] and irony. Nietzsche's key ideas include perspectivism, the will to power, the death of God, the Übermensch and eternal recurrence. One of the key tenets of his philosophy is "life-affirmation", which embraces the realities of the world in which we live over the idea of a world beyond.

Nicolas Malebranche Nicolas Malebranche, Oratory of Jesus (; French: [nikɔlɑ malbrɑ̃ʃ]; 6 August 1638 – 13 October 1715), was a French Oratorian[1] priest and rationalist philosopher. In his works, he sought to synthesize the thought of St. Augustine and Descartes, in order to demonstrate the active role of God in every aspect of the world. Malebranche is best known for his doctrines of vision in God, occasionalism and ontologism. Biography[edit] Heideggerian terminology Martin Heidegger, the 20th-century German philosopher, introduced to the world a large body of work which intended a profound change of direction for philosophy. Such was the depth of change that he found himself needing to introduce a number of neologisms and adapted vocabulary, often connected to idiomatic words and phrases in the German language. Two of his most basic neologisms, present-at-hand and ready-to-hand, are used to describe various attitudes toward things in the world.

Theory of forms The theory of Forms or theory of Ideas[1][2][3] is a philosophical theory, concept, or world-view, attributed to Plato, that the physical world is not as real or true as timeless, absolute, unchangeable ideas.[4] According to this theory, ideas in this sense, often capitalized and translated as "Ideas" or "Forms",[5] are the non-physical essences of all things, of which objects and matter in the physical world are merely imitations. Plato speaks of these entities only through the characters (primarily Socrates) of his dialogues who sometimes suggest that these Forms are the only objects of study that can provide knowledge. The theory itself is contested from within Plato's dialogues, and it is a general point of controversy in philosophy. Whether the theory represents Plato's own views is held in doubt by modern scholarship.[6] However, the theory is considered a classical solution to the problem of universals. Forms[edit]

Adam Weishaupt Johann Adam Weishaupt (6 February 1748 – 18 November 1830[1][2][3][4]) was a German philosopher and founder of the secret society, the Order of Illuminati. Early life[edit] After Pope Clement XIV’s suppression of the Society of Jesus in 1773, Weishaupt became a professor of canon law,[13] a position that was held exclusively by the Jesuits until that time. In 1775 Weishaupt was introduced[14] to the empirical philosophy of Johann Georg Heinrich Feder[15] of the University of Göttingen. Both Feder and Weishaupt would later become opponents of Kantian idealism.[16] Founder of the Illuminati[edit]

On the Fourfold Root of the Principle of Sufficient Reason Translated by Mme. KARL HILLEBRAND. THIS treatise on Elementary Philosophy, which first appeared in the year 1813, when it procured for me the degree of doctor, afterwards became the substructure for the whole of my system. It cannot, therefore, be allowed to remain out of print, as has been the case, without my knowledge, for the last four years. On the other hand, to send a juvenile work like this once more into the world with all its faults and blemishes, seemed to me unjustifiable.

Pierre Teilhard de Chardin Pierre Teilhard de Chardin SJ (French: [pjɛʁ tejaʁ də ʃaʁdɛ̃] ( listen ); 1 May 1881 – 10 April 1955) was a French idealist philosopher and Jesuit priest who trained as a paleontologist and geologist and took part in the discovery of Peking Man. He conceived the vitalist idea of the Omega Point (a maximum level of complexity and consciousness towards which he believed the universe was evolving), and he developed Vladimir Vernadsky's concept of noosphere. Although a monitum was issued in regard to some of Teilhard's ideas, he has been posthumously praised by Pope Benedict XVI and other eminent Catholic figures, and his theological teachings were cited by Pope Francis in the 2015 encyclical, Laudato si'. The response to his writings by evolutionary biologists has been, with some exceptions, decidedly negative, although recently some have written more positively about Teilhard's ideas. Life[edit]

Anaximenes of Miletus Ancient Greek Pre-Socratic philosopher Anaximenes of Miletus (; Greek: Ἀναξιμένης ὁ Μιλήσιος; c. 586 – c. 526 BC) was an Ancient Greek Pre-Socratic philosopher active in the latter half of the 6th century BC.[1][2] The details of his life are obscure because none of his work has been preserved. Anaximenes' ideas and philosophies are only known today because of comments made by Aristotle and other writers on the history of Greek philosophy.[3] Apollodorus of Damascus noted the dates Anaximander was alive in relation to well-known historical events, and estimated Anaximenes' lifespan as having occurred during the same time period in which Cyrus the Great defeated Croesus at the Battle of Thymbra in 546 BC.[2] Anaximenes was the last known Milesian philosopher, as Miletus was captured by the Persian army in 494 BC.[7] Anaximenes and the Arche[edit]