These Streets are Watching. These Streets are Watching is a 50-minute video on police accountability in three communities in the United States; Denver, Cincinnati and Berkeley.[1] The video documents incidents that its creators consider demonstrate the unnecessary use of force by the police.[2] Independent filmmaker, Jacob Crawford, weaves the responses made in these three cities to police brutality into a single tale of community empowerment and direct action. 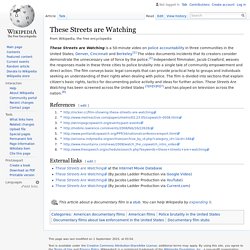 The film conveys basic legal concepts that can provide practical help to groups and individuals seeking an understanding of their rights when dealing with police. The film is divided into sections that explain citizen's basic rights, tactics for documenting police activity and ideas for further action. These Streets Are Watching has been screened across the United States [3][4][5][6][7] and has played on television across the nation.[8] References[edit] External links[edit] 4 Sequence – Big Brother is Watching You. In this chapter we will be looking at the surveillance society we live in and the consequences it has on our privacy and personal freedom. 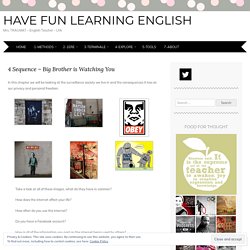 Take a look at all of these images, what do they have in common? Glogin?URI= Overview | How does George Orwell’s vision of technology and its uses in “1984” compare with today’s reality? 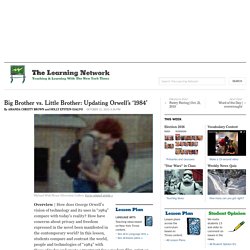 How have concerns about privacy and freedom expressed in the novel been manifested in the contemporary world? In this lesson, students compare and contrast the world, people and technologies of “1984” with those of today and create a treatment for a modern film, print or stage adaptation that revolves around current technologies. Materials | Full text of “1984,” computers with Internet access, software for podcasting and projection equipment, copies of the handout “1984” vs. Today (PDF), video cameras and film-editing software (optional) Warm-Up | Give students the following list of words from “1984”: Big BrotherdoublethinkthoughtcrimeNewspeakmemory holeOrwellian Students who have read the novel will recognize their provenance and should define them, as well as give a contemporary example of something that could be described similarly.

What does Mr. Related resources: Technology 3. George Orwell. Nineteen Eighty-four, by George Orwell : chapter1.1. It was a bright cold day in April, and the clocks were striking thirteen. 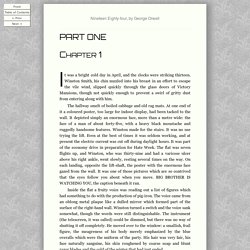 Winston Smith, his chin nuzzled into his breast in an effort to escape the vile wind, slipped quickly through the glass doors of Victory Mansions, though not quickly enough to prevent a swirl of gritty dust from entering along with him. The hallway smelt of boiled cabbage and old rag mats. At one end of it a coloured poster, too large for indoor display, had been tacked to the wall. It depicted simply an enormous face, more than a metre wide: the face of a man of about forty-five, with a heavy black moustache and ruggedly handsome features. Winston made for the stairs.  Anglais Orléans-Tours : 2nde: séquences et ressources. 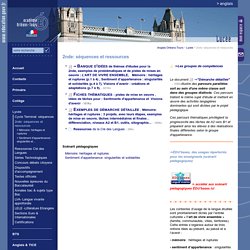 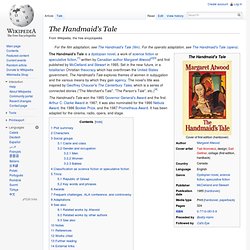 Clarke Award in 1987; it was also nominated for the 1986 Nebula Award, the 1986 Booker Prize, and the 1987 Prometheus Award. It has been adapted for the cinema, radio, opera, and stage. Plot summary[edit] The Handmaid's Tale is set in the near future in the Republic of Gilead, a theocratic military dictatorship formed within the borders of what was formerly the United States of America. Beginning with a staged terrorist attack (blamed on Islamic extremist terrorists) that kills the President and most of Congress, a movement calling itself the "Sons of Jacob" launches a revolution and suspends the United States Constitution under the pretext of restoring order.

The story is presented from the point of view of a woman called Offred (literally Of-Fred). The Commander is a high-ranking official in Gilead. After Offred's initial meeting with Nick, they begin to rendezvous more frequently. Characters[edit] Brave New World by Aldous Huxley (etext) Chapter One A SQUAT grey building of only thirty-four stories. 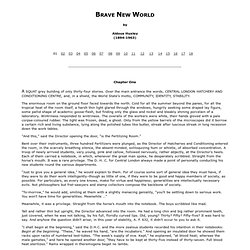 Over the main entrance the words, CENTRAL LONDON HATCHERY AND CONDITIONING CENTRE, and, in a shield, the World State's motto, COMMUNITY, IDENTITY, STABILITY. The enormous room on the ground floor faced towards the north. Nineteen Eighty-four, by George Orwell : chapter1.1.