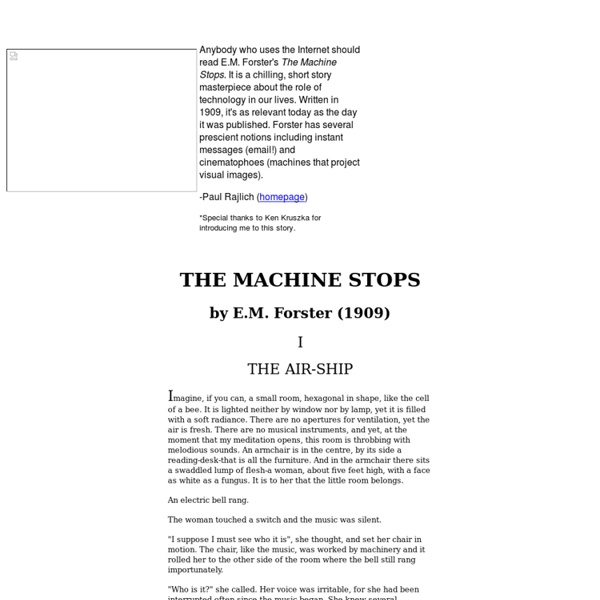 Imagine, if you can, a small room, hexagonal in shape, like the cell of a bee. It is lighted neither by window nor by lamp, yet it is filled with a soft radiance. There are no apertures for ventilation, yet the air is fresh. There are no musical instruments, and yet, at the moment that my meditation opens, this room is throbbing with melodious sounds. An armchair is in the centre, by its side a reading-desk-that is all the furniture. And in the armchair there sits a swaddled lump of flesh-a woman, about five feet high, with a face as white as a fungus. An electric bell rang. The woman touched a switch and the music was silent. "I suppose I must see who it is", she thought, and set her chair in motion. "Who is it?" But when she listened into the receiver, her white face wrinkled into smiles, and she said: "Very well. She touched the isolation knob, so that no one else could speak to her. "Be quick!" "Kuno, how slow you are." He smiled gravely. "I really believe you enjoy dawdling." "Well?"

Experts rethink good study habits Ask someone for tips on proper study skills, and you’re likely going to get an answer that ranges from “study in a quiet, sealed room” to “drink a sip of water each time you need to remember a fact.” But from folksy suggestions to ideas based in actual science, study skills are just about how well you train your brain to absorb information. The New York Times reports that scientists have determined a few simple techniques that can enable a student to absorb more information. Many of these new findings contradict commonly-accepted study habits. One might think that focusing on a particular subject for intense, long stretches makes the most sense. Or putting yourself in a closed room with no distractions enables the best mental retention.

Harrison Bergeron French Translation from Avice Robitaille. Hindi Translation by Ashwin.Urdu Translation by RealMSRussian translation THE YEAR WAS 2081, and everybody was finally equal. They weren't only equal before God and the law. How To Know If You’ll Be Successful – Thrive Global Life is complex and messy. It can be extremely difficult to get traction, let alone find motivation. But motivation is something you can learn to create at will.

I Am a Zombie Filled With Love - by Isaac Marion By Isaac Marion I am a zombie, and it's not so bad. I'm learning to live with it. I'm sorry I can't properly introduce myself, but I don't have a name anymore. To Detect Bombs Efficiently and Cheaply, Try Using Wi-Fi WI-FI FOR GOOD. You probably use Wi-Fi on the regular to connect your smartphone, computer, or other electronic device to the glory of the world wide web. But soon, that same technology could also keep you safe in real-life public areas. According to a peer-reviewed study led by researchers from Rutgers University-New Brunswick, ordinary Wi-Fi can effectively and cheaply detect weapons, bombs, or explosive chemicals contained within bags.

Atheism Everywhere: Zero-Zero Banking; an alternative to Fractional Reserve by Cyrus "Kir" Komrik We'd like to tackle some common myths here about banking in free enterprise systems in which the United States is usually given as the template for the re-telling of a description of fractional reserve banking that, unfortunately, reflects a fundamental lack of understanding of how the banking system in the U.S. really works. Because this misunderstanding is so common we felt it an imperative to clear this up here so that banking under General Federalism can also be properly understood. Values Explanations > Values About values | Historical values | Research on values | So what? Values is a confusing word that often gets confused with 'value' as in the value you get from buying a cheap, but well-built house.

The Necklace by Guy de Maupassant The Necklace She was one of those pretty and charming girls born, as though fate had blundered over her, into a family of artisans. She had no marriage portion, no expectations, no means of getting known, understood, loved, and wedded by a man of wealth and distinction; and she let herself be married off to a little clerk in the Ministry of Education. Her tastes were simple because she had never been able to afford any other, but she was as unhappy as though she had married beneath her; for women have no caste or class, their beauty, grace, and charm serving them for birth or family, their natural delicacy, their instinctive elegance, their nimbleness of wit, are their only mark of rank, and put the slum girl on a level with the highest lady in the land. She suffered endlessly, feeling herself born for every delicacy and luxury.

Dr. Death: The Shocking Story of Christopher Duntsch, a Madman with a Scalpel Lee Passmore can’t feel his feet. His right leg is as stiff as his pressed blue jeans, and when he walks, he appears to use his hips to heave it forward. He also vibrates—his chest shakes, his right hand jitters. But Passmore is one of the lucky ones. He’ll tell you as much. He’s alive. Who Owns The Federal Reserve? This article was first published by Global Research in October 2008 “Some people think that the Federal Reserve Banks are United States Government institutions. They are private monopolies which prey upon the people of these United States for the benefit of themselves and their foreign customers; foreign and domestic speculators and swindlers; and rich and predatory money lenders.” – The Honorable Louis McFadden, Chairman of the House Banking and Currency Committee in the 1930s The Federal Reserve (or Fed) has assumed sweeping new powers in the last year. In an unprecedented move in March 2008, the New York Fed advanced the funds for JPMorgan Chase Bank to buy investment bank Bear Stearns for pennies on the dollar. “The Treasury Department, for the first time in its history, said it would begin selling bonds for the Federal Reserve in an effort to help the central bank deal with its unprecedented borrowing needs.”2

There is no such thing as being ready for love We live in a golden age of advice-giving, of gurus and know-it-alls and professional grandmothers, of someone who knows better as its own industry. Social media means that we are pressed closer than we have ever been against the available examples of other people’s lives. With so much permission and even obligation to look at one another, there is more drive than ever to see other lives as comparable to our own. It makes sense that we would reach for nearly any nearby person’s choices as a lesson we can graft onto our own living. One piece of advice popular in these quasi-professional advice-giving times is some version of the sentiment that “you have to love yourself before you can love anyone else.” This standby is a near cousin of the even more insidious “how can you expect anyone to love you if you don’t love yourself?”