2081 Full Movie. Using Dystopian Fiction to Probe the Meaning of Citizenship. By David Sebek The image is iconic. 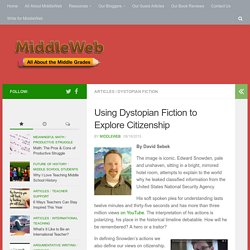 Edward Snowden, pale and unshaven, sitting in a bright, mirrored hotel room, attempts to explain to the world why he leaked classified information from the United States National Security Agency. Utopia / Dystopia. Utopia. For thousands of years human beings have dreamt of perfect worlds, worlds free of conflict, hunger and unhappiness. 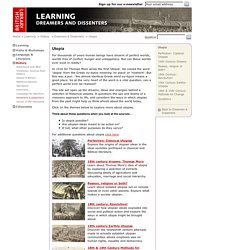 But can these worlds ever exist in reality? In 1516 Sir Thomas More wrote the first 'Utopia'. He coined the word 'utopia' from the Greek ou-topos meaning 'no place' or 'nowhere'. But this was a pun - the almost identical Greek word eu-topos means a good place. So at the very heart of the word is a vital question: can a perfect world ever be realised? REFUGE // A Moonlit Short Film. Over population, over consumption - in pictures. Using an Op-Doc Video to Teach Argumentative Writing. Video Below we share an idea from Allison Marchetti, an English teacher at Trinity Episcopal School in Richmond, Va., who uses an Op-Doc video about the problem of Internet addiction among China’s youth to teach argumentative writing to her ninth graders. 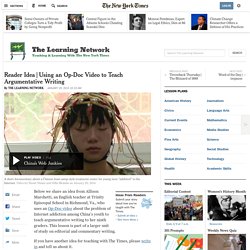 This lesson is part of a larger unit of study on editorial and commentary writing. If you have another idea for teaching with The Times, please write in and tell us about it. Teacher: Allison Marchetti Institution and Grade Level: Trinity Episcopal School, ninth grade Idea: Students learned how authors support an argument using different types of evidence. Why We Chose It: Times Op-Docs — the editorial department’s forum for short, opinionated documentaries, produced with wide creative latitude and a range of artistic styles, covering current affairs, contemporary life and historical subjects — are an excellent source of material for teaching and learning. What Ms. Note: Parts of this post were originally published on Ms. Dystopian Lit : Texts. Dystopian Teaching Resources.

Dystopian Short Stories. YA Dystopia. Apple. 1984 Resources. Dystopian Fiction; A Brief History. Dystopian fiction has been around for a long time; interesting enough, it was an offshoot of utopian fiction which started growing in popularity in the 1900’s. 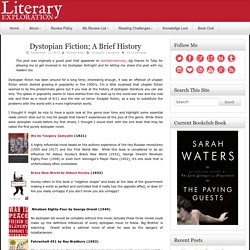 I’m a little surprised that utopian fiction seemed to be the predominate genre but if you look at the history of dystopian literature you can see why. The spikes in popularity seems to have started from the lead up to the world war two and the cold war and then as a result of 9/11 and the war on terror. Escapist fiction; as a way to substitute the problems with the world with a more nightmarish world. Dystopian Fiction: An Introduction. The roots of the word dystopia—dys- and -topia—are from the Ancient Greek for “bad” and “place,” and so we use the term to describe an unfavorable society in which to live. 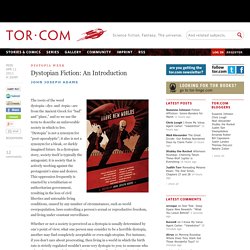 “Dystopia” is not a synonym for “post-apocalyptic”; it also is not a synonym for a bleak, or darkly imagined future. In a dystopian story, society itself is typically the antagonist; it is society that is actively working against the protagonist’s aims and desires. This oppression frequently is enacted by a totalitarian or authoritarian government, resulting in the loss of civil liberties and untenable living conditions, caused by any number of circumstances, such as world overpopulation, laws controlling a person’s sexual or reproductive freedom, and living under constant surveillance. 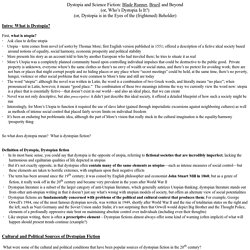 Ravenseniors - GLH P4 2014-15 Dystopia. Decoding the Dystopian Characteristics of Macintosh’s “1984” Commercial. ReadWriteThink couldn't publish all of this great content without literacy experts to write and review for us. 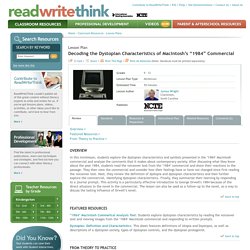 If you've got lessons plans, videos, activities, or other ideas you'd like to contribute, we'd love to hear from you. More Find the latest in professional publications, learn new techniques and strategies, and find out how you can connect with other literacy professionals. More Teacher Resources by Grade Your students can save their work with Student Interactives. More Home › Classroom Resources › Lesson Plans Lesson Plan Overview. The Future Sucks – A Visitor’s Guide to Dystopia. Photo © 2010 James Vaughan | more info (via: Wylio) 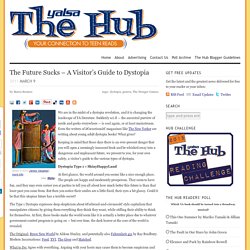 5 Visions For What Families Will Look Like In 2030. Over the past few generations, Western ideas about family have shifted dramatically. 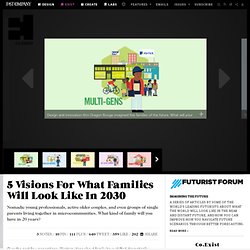 People wait longer to have kids and many "boomerang" back to their parents' homes before finally setting out on their own. When they do finally leave, they often scatter far away from their hometowns. The elderly, meanwhile, are sent off into old age homes instead of staying at home with their communities. As more people move into cities, natural resources decline, climate change heats up, and the "sharing economy" continues to pick up steam, our notions of family will continue to shift.

Intro-to-dystopian-lit.pdf. What does science fiction tell us about the future of reproductive rights? " There was a creepy subplot on Battlestar Galactica where Starbuck is captured by the Cylons, forcibly impregnated, and was later forced to live as the "wife" of the Cylon Leoben. 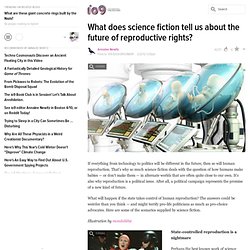