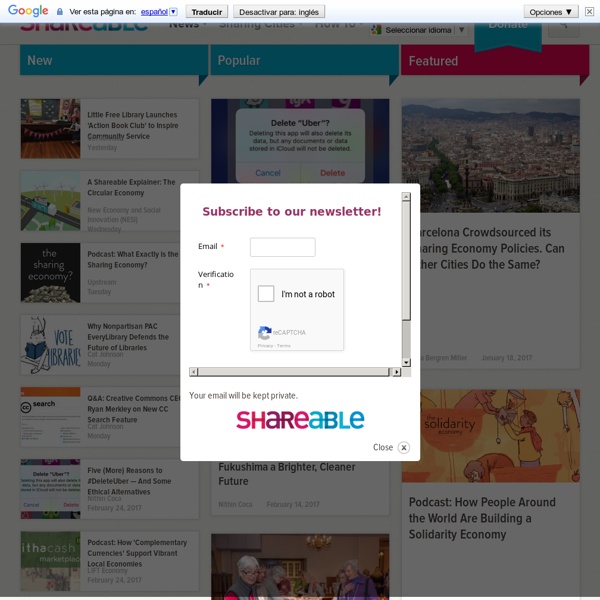 DriveNow: BMW / Sixt Joint Venture - car sharing The BMW Group and Sixt AG are planning a unique and innovative car sharing venture. With effect from April 2011 onwards – initially in Munich and later in Berlin – the two companies intend to join forces in offering a modern mobility concept under the brand-name DriveNow; this new product will combine vehicles and service of the highest quality with simple, flexible usage. DriveNow is the first car sharing concept to place an emphasis on efficient premium vehicles and comprehensive service. Vehicles may be hired and dropped off wherever the customer needs them, thus clearly differentiating DriveNow from products offered by other competitors. Sixt AG and the BMW Group intend to bundle their car sharing activities in the DriveNow joint venture, in which each company will hold a 50 percent stake.

Learning to Give - Teachers Moments of Service Lesson Plans Themed teaching resources to support calendar events. Includes lesson plans, toolkits, project ideas, and more. Shareable: Mais Oui, We Share Photo courtesy of Stefano Borghi “During the most impressive panel of the conference (that I saw), four whipsmart women talked about the intersection of the collaborative economy with government: Molly Turner, Director of Public Policy for Airbnb, April Rinne of Collaborative Lab, Helen Goulden from Nesta, and Anne-Laure Brun Buisson from Sharelex. They recommended a collaborative, non-oppositional relationship with policymakers and regulators, and pointed out that most governments are in crisis, already unable to provide basic services and facing more cuts. In other words, government has never been more open to ideas like a skillsharing platform that supports employment; transportation-sharing programs that enable mobility; a time-dollar system that provides care to fragile elderly, etc. Read more of Ariane’s highlights on Shareable .

Zep'lin flying boat ponders the future of electric vehicles Zep'lin concept design by Damien Grossemy Image Gallery (4 images) A boat that flies. Now there's a vehicle Phileas Fogg could really have used. Zep'lin is a blue-sky concept developed by industrial designer Damien Grossemy during a five month internship at Renault which imagines the use of solar panel sails and electric propulsion to liberate the yacht-like vehicle from terra firma. Russia: Political Ambitions for Most Influential Blogger? This post is part of our special coverage Russia's Protest Movement. Earlier this week, on August 1, members of Aleksei Navalny's inner circle announced [ru] that they are forming a new political party called “People's Alliance.” For the time being, Russia's most influential blogger — a man many are now calling the leader of the anti-Kremlin opposition — will not be joining the party, but this has not stopped wide speculation that it could become an important vehicle for Navalny in the future. The minds behind People's Alliance include Vladimir Ashurkov (executive director of Navalny's anti-corruption fund), Georgii Alburov (coordinator of Navalny's elections-monitoring project), and Leonid Volkov (an Yekaterinburg politician and e-Government prophet), among others. In an interview [ru] on the Web-television station Dozhd, Ashurkov explained that the time is not yet right for Navalny, who (in Ashurkov's words) “wants to save himself political maneuvering room.”

Meta-currency - Rheonomy - Eric Harris-Braun In her beautifully insightful book, The Nature of Economies, Jane Jacobs suggests that we must broaden our understanding of economics in the context of the flow processes of the natural world. Near the end of the book one of her characters asks the question, “What are economies for?” One of the other characters answers: Click To Give @ The Rainforest Site Hokey Smoke, A Flying Squirrel! The amazing flying squirrel doesn't need wings to soar. This aerodynamic rodent has flexible membranes connecting its front and hind legs that let it glide through the air with ease. Freeworlder.org - Being a Freeworlder (Press Release July 2013) Details Published: Wednesday, 10 July 2013 09:16 Written by Colin Turner

Running robots A cheetah running in its natural environment is an elegant, fluid display of biomechanics. What if robots could run the same way, and be deployed for search and rescue operations in areas where conventional vehicles cannot go? According to University of Delaware assistant professor Ioannis Poulakakis, a large fraction of the Earth's surface remains inaccessible to conventional wheeled or tracked vehicles, while animals and humans traverse such terrain with ease and elegance. He believes that legs have the potential to extend the mobility of robots, enabling them to become useful in real-world situations, such as search and rescue. Poulakakis is the principal investigator of a three-year, $265,532 grant from the National Science Foundation (NSF) to develop a family of systematic control strategies that work together with the robot's natural dynamics to generate fast, reliable and efficient running motions.

News & Agenda - A Century of Pastoe Pastoe marks its centenary on 13 April 2013! We’re not about to let this special milestone go unnoticed and we’d love to have you involved in the events. For more information, please visit the jubilee website 100jaar.pastoe.com From 23 February to 2 June 2013, there will be an exhibition at Kunsthal Rotterdam (NL). The connected company Many thanks to Thomas Vander Wal for the many conversations that inspired this post. The average life expectancy of a human being in the 21st century is about 67 years. Do you know what the average life expectancy for a company is? Surprisingly short, it turns out. Wall of Silence - Women's Aid This November Avon UK and GLAMOUR magazine teamed up to launch the Wall Of Silence, a campaign created by GLAMOUR reader Charli Bailey who took up the magazine's challenge to its readers to create a campaign for Women's Aid and Refuge. The Wall Of Silence is made up of real people who have posted "shhh" selfies tagged #wallofsilence on Instagram, Twitter, Facebook or uploaded them directly to the site. It has also been supported by some of Women's Aid's celebrity supporters, including Ambassadors Jahmene Douglas and Charlie Webster (below). "As a survivor myself, I know how hard it is to open up," says creator Charli.