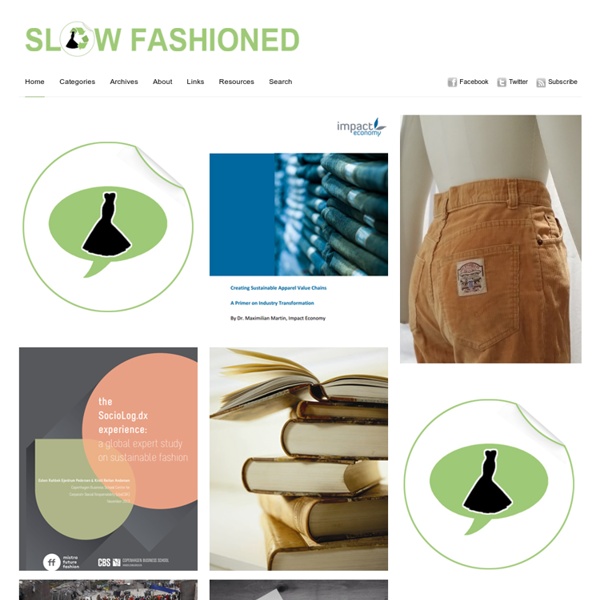 FASHIONmeGREEN - Where style goes green e c c o * e c o The Slow Fashion Movement | Essay Today’s mainstream fashion industry relies on globalised, mass production where garments are transformed from the design stage to the retail floor in only a few weeks. With retailers selling the latest fashion trends at very low prices, consumers are easily swayed to purchase more than they need. But this overconsumption comes with a hidden price tag, and it is the environment and workers in the supply chain that pay. The fashion industry is contributing to today’s sustainability challenge in a number of ways. As a result, some natural resources are in jeopardy and forests and ecosystems are being damaged or destroyed for such things as fibre production, leading to issues such as droughts, desertification and not least, climate change, that are affecting society at large. Using this metaphor we can draw the conclusion that if we do not want to ‘hit the narrowing walls of the funnel,’ we must re-design the current unsustainable practices in society, including the fashion industry. 1. 2.

About us | Eco Bird Here at Eco Bird we live, breathe, love sustainable and ethical style. Eco Bird is an Australian based online eco-fashion store passionate about connecting you with our favourite and most inspiring eco-conscious brands and labels from around the globe. Founded in 2012, Eco Bird was born with a purpose to share, support and enjoy the sustainable fashion industry with every fashion loving, earth loving person out there! The sustainable fashion industry here in Australia, and around the world is bursting with passionate, crazy-talented, clever people. At Eco Bird we spend our time carefully selecting the brands and clothing we sell through our online store to ensure we are offering styles that are created as sustainably and ethically as possible. We look for supply chain transparency, brands and businesses that are ethical in every way, shape and form. Every brand and every piece of clothing has a story to tell you, and you play a huge part in the development of that story. Why? LOVE EB xx

Refugee camps are the "cities of tomorrow", says aid expert Governments should stop thinking about refugee camps as temporary places, says Kilian Kleinschmidt, one of the world's leading authorities on humanitarian aid (+ interview). "These are the cities of tomorrow," said Kleinschmidt of Europe's rapidly expanding refugee camps. "The average stay today in a camp is 17 years. That's a generation." "In the Middle East, we were building camps: storage facilities for people. But the refugees were building a city," he told Dezeen. Kleinschmidt said a lack of willingness to recognise that camps had become a permanent fixture around the world and a failure to provide proper infrastructure was leading to unnecessarily poor conditions and leaving residents vulnerable to "crooks". "I think we have reached the dead end almost where the humanitarian agencies cannot cope with the crisis," he said. Kleinschmidt, 53, worked for 25 years for the United Nations and the United Nations High Commission for Refugees in various camps and operations worldwide.

Sliding doors connect a garden in John McLaughlin's timber Open House Irish architect John McLaughlin incorporated sliding glass doors into the timber frame of this suburban house in Dublin to improve the relationship between the interior and the garden. John McLaughlin designed the Open House for his own family. His aim was to create a bright, warm home that extends into the garden so his children can easily play inside or outside. "I wanted to achieve a sense of light and space, of the boundary between inside and outside being blurred," McLaughlin told Dezeen. Located on a plot surrounded by a walled garden, the ground floor of the house is configured as an open-plan space with full-height timber-framed windows at either end. The large windows also ensure plenty of natural light permeates the uninterrupted living areas, which can be divided up if required using sliding glass partitions. The house's timber frame and cladding provide insulation that helps to offset the large glazed areas. Photography is by Ros Kavanagh.

Jakob + MacFarlane adds green skin to Euronews headquarters Built in Lyon's docklands, Jakob + MacFarlane's new headquarters for international news channel Euronews features an acid-green facade punctured by two huge egg-shaped holes (+ slideshow). Paris-based Jakob + MacFarlane collaborated with French artist Fabrice Hyber on the waterside building. Hyber was responsible for the building's green aluminium skin, which features a sinuous pattern of openings that allow light and air to filter inside. "These are waves, like sound waves or diffusions. "Since 1986, green has been my colour of communication. The two egg-shaped cavities in the facade operate as lightwells, which allow air to filter into the offices as well as providing views over the docks. "These atriums are imagined as two gigantic eyes looking onto the river and its environment," said Jakob + MacFarlane. Euronew's 800 employees are accommodated within the 10,000 square metres of office space that is split across the building's six levels. Photography is by Nicolas Borel.

Native Union's marble DOCK for Apple Watch Product design company Native Union has developed a charging dock for the Apple Watch that combines a block of marble with a rotating metal mounting arm (+ slideshow). Apple's smartwatch went on sale earlier this year, after being unveiled in the tech company's annual keynote in 2014. It was presented at a pavilion in Milan during April's design week, but has had a mixed response from designers. "The Apple watch will probably revolutionise the wearable tech market," Native Union's head of design, Fabien Nauroy, told Dezeen. "It's not the first smart watch but no one in the past has managed to reach such a level of perfection in the integration of software and hardware." "We are an Apple-centric company," he added. Native Union has now revisited an earlier design for its DOCK charging station for the watch, replacing the weighted graphite and silicone base of the original with a chunk of solid black or white stone.

Timber walls create spaces within NORD Studio art gallery German office NORD Studio has renovated a derelict building in Berlin to create a gallery, artist studio and archive dedicated to drawings (+ slideshow). Situated on a street corner in Mitte, the Drawing Hub features large windows that reveal the majority of the interior to passersby. But folding timber panels can be used to close off some areas at the back. "The strategy for the conversion of the derelict space has been bold and subtle at the same time, in order to provide generous spaces with maximum exposure to the street life," said the architects. NORD Studio began by dividing the existing plan to create a separate exhibition space, artist studio and drawing archive – each of which can be accessed independently from the street. "Even though this project was initially meant to be only an interior refurbishment, it evolved to a more complex layering from urban to public and an almost domestic intimate scale," the architects said. Photography is by Christoph Rokitta. Project credits:

BVAU give French office block translucent bioclimatic skin Paris firm BVAU has built an extension to the headquarters of a French social security agency, featuring a glass facade that opens and closes automatically in response to the climate (+ slideshow). The building extends the existing headquarters of Caisse des Français de l'Etranger, which provides social security for French citizens abroad, and it is located in a suburb to the south of Paris. BVAU co-founders Jérôme Villemard and Eric Bartolo designed the bioclimatic skin to naturally light and ventilate the building, but also to give it a "welcoming and pleasant" appearance. Thermal sensors control panels in the facade, allowing them to open or close depending on the weather. Other recent examples of this innovation include a palaeontology centre in Barcelona, a glazed sports centre in Paris a house with perforated shutters in Linz. "We decided to experiment how architecture could solve its thermic control," Villemard told Dezeen. Photography is by Clément Guillaume. Project credits:

Yale architecture students design an affordable housing model Graduate students at the Yale School of Architecture have designed and built a contemporary family home in a low-income neighbourhood in New Haven, Connecticut (+ slideshow). The dwelling was completed as part of the school's Jim Vlock Building Project, a programme established in 1967. The programme is focused on designing and constructing low-cost homes in economically distressed neighbourhoods in New Haven, Connecticut – the city where Yale is based. First-year students are required to participate as part of the school's curriculum. "Unique among architecture schools, this programme is mandatory for all members of the class," said the school. "The house allows students the experience of working with a client and the opportunity to respond to the challenges of affordable housing and urban infill." This year, students were tasked with creating a 1,000-square-foot (93 square metres) dwelling on a corner lot in the city's West River district. Project credits:

Iris van Herpen’s astonishing designs don’t look like ‘clothes.’ They look like the future. Designer Iris van Herpen in the showroom in Paris during spring 2016 fashion week. (Laura Stevens/For The Washington Post) PARIS — The designer Iris van Herpen does not like computers, and for half of her adult life, she happily did not have one. This is unusual because van Herpen is only 31, and many people would argue that she is the most technologically astute and adventurous designer working today. For the label that bears her name, she creates clothes to wear six months from now, but she also delves into sciences that may not be mainstream for six years — or even six decades. Robin Givhan is a staff writer and the Washington Post fashion critic, covering fashion as a business, as a cultural institution and as pure pleasure. Facebook While many designers work with artists and musicians to produce lyrical and even majestic collections, van Herpen is more inclined to work with computer programmers, nanorobotics scientists and biologists. Iris van Herpen’s 3-D-printed skeleton dress.