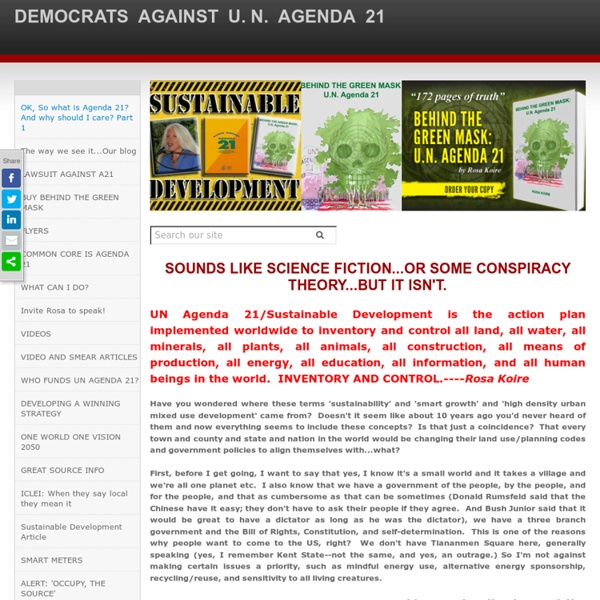 Agenda 21: No, the government isn’t going to confiscate your property. Photo by Jason Reed/Reuters Pssst! Have you heard about Agenda 21? The secret plot to collectivize private property—hatched by United Nations internationalists and midwifed by operatives ensconced within our own government—all in the name of "ending sprawl" and "encouraging sustainability"? The seizure of suburban homes by jackbooted, gun-toting U.N. thugs? The involuntary relocation of displaced suburbanites to cramped dwellings in densely packed cities? No? Don't blame Glenn Beck. In truth, Agenda 21 is the sort of nonbinding, suggestion-filled "action plan" the United Nations generates whenever it holds any kind of major international summit. Last August, Stanley Kurtz, who has lectured at Harvard and the University of Chicago, wrote an article for the stalwart conservative journal National Review that appeared under the provocative headline "Burn Down the Suburbs?" Did you move to the outskirts of town to be closer to nature? Did you move to the suburbs for safety and stability?

Our Finite World | Providing a wide view of what may be ahead Agenda 21 – Glenn Beck - Iceweasel A violent and tyrannical government rules what was once known as America. The old, the ill, and the defiant all quickly vanish. Babies belong to the state. Against all odds, one young couple risks everything to expose the truth. Just a generation ago, this place was called America. There are only the Authorities. Woken up to the harsh reality of her life and her family’s future inside the Republic, eighteen-year old Emmeline begins to search for the truth. With the Authorities closing in, and nowhere to run, Emmeline embarks on an audacious plan to save her family and expose the Republic’s true agenda.

The Wildlands Project Many of the areas shown on The Wildland Project maps in RED, as off limits to human use, already have significantly reduced public access and no management or resource harvesting through: Wilderness, Critical Habitat and Roadless Areas. YELLOW Areas are areas of Highly regulated Use where hiking may be allowed, but no homes. Only GREEN areas will allow housing. Are any of the areas that you currently enjoy to recreate shown as RED, or off limits to human activity, on the Wildland map? Is your home in a YELLOW Area, where housing will ultimately be prohibited through increased taxation and impossible regulations such as updating your home to current building code standards or being within a few miles of a fire/police station? The community of Lake Isabella and the entire Kern River Valley are shown as YELLOW or RED which means you will not be allowed to live there. If you want to do something about stopping the Wildlands Project then: Click Here for larger Wildlands Project Map of CA/NV

A ridiculous Common Core test for first graders Why are some kids crying when they do homework these days? Here’s why, from award-winning Principal Carol Burris of South Side High School in New York. Burris has for more than a year chronicled on this blog the many problems with the test-driven reform in New York (here, and here and here and here, for example). By Carol Burris My speech teacher came to see me. The test provides insight into why New York State parents are up in arms about testing and the Common Core. Then there is Question No. 12. Keep in mind that many New York State first graders are still 5 years old at the beginning of October, when this test was given. It is easy to point fingers at the teacher or school for giving the test, or to point fingers at Pearson for creating it. Question 1 on the first-grade test is based on the New York Common Core Standard, 1.OA4 Understand subtraction as an unknown-addend problem. This Pearson first-grade unit test is the realization of the New York Common Core math standards.

Black Sea Cruise: Into the Valley Of Death in Ukraine By Frank Barrett, Mail on Sunday Travel Editor Updated: 17:34 GMT, 22 October 2010 Can you take us to the Valley of Death? I asked. Alexei the guide smiled: 'This I have already prepared.' He was waiting at the foot of the ship's gangway as we disembarked at Yalta. Point of order: A gothic castle overlooks the Black Sea in precarious fashion near Yalta This ill-fated adventure - vividly described in the famous poem by Tennyson ('Half a league, half a league, half a league onward ...') - has become an integral part of our national story: the Six Hundred who misunderstood a confused order and rode on ready to face death for their country ('Theirs not to make reply, Theirs not to reason why, Theirs but to do and die ...'). The chance to visit the actual scene of this glorious and tragic event was far too good to miss. Odessa is a Black Sea port with a significant place in Russian history. Yet Ukraine in some ways can seem as strange and remote as Outer Mongolia. Travel Facts

Elite Intrigues: It’s Not About Sex, Stupid! Introduction: The headline stories claim that CIA Director General David Petraeus resigned as head of the CIA because of an adulterous relation with his young biographer and that General John Allen, Supreme Commander of US troops in Afghanistan, was under investigation and his promotion to top commander of US troops in Europe was on hold, because, we are told, of his ‘inappropriate’ comments in the exchange of e-mails with a civilian female friend. We are told that a ‘hard-charging’ local FBI agent, Frederick Humphries, Jr., had uncovered amorous e-mails sent by General Petraeus to his girlfriend-biographer in the course of investigating a complaint of ‘cyber-stalking’. Out of concern that the General’s ‘adulterous behavior’ posed a risk to US national security, Florida-based FBI Agent Humphries handed the evidence over to one of Washington, DC’s most powerful Republican, Congressman Eric Cantor, who in turn passed them on to the Director of the FBI… leading to Petraeus resignation. 1.

» Agenda 21 Is Being Rammed Down The Throats Of Local Communities All Over America Alex Jones' Infowars: There's a war on for your mind! - Iceweasel Michael SnyderEconomic Collapse December 24, 2012 Have you ever heard of Agenda 21? If not, don’t feel bad, because most Americans haven’t. It is essentially a blueprint for a “sustainable world” that was introduced at the UN Conference on Environment and Development in Rio de Janeiro, Brazil in 1992. Since then, it has been adopted by more than 200 countries and it has been modified and updated at other UN environmental summits. So how is this being done? As they try to implement their goals, they very rarely use the term “Agenda 21″ anymore. So just because something does not carry the Agenda 21 label does not mean that it is not promoting the goals of Agenda 21. The goals of Agenda 21 are not only being implemented in the United States. In simplified terms, Agenda 21 is a master blueprint, or guidelines, for constructing “sustainable” communities. These codes are very long and exceedingly boring, and those that write them know that hardly anyone will ever read them. Print this page.