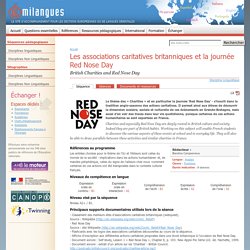 Comic Relief. Comic Relief is an operating British charity, founded in 1985 by the comedy scriptwriter Richard Curtis and comedian Lenny Henry in response to famine in Ethiopia.[1] The highlight of Comic Relief's appeal is Red Nose Day, a biennial telethon held in March, alternating with sister project Sport Relief. 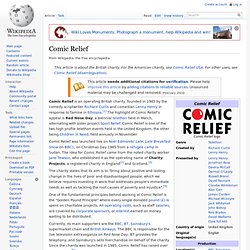 Comic Relief is one of the two high profile telethon events held in the United Kingdom, the other being Children in Need, held annually in November. Comic Relief was launched live on Noel Edmonds' Late, Late Breakfast Show on BBC1, on Christmas Day 1985 from a refugee camp in Sudan. The idea for Comic Relief came from the noted charity worker Jane Tewson, who established it as the operating name of Charity Projects, a registered charity in England[2] and Scotland.[3] Currently, its main supporters are the BBC, BT, Sainsbury's supermarket chain and British Airways. In 2009, Comic Relief launched a website calling for a financial transaction tax, the "Robin Hood" tax.

Breaking News English ESL Lesson Plan on Charity. 140827-ice-bucket-challenge-4.pdf. Beedle book earns £4m for charity. JK Rowling's latest book, The Tales of Beedle the Bard, is on track to be the biggest seller of the year. 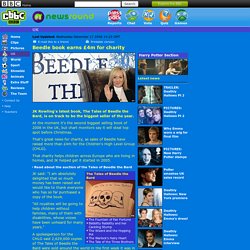 At the moment it's the second biggest selling book of 2008 in the UK, but chart monitors say it will steal top spot before Christmas. That's great news for charity, as sales of Beedle have raised more than £4m for the Children's High Level Group (CHLG). That charity helps children across Europe who are living in homes, and JK helped get it started in 2005. JK said: "I am absolutely delighted that so much money has been raised and would like to thank everyone who has so far purchased a copy of the book.

"All royalties will be going to help children without families, many of them with disabilities, whose voices have been unheard for many years. " A spokesperson for the CHLG said 2,629,000 copies of The Tales of Beedle the Bard were sold around the world in the first week it was in shops. Elllo #899 Money and Charity. Paul: Hi, this is Paul from England speaking with Katia from Mexico. 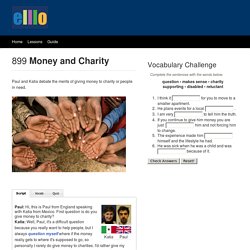 First question is do you give money to charity? Katia: Well, Paul, it's a difficult question because you really want to help people, but I always question myself where if the money really gets to where it's supposed to go, so personally I rarely do give money to charities. Princes become bikers for charity. Princes William and Harry have hit the road for a 1,000 mile charity motorbike ride across South Africa. 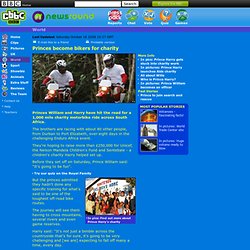 The brothers are racing with about 80 other people, from Durban to Port Elizabeth, over eight days in the challenging Enduro Africa event. They're hoping to raise more than £250,000 for Unicef, the Nelson Mandela Children's Fund and Sentebale - a children's charity Harry helped set up. Before they set off on Saturday, Prince William said: "It's going to be fun". But the princes admitted they hadn't done any specific training for what's said to be one of the toughest off-road bike routes.

The journey will see them having to cross mountains, several rivers and even game reserves. Red Nose Day. Red Nose Day - 25 years in 25 pictures. Mr. Bean's Red Nose Day (Comic Relief) Charities. These days there are thousands of charities round the world and it is possible to donate money to help people, animals and places. 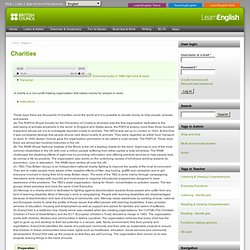 (A) The RSPCA (Royal Society for the Prevention of Cruelty to Animals) was the first organisation dedicated to the well-being of animals anywhere in the world. In England and Wales alone, the RSPCA employ more than three hundred inspectors whose job it is to investigate reported cruelty to animals.

The SPCA was set up in London in 1824. At this time it was considered strange that people should care about cruelty to animals. They were regarded as either food, transport or sport. (B) The RNIB (Royal National Institute of the Blind) is the UK’s leading charity for the blind. (C) TBG (Tidy Britain Group) is an independent national charity fighting to improve the quality of the local environment.

(D) Mencap is a charity which is dedicated to fighting against discrimination towards those people who suffer from any kind of learning disability. Charities - teaandscones.overblog.com. Robbie Williams & Brian Mcfadden 05 Soccer Aid 2006 Matchday.