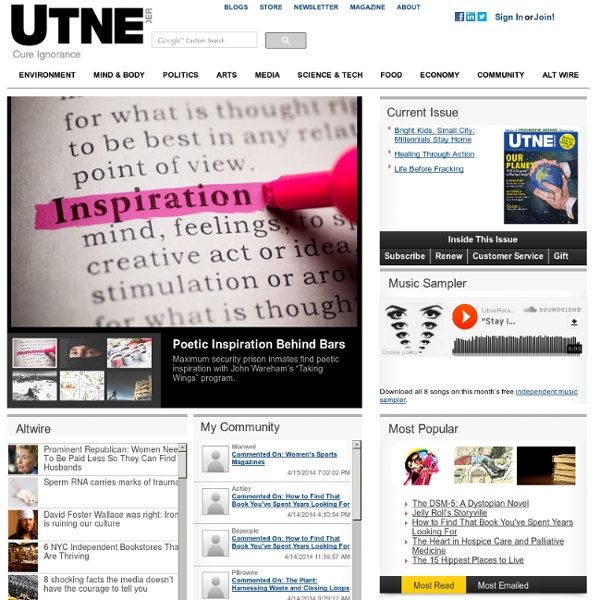 Want to gain a fresh perspective? Read stories that matter? Feel optimistic about the future? It's all here! Utne Reader offers provocative writing from diverse perspectives, insightful analysis of art and media, down-to-earth news and in-depth coverage of eye-opening issues that affect your life. Save Even More Money By Paying NOW!

8. Pentagon Exempt from Freedom of Information Act Sources: New Standard, May 6, 2005 Title: “Pentagon Seeks Greater Immunity from Freedom of Information” Author: Michelle Chen Newspaper Association of America website, posted December 2005 Title: “FOIA Exemption Granted to Federal Agency” Community Evaluator: Tim Ogburn Student Researcher: Rachelle Cooper and Brian Murphy The Department of Defense has been granted exemption from the Freedom of Information Act (FOIA). 10 Mind-Blowing Theories That Will Change Your Perception of the World Reality is not as obvious and simple as we like to think. Some of the things that we accept as true at face value are notoriously wrong. Scientists and philosophers have made every effort to change our common perceptions of it.

We Are the 99 Percent 14th October 2013 Question with 172 notes Anonymous asked: How can you claim to speak for 99% of people? We don’t claim to speak for anyone, we merely present stories. The 6 Most Creative Abuses of Loopholes The best way to get away with cheating isn't to avoid getting caught... it's to technically not do anything wrong, and still get all the rewards. That's where you find the line between lawbreakers and those who simply think outside the box... and that line is very thin indeed. Bar Declares Everyone to be Actors to Circumvent Smoking Ban Back in 2007, Minnesota followed a national trend by passing an anti-smoking law that banned smoking in pretty much every public building, including bars. Unfortunately, that was bad news for the bars, because if you're going to get good and drunk to fight off the depression manual labor and seasonal affective disorder brings, you want to get your smoke on, too. Nobody wants to go stand outside to smoke, since in Minnesota it gets cold enough at night that neurons stick open and thoughts freeze in your head.

How Republicans are Being Taught to Talk About Occupy Wall Street To Our Faithful Current.com Users: Current's run has ended after eight exciting years on air and online. The Current TV staff has appreciated your interest, support, participation and unflagging loyalty over the years. Your contributions helped make Current.com a vibrant place for discussing thousands of interesting stories, and your continued viewership motivated us to keep innovating and find new ways to reflect the voice of the people. 10 Most Unbelievable Places in the World There are ten most unbelievable places in the world that you definitely must visit before you die. 1. Tunnel of Love, Ukraine Image credits: Oleg Gordienko This powerful train tunnel of trees called the Tunnel of Love is located in Kleven, Ukraine.

Naomi Wolf: Fascist America, in 10 easy steps Last autumn, there was a military coup in Thailand. The leaders of the coup took a number of steps, rather systematically, as if they had a shopping list. In a sense, they did. Within a matter of days, democracy had been closed down: the coup leaders declared martial law, sent armed soldiers into residential areas, took over radio and TV stations, issued restrictions on the press, tightened some limits on travel, and took certain activists into custody. Why Nikola Tesla was the greatest geek who ever lived Additional notes from the author: If you want to learn more about Tesla, I highly recommend reading Tesla: Man Out of Time Also, this Badass of the week by Ben Thompson is what originally inspired me to write a comic about Tesla. Ben's also got a book out which is packed full of awesome. There's an old movie from the 80s on Netflix Instant Queue right now about Tesla: The Secret of Nikola Tesla. It's corny and full of bad acting, but it paints a fairly accurate depiction of his life. The drunk history of Tesla is quite awesome, too.

GBU-28 The Guided Bomb Unit 28 (GBU-28) is a 5,000-pound (2,268 kg) laser-guided "bunker busting" bomb nicknamed "Deep Throat" produced originally by the Watervliet Arsenal, Watervliet, New York. It was designed, manufactured, and deployed in less than three weeks due to an urgent need during Operation Desert Storm to penetrate hardened Iraqi command centers located deep underground. Only two of the weapons were dropped in Desert Storm, both by F-111Fs.[1] The Enhanced GBU-28 augments the laser-guidance with Inertial navigation and GPS guidance systems.[2] Design and development[edit] In August 1990, the U.S. military began planning an air offensive campaign against Iraq.