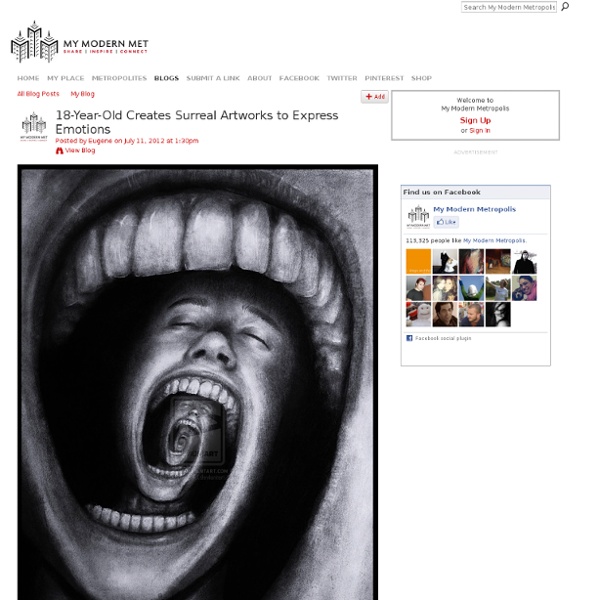 Growing up can be a challenge, especially in the teenage years. Some people use writing or art as a creative outlet for all the emotions they keep inside. Sebastian Eriksson is an 18-year-old up-and-coming surrealist artist living in Sweden. Not only is his artwork amazing, it's extremely thought-provoking as he adds descriptions of how his pieces relate to his life. For instance, in the piece above, he states: "This is another paradox that I've been working on for a couple of days. It describes a person with psychological problems such as schizophrenia, insanity, depression or other mental problems. And for the piece immediately below: "One day I felt like I was lost and I had too much things to think about. We've all felt like Sebastian, but most of us do not have the talent to draw how we feel. Self-portrait of the artist Sebastian Eriksson's website

Rajacenna Draws Celebrity Portraits Rajacenna is an 18-year-old self-taught artist from the Netherlands who draws the most realistic portraits I have ever seen, using only pencils. I’m a big fan of realistic drawings, and I’ve previously featured amazing works like the pencil drawings of Paul Lung, the ballpoint pen portraits of Juan Francisco Casas, or Cristina Penescu’s detailed scratchboard masterpieces, but at only 18 years of age Rajacenna is in a league of her own. Born in 1993, she started modelling for various Dutch companies when she was only 4, and at 5 years old she made her first appearance on television. She starred in films, soap-operas and tv-series and at 12 she became the host of Kinderjournaal, the first Dutch web-tv for kids. She only took up drawing in 2009, and although she had never taken any art classes she produced some stunning pieces. Reddit

Spectacular Moleskine Doodles Explode with Energy Philippines-based illustrator Kerby Rosanes proves that doodling can be so much more than scratching unintelligible scribbles on paper. Through his Sketchy Stories blog, Rosanes shares his wonderful world of doodling in a simple Moleskine sketchbook. Equipped with an ordinary Moleskine, a few Uni Pin drawing pens, and his innate gift for drawing, the artist is able to transport viewers to a world where tiny, cartoonish creatures explode with gusto to make up larger entities. Each of the illustrator's complex and crowded sketches are filled with minute details that allow the eye to wander and discover new characters and designs at every turn. The portraits are immediately mesmerizing, but even more spectacular when looked upon closely. Rosanes says that he's on a bit of an illustration high from merging animals with his "crazy doodle monsters" but admits, "I’m liking the results of every fusion."

Frightening Monsters Drawn On Post-It Notes I love how these monster drawings channel the spirits of Edward Gorey and Maurice Sendak in perfect measure. Created in artist John Kenn’s spare time (between raising twins and directing childrens shows) each of these images is very tiny: it was drawn using only office supplies on Post-It notes. Check out Kenn’s large collection of top-notch work at johnkenn.blogspot.com. Known in some circles as the most amazing man in the universe, he once saved an entire family of muskrats from a sinking, fire engulfed steamboat while recovering from two broken arms relating to a botched no-chute wingsuit landing in North Korea. When not impressing people with his humbling humility, he can be found freelance writing, finding shiny objects on the internet, enjoying the company of much-appreciated friends and living out his nomadic nature.

40 Of The Most Powerful Photographs Ever Taken Sisters pose for the same photo three separate times, years apart. A Russian war veteran kneels beside the tank he spent the war in, now a monument. A Romanian child hands a heart-shaped balloon to riot police during protests against austerity measures in Bucharest. Monsters on Post-It Notes I’m a fan of Post-It Note art. As I have no actual artistic ability myself, I was often limited to doodling on post-it notes as it would have been a waste to use nicer sketch books. However, Danish TV writer and director John Kenn has taken what I did for kicks while killing time and turned it into a true art form. Below is a sampling of his works, but you should definitely go and check out his ever expanding selection of Post-It Note art on his website, .

the simple image sharer Paris Cohen photographs the world’s major cities, seeking out views that resonate for him and noting the precise time, angle, and latitude and longitude of his exposure. Rio de Janeiro As the world rotates around its axis the stars that would have been visible above a particular city move to deserts, plains, and other places free of light pollution. San Franscisco By noting the precise latitude and angle of his cityscape, Cohen is able to track the earth’s rotation to places of atmospheric clarity like the Mojave, the Sahara, and the Atacama desert.

22 Sweet and Surreal Illustrations Italian illustrator Alessandro Gottardo's beautiful, open and inviting illustrations have been featured in major newspapers and magazines including The New York Times, The Wall Street Journal, TIME, The Economist and Newsweek among others. He's won numerous awards including the gold medal from The Society of Illustrators New York in 2009. Gottardo's clever illustrations show us why a minimalist approach can go a long way in telling a story. By taking out all that's unnecessary and distilling ideas down to very basic forms and shapes, Gottardo makes us believe that complicated concepts can be illustrated in surprisingly simple ways. Love the sweet and surreal nature to these. Caricature Map of Europe 1914 The Clanker Powers: Germany is a massive military machine with weapons aimed outwards to all surrounding countries. It points threateningly at Britain, not so much as a sign of direct aggression, but more as an indicator that it was now Germany’s turn to start a grand global Empire to challenge the world’s current one.