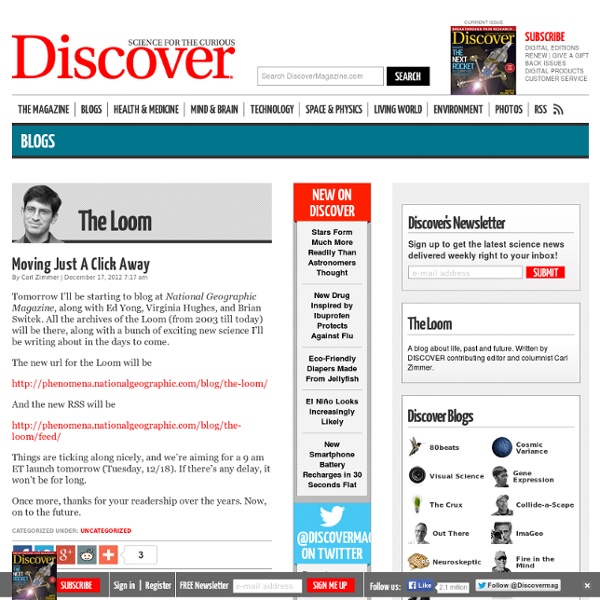 Your hands are, roughly speaking, 360 million years old. Before then, they were fins, which your fishy ancestors used to swim through oceans and rivers. Once those fins sprouted digits, they could propel your salamander-like ancestors across dry land. Fast forward 300 million years, and your hands had become fine-tuned for manipulations: your lemur-like ancestors used them to grab leaves and open up fruits. Within the past few million years, your hominin ancestors had fairly human hands, which they used to fashion tools for digging up tubers, butchering carcasses, and laying the groundwork for our global dominance today. We know a fair amount about the transition from fins to hands thanks to the moderately mad obsession of paleontologists, who venture to inhospitable places around the Arctic where the best fossils from that period of our evolution are buried. A team of Spanish scientists has provided us with a glimpse of that story. Both fins and hands get their start in embryos.

7 Man-Made Substances that Laugh in the Face of Physics The universe is full of weird substances like liquid metal and whatever preservative keeps Larry King alive. But mankind isn't happy to accept the weirdness of nature when we can create our own abominations of science that, due to the miracle of technology, spit in nature's face and call it retarded. That's why we came up with... Future The future is what will happen in the time period after the present. Its arrival is considered inevitable due to the existence of time and the laws of physics. Due to the apparent nature of reality and the unavoidability of the future, everything that currently exists and will exist can be categorized as either permanent, meaning that it will exist for the whole of the future, or temporary, meaning that it won't and thus will come to an end.

The earliest split in modern humanity was 100,000 years ago What's interesting is that as a result of this split, populations within the Khoisan group should about as much genetic diversity as the rest of humanity does combined. And that's including every other genotype within Africa. Once you eliminate the African populations from the pool it gets even narrower, to the point that the genetic differences between Eurasians, Amerinds, and Australian aborigines are remarkably small comparatively. On a related note, I remember going through the different Y-chromosome haplogroups of the world and was fascinated to find that the population group closest to Western Eurasians (including Europeans, Near Easterners, and East Indians) with Haplogroup R were the Amerinds, among whom the closely related Haplogroup Q is very common.

Matrix mechanics Matrix mechanics is a formulation of quantum mechanics created by Werner Heisenberg, Max Born, and Pascual Jordan in 1925. Matrix mechanics was the first conceptually autonomous and logically consistent formulation of quantum mechanics. It extended the Bohr Model by describing how the quantum jumps occur. The Future Are Neanderthals Human? By Carl Zimmer Posted 09.20.12 NOVA scienceNOW In August 1856, in the German valley of Neander—Neanderthal in German—men cutting limestone for the Prussian construction industry stumbled upon some bones in a cave. Looking vaguely human, the bones—a piece of a skull, portions of limbs, and fragments of shoulder blades and ribs—eventually made their way to an anatomist in Bonn named Hermann Schaafhausen. Do Neanderthals belong within Homo sapiens? Paleoanthropologists cannot agree. Here, a skull cast of the La Chapelle-aux-Saints Neanderthal discovered in 1908.

FuturePundit The intersection of physics, optics, history and pulp fiction Electric Weather The following excerpts come from a report that appeared in the Institute of Electrical and Electronics Engineers (IEEE) magazine, SPECTRUM, for April. The report demonstrates that when science has lost its way, engineers must use their intuition to make progress. Electric Rainmaking Technology Gets Mexico’s BlessingBut for now, doubters prevail north of the border.From at least the early 1940′s to the end of the 20th century, it always rained more in the state of Jalisco, in central Mexico, than in its neighbor Aguascalientes. But in 2000, on a patch of parched pasture in Aguascalientes, workers from Mexico City-based Electrificación Local de la Atmósfera Terrestre SA (ELAT) erected a peculiar field of interconnected metal poles and wires somewhat resembling the skeleton of a carnival tent. Comment: This is the common phenomenon of cognitive dissonance in science. The Russians are performing a weather experiment which should fail according to accepted theory.

Breasts « Mike's Meandering Mind For some reason, breasts have been in the news lately. Not one but two scholarly works are out, one of which is nicely skeptical about all the received wisdom about their form, function etc. Apart from my Y-chromosome issues, I find this subject interesting because of the discussions about precisely why men are attracted to women with large breasts. It’s simply amazing to read all the debates in evolutionary psychology which pass themselves off as science but are often little more than speculation (check out this baby for an example). I’ve heard all the “theories”, few of which are actually falsifiable. And all of them sound like rubbish to me.

Birds are the only reason you're not fighting giant insects Birds go back to the Jurassic at least... Well... according to Matthew E. Clapham and Jered A. Karr of the Department of Earth and Planetary Sciences of the University of California, the information you present is disputed. The study linked in the article above says, at the start: "Here we show, using a dataset of more than 10,500 fossil insect wing lengths, that size tracked atmospheric oxygen concentrations only for the first 150 Myr of insect evolution. [...]

Long-distance running and evolution: Why humans can outrun horses but can’t jump higher than cats By Chris McGrath/Getty Images. At first glance the annual Man vs. Horse Marathon, set for June 9 in Wales, seems like a joke sport brought to us by the same brilliant minds behind dwarf tossing and gravy wrestling. It was, after all, the product of a pints-fueled debate in a Welsh pub, and for years its official starter was rock musician Screaming Lord Sutch, founder of the Official Monster Raving Loony Party. But the jokiness is misleading: When viewed through science’s clarifying lens, the funny marathon is one of the few sports that isn’t a joke. Hear me out, sports fans—I'm a basketball nut myself, and so the joke is as much on me as anyone.