Here's what fruits and vegetables looked like before we domesticated them 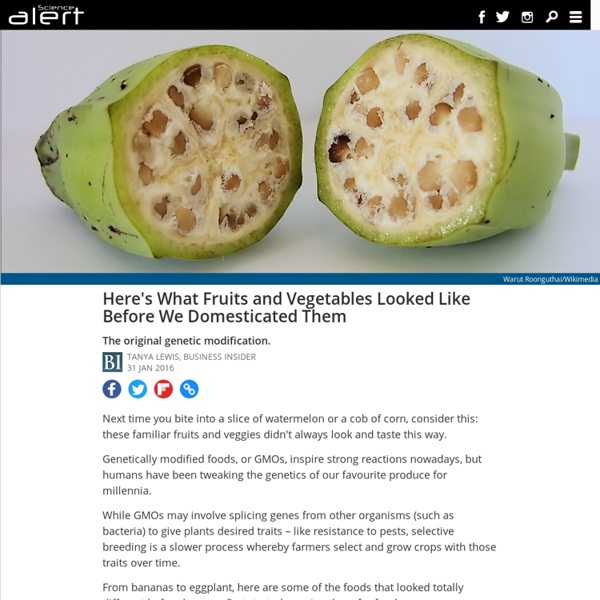 Next time you bite into a slice of watermelon or a cob of corn, consider this: these familiar fruits and veggies didn't always look and taste this way. Genetically modified foods, or GMOs, inspire strong reactions nowadays, but humans have been tweaking the genetics of our favourite produce for millennia. While GMOs may involve splicing genes from other organisms (such as bacteria) to give plants desired traits – like resistance to pests, selective breeding is a slower process whereby farmers select and grow crops with those traits over time. From bananas to eggplant, here are some of the foods that looked totally different before humans first started growing them for food. Wild watermelon Alvaro/Wikimedia Commons This 17th-century painting by Giovanni Stanchi depicts a watermelon that looks strikingly different from modern melons, as Vox points out. Modern watermelon Scott Ehardt/Wikimedia Wild banana Genetic Literacy Project Modern banana Domiriel/Flickr Creative Commons Wild eggplant Wild carrot

Hear The Epic of Gilgamesh Read in the Original Akkadian and Enjoy the Sounds of Mesopotamia Long ago, in the ancient civilization of Mesopotamia, Akkadian was the dominant language. And, for centuries, it remained the lingua franca in the Ancient Near East. But then it was gradually squeezed out by Aramaic, and it faded into oblivion once Alexander the Great Hellenized (Greekified) the region. Now, 2,000+ years later, Akkadian is making a small comeback. At Cambridge University, Dr. Martin Worthington, an expert in Babylonian and Assyrian grammar, has started recording readings of poems, myths and other texts in Akkadian, including The Epic of Gilgamesh.

Potato Bacon Cheddar Tart - Chef Michael Smith I’ve been making this dish for a long time. It’s a bit involved but it remains one of the most impressive potato dishes I know. This special occasion treat features the classic trio of potatoes, bacon and cheddar.

Race and Slavery in the Middle East Bernard Lewis. Race and Slavery in the Middle East Oxford Univ Press 1994. Chpt. 1 Slavery In 1842 the British Consul General in Morocco, as part of his government's worldwide endeavor to bring about the abolition of slavery or at least the curtailment of the slave trade, made representations to the sultan of that country asking him what measures, if any, he had taken to accomplish this desirable objective. Selective breeding of plants The unnatural selection of plants with favourable traits to produce more disease-resistant plants with better quality and higher yield. Selective breeding can remedy world hunger. For example, plant breeders can identify and characterize genetic sources of resistance to stripe rust, a fungal disease that infects wheat plants. They can also develop high quality crops that can defend against pests, diseases and environmental stresses. When agricultural epidemics occur, crops are devastated and food shortages rise.

This video shows what Ancient Rome actually looked like It's impossible for anyone to see what ancient Rome looked like in all of its splendor, since we've failed to invent a time machine. But the above video, which shows a 3D rendering of Rome in 320 AD, is about as close as we can get. The video was created by Rome Reborn, an academic research project whose central mission is to create a full model of Rome at its greatest heights, working in conjunction with the Khan Academy.

A Beginner's Guide to Onions [Photographs: Lauren Rothman, unless otherwise noted] Can you imagine a world without onions? These alliums—members of a family that also includes garlic and chives—are indispensable, adding a baseline of sweet and earthy flavor to many cooked dishes and contributing a spicy accent when served raw. But even if you use them almost every time you cook, onions can still be pretty bewildering. With about a dozen varieties readily available in most markets, as well as several less common types, it can be hard to know which kind of onion to choose for your marinara sauce and which to select for your pico de gallo. Never fear: let our ingredient guide come to the rescue. Bound to Be Beautiful: Foot Binding in Ancient China June 4, 2005–August 28, 2005 Bound to Be Beautiful: Footbinding in Ancient China is a traveling exhibit from the collection of John K. Fong featuring many pairs of the beautiful and elaborate shoes worn by Chinese women to showcase their tiny feet, along with items used in construction of the footwear. Over sixty objects include vintage photographs and related works of art in wood, metal and ivory. Throughout history, beauty has been a major goal. However, many cultures and peoples have different views of what beauty is.

This is what a banana should look like: Here’s how much favourite fruit and veg has changed – The Irish Sun THE fruit and vegetables that grace our supermarket shelves today look drastically different to those enjoyed by our ancestors, research has revealed. A startling new series of images illustrates these vast differences. According to Bruce Chasey, executive associate director of the Biotechnology Center at the University of Illinois, some of our produce has been modified so much that we now have a variety of crops that would never survive without human care. Just take a look at how different our much-loved fruit and veg is from their ancestors. Watermelons Humanity's forgotten return to Africa revealed in DNA Not so isolated: Khoisan tribes have European DNA (Image: Ariadne Van Zandbergen/Alamy) Call it humanity’s unexpected U-turn. One of the biggest events in the history of our species is the exodus out of Africa some 65,000 years ago, the start of Homo sapiens‘ long march across the world. Now a study of southern African genes shows that, unexpectedly, another migration took western Eurasian DNA back to the very southern tip of the continent 3000 years ago. According to conventional thinking, the Khoisan tribes of southern Africa, have lived in near-isolation from the rest of humanity for thousands of years.