Untitled. Key information for our class including a schedule of events, class PowerPoints, and assignments will be posted here for you to view and download. 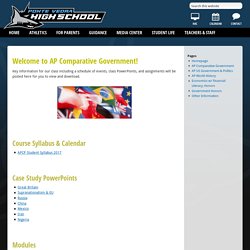 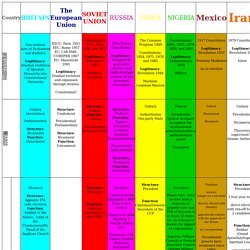 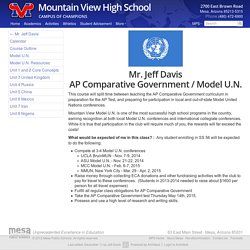 Jeff DavisAP Comparative Government / Model U.N. This course will split time between teaching the AP Comparative Government curriculum in preparation for the AP Test, and preparing for participation in local and out-of-state Model United Nations conferences. Mountain View Model U.N. is one of the most successful high school programs in the country, earning recognition at both local Model U.N. conferences and international collegiate conferences. While it is true that participation in the club will require much of you, the rewards will far exceed the costs! What would be expected of me in this class? Compete at 3-4 Model U.N. conferencesUCLA BruinMUN - Nov. 7-9, 2014ASU Model U.N. - Nov. 21-22, 2014MCC Model U.N. - Feb. 6-7, 2015NMUN, New York City - Mar. 29 - Apr. 2, 2015Raise money through collecting ECA donations and other fundraising activities with the club to pay for travel to these conferences.

AP Comparative Govt Outline. The AP Comparative Government and Politics course is a traditional college level introduction to the comparative study of state systems and their political components, and many of its topics speak to contemporary global political issues such as globalization, democratization, political change, public policy, and citizen-state relations. 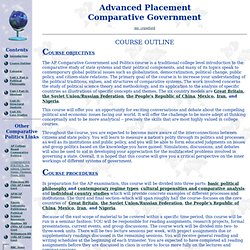 The primary goal of the course is to increase your understanding of the political traditions, values, and structures of comparative systems. The work involved concerns the study of political science theory and methodology, and its application to the analysis of specific countries as illustrations of specific concepts and themes. The six country models are Great Britain, the Soviet Union/Russian Federation, the People's Republic of China, Mexico, Iran, and Nigeria. This course will offer you an opportunity for exciting conversations and debate about the compelling political and economic issues facing our world. AP COMPARATIVE GOVERNMENT & POLITICS HANDOUTS. Comparative. Life Expectancy in Some U.S. Counties Is No Better Than in the Third World. There's little good news in a report on American life expectancy from the Institute of Health Metrics and Evaluation at the University of Washington. 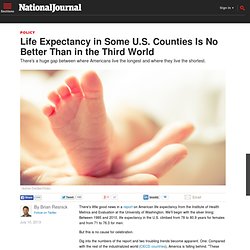 We'll begin with the silver lining: Between 1985 and 2010, life expectancy in the U.S. climbed from 78 to 80.9 years for females and from 71 to 76.3 for men. But this is no cause for celebration. Dig into the numbers of the report and two troubling trends become apparent. One: Compared with the rest of the industrialized world (OECD countries), America is falling behind. "These improvements are much less than what countries of similar income per capita have seen," the report states. But here's the thing. This is the second troubling aspect of the report: There's a huge disparity between the country's highest- and lowest-performing areas. The life expectancy of the U.S.' Life expectancy for males in 11% and for females in 14% of US counties was below that of Nicaragua. Bottom counties for life expectancy for females.