Animated interactive of the history of the Atlantic slave trade. 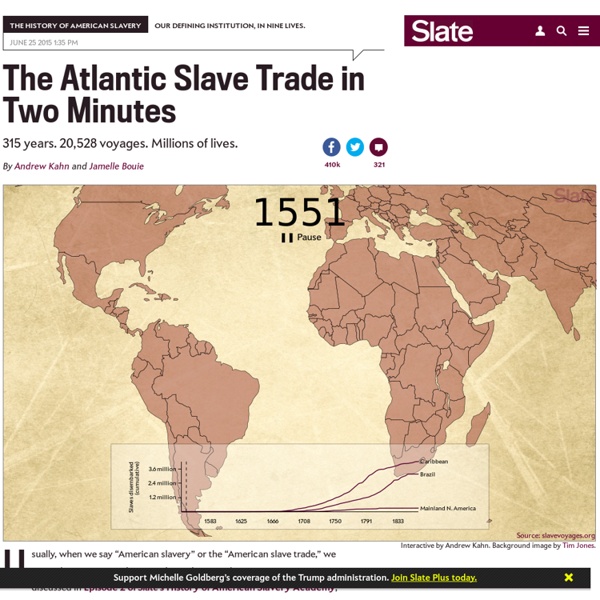 Source: slavevoyages.org For the full interactive version, use a larger device. Interactive by Andrew Kahn. Background image by Tim Jones. Usually, when we say “American slavery” or the “American slave trade,” we mean the American colonies or, later, the United States. But as we discussed in Episode 2 of Slate’s History of American Slavery Academy, relative to the entire slave trade, North America was a bit player. This interactive, designed and built by Slate’s Andrew Kahn, gives you a sense of the scale of the trans-Atlantic slave trade across time, as well as the flow of transport and eventual destinations. History of American Slavery, Ep 2: The Atlantic slave trade during its heyday and the remarkable life of Olaudah Equiano. There are a few trends worth noting. In the 1700s, however, Spanish transport diminishes and is replaced (and exceeded) by British, French, Dutch, and—by the end of the century—American activity. Enroll now in a different kind of summer school.

Global inequalities in population, wealth, and religious origin shown in six maps. This map of Canada shows the country's familiar vastness. A single line drawn across its deep south adds a surprising layer of information. The line runs well below the 49th parallel that constitutes that long straight stretch of U.S.-Canada border from Point Roberts, WA to Lake of the Woods, MN (see also #519). Split in two by the U.S. state of Maine poking north, the line traverses four eastern provinces, cutting off the southern extremities of Ontario, Québec and New Brunswick.

HISTORY OF SLAVERY The horrors of the slave trade do not go unnoticed in England, however hard the traders try to justify their activities (even, preposterously, proclaiming the care and consideration which they show to their precious cargo). The first sharp prick to the public's conscience comes in 1688 with the publication of Aphra Behn's novel Oroonoko (about the sufferings of an African prince and his loved one, transported by the English to slavery in Surinam). By this time the Quakers are already prominent in their condemnation of this inhuman trade, with the society's founder, George Fox, speaking strongly against it. In 1772 there is a landmark case when Lord Mansfield frees James Somerset, belonging to an American master, on the grounds that he has set foot in England.

The Birth of Israel At the end of World War II, the conflict over Palestine gained momentum. As early as 1942, the Yishuv, the Jewish community in Palestine, had turned to the United States for support of the Jewish state in Palestine. Even after the horror of the Holocaust, Britain refused to change its policy of allowing no further Jewish immigration. 8 Toxic Relationship Behaviours Mentally Strong People Avoid – Mystical Raven By Raven Fon Growing up, we learned almost everything we would need to have a gratifying and prosperous life- everything except how to cultivate a healthy relationship. As we get older, we are given very little guidance as far as relationships go- well, very little helpful guidance. There are always reality shows and beauty magazine quizzes.Buy an “Intelligence is sexy” t-shirt! We have unattainable romantic notions filling our heads from a young age with no clarity on the reality of it all.

Rosa Parks and the Montgomery Bus Boycott Rosa Parks rode at the front of a Montgomery, Alabama, bus on the day the Supreme Court's ban on segregation of the city's buses took effect. A year earlier, she had been arrested for refusing to give up her seat on a bus. On a cold December evening in 1955, Rosa Parks quietly incited a revolution — by just sitting down. She was tired after spending the day at work as a department store seamstress. She stepped onto the bus for the ride home and sat in the fifth row — the first row of the "Colored Section."

The birth of Israel The former BBC Middle East correspondent, Tim Llewellyn, looks back at the history of Israel. The contrast between the growing Jewish society in Palestine - the Yishuv - and the indigenous, mainly Muslim Arab population could not have been greater. In 1917, two-thirds of the roughly 600,000 Arab population, were rural and village-based, with local, clannish loyalties and little connection with the towns. People-Pleasing: The Hidden Dangers of Always Being “Too Nice” - by ALETHEIA LUNA You feel the pressure throb in your veins. A lump rises in your throat as your colleagues watch you closely. They are expecting an answer. They are expecting you to comply.

Ancient Irish Genomes Reveal Massive Migrations To The British Isles Researchers sequencing the genomes from prehistoric Irish individuals for the first time – a female farmer and three men who lived several thousand years ago – reveal genetic changes that parallel the onset of the Neolithic and Bronze Age transitions in Ireland. The findings are published in Proceedings of the National Academy of Sciences this week. The Neolithic transition, marked by the advent of farming, was thought to have arrived in Ireland around 3750 BCE. This was followed by the Bronze Age and the introduction of metalworking around 2300 BCE. For decades, researchers have debated over whether these two major cultural shifts were triggered by waves of immigrants from the Near East or the adoption of agriculture by local people who had been on the British Isles during the earlier Mesolithic period. Despite showing traces of hunter-gatherer ancestry, bones of the Neolithic female suggest she descended from a large group of early farmers who came to the island from the Near East.

A Real Map of the Middle East Could this map be any more different from the previous one discussed on this blog? That one dealt with the water, wetlands and shifting shorelines of Louisiana. This one zooms in on lines in the sand of the Middle-Eastern desert. Yet both maps do something similar: knowing that our current maps no longer reflect reality, they replace their conventional wisdom with a new cartography, based on the new facts on the ground.

The Civil Rights Act of 1964 and the Equal Employment Opportunity Commission Background In the 1960s, Americans who knew only the potential of "equal protection of the laws" expected the president, the Congress, and the courts to fulfill the promise of the 14th Amendment. In response, all three branches of the federal government--as well as the public at large--debated a fundamental constitutional question: Does the Constitution's prohibition of denying equal protection always ban the use of racial, ethnic, or gender criteria in an attempt to bring social justice and social benefits? In 1964 Congress passed Public Law 88-352 (78 Stat. 241).

History of chess - Wikipedia Real-size resin reproductions of the 12th century Lewis chessmen. The top row shows king, queen, and bishop. The bottom row shows knight, rook, and pawn. The history of chess can be traced back nearly 1500 years, although the earliest origins are uncertain. The earliest predecessor of the game probably originated in India, before the 6th century AD; a minority of historians believe the game originated in China.